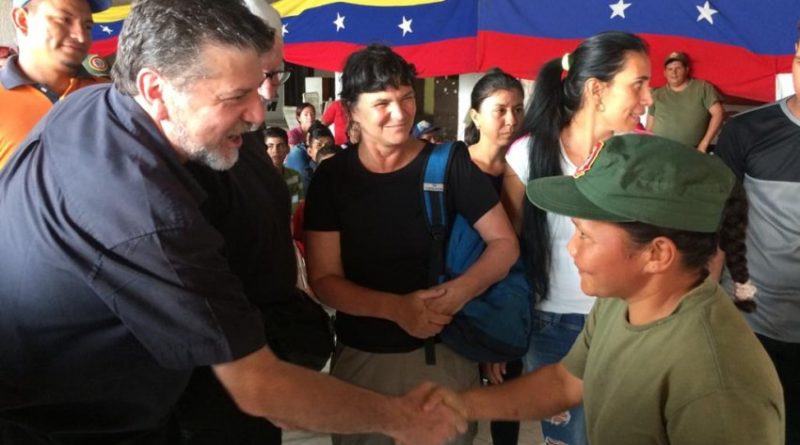 As the United States ratchets up its sanctions on Venezuela, organisations in Australia are stepping up efforts to promote people-to-people solidarity.

Since 2014, the US has imposed more than 300 unilateral measures on Venezuela, including new sanctions last month on its state airline CONVIASA and on Russian state energy giant Rosneft for its dealings with Venezuela’s oil company PDVSA.

The blockade, which seeks to strangle Venezuela’s economy with the aim of bringing down the government, has cost the South American nation an estimated US$116 billion and as many as 40,000 lives.

In response, a solidarity delegation organised by the Venezuela Solidarity Campaign (VSC) and the Latin Solidarity Network (LASNET) visited Venezuela in January/February to see first-hand the impact the blockade is having on the Venezuelan people.

With the help of the Bolivar and Zamora Revolutionary Current (CRBZ), the three travelled to various parts of Venezuela to see how the country’s economic crisis and the sanctions were affecting people and how communities were organising to overcome them.

They were also able to hand over funds that had been raised by VSC, LASNET and the Australia-Venezuela Solidarity Network (AVSN) for projects being run by Venezuelan social movements.

Speaking to Green Left, CRBZ’s Katherine Delgado said of the delegation: “We are extremely grateful for this gesture of solidarity by Australian social organisations and unions that are following events in Venezuela and that have come here to see the reality the establishment won’t show.”

Among the projects that received funds is a social-political agroecological school run by the CRBZ.

Delgado said the group was “very grateful for the concrete solidarity shown in terms of the help provided for our agroecological school,” where farmers get the opportunity to learn how to produce in an environmentally-friendly and collective manner.

Funds were also handed over for an audiovisual project, “Communes to the helm”, run by the National Network of Comuneros y Comuneras (commune activists). It aims to produce a series of videos documenting how communities are empowering themselves to overcome the crisis by organising into communal councils and communes.

National Network of Comuneros’ Atenea Jiménez told GL “the solidarity we have received from our brothers and sisters in Australia has been of great help”.

She explained the money raised had been used to “buy a camera, tripod and memory drive and to upgrade our editing equipment” for the project, “with the aim of recording the processes of communal construction underway.

“Right now, we have begun working on an alternative energy project that involves installing solar panels in rural areas.

“We hope that through our project we can show others what is possible if we organise ourselves, together with the strong bonds of solidarity we have with other peoples of the world.”

Commenting on the importance of this solidarity, Jiménez said: “Venezuelan workers are living through one of the most difficult moments of our history.

“Knowing that we have the support of other peoples around the world and being able to count on concrete solidarity such as this that goes beyond just words, is for us the realisation of working-class internationalism.

“It is something that we especially treasure and value.”

Delgado agreed: “This solidarity is important, in fact key for the times we are in, in which the Venezuelan people and the country are been attacked and economically blockaded.

“The reality is that the measures the US government has taken do not impact on the government but rather on the people, the great majority who find themselves in a state of vulnerability.

“These gestures are beautiful acts of solidarity because they show that those who are on the side of the disadvantaged, even with the little they have, are helping those who have even less, in our case due to the blockade.

“We want to strengthen these bonds to help us remain strong and let the Venezuelan people know what is happening in other countries.

“In doing so we are, little by little, breaking the blockade imposed on us by the US and large corporations.

“It is up to us as social movements to building solidarity from below so that together we can confront the capitalist system that is killing humanity and planet.”

[Federico Fuentes is an AVSN national co-convenor. The AVSN is organising a fundraising film night, showing “Venezuelans under siege” on April 4, 6pm at the Sydney Resistance Centre, 22 Mountain St, Ultimo. If you would like to contribute in some way to these and other solidarity fundraising projects contact AVSN or VSC via Facebook.]

Featured image: The 2020 Venzuela solidarity delegation visited communities engaged in grassroots organising against the impacts of the US blockade. Photo: Katherine Delgado.