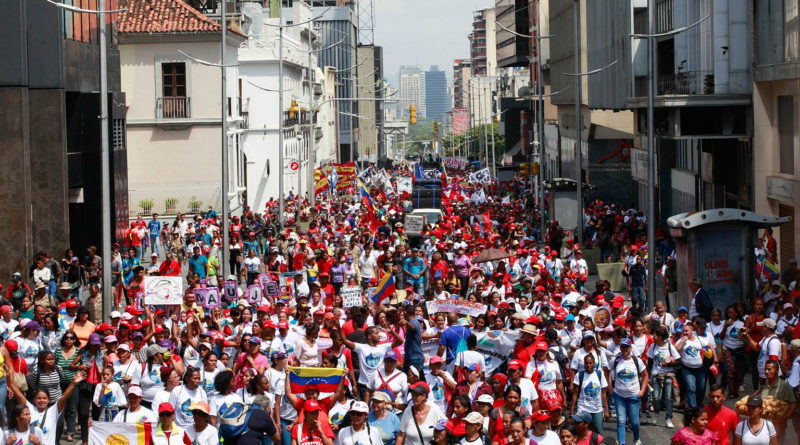 In Venezuela a march was organized last Sunday as part of the celebration for the International Women’s Day to pay tribute to the female gender, which was convened by the Minister for Women and Gender Equality, Asia Villegas, to emphasize the feminine demand promoted by the Bolivarian government. Representatives of Unamujer, as well as the Humanized Childbirth Plan, leaders of feminist movements, street bosses, workers of state institutions, women from different parts of the country, and of different ages departed from Plaza Morelos in Caracas, to celebrate their day. Villegas since last Wednesday had already considered the destination of the march by pointing out “We will do a floral offering to our father Liberator, Simón Bolívar, and to all the heroines buried in the National Pantheon, such as La Negra Matea, Luisa Cáceres de Arismendi, La Negra Hipólita, the indigenous Apacuana leader, Teresa de la Parra and all the heroines that continue the struggle in the Bolivarian nation.” One of those attending the demonstration said that “this group of women is accompanying the struggle of President Maduro and giving the battle for a better progress.”

On behalf of Unamujer-Aragua, Katiuska Rosario said that “in Venezuela, women are Chavez, thanks to Maduro we will maintain our beloved independent and sovereign homeland; Let the women of the world know that their Venezuelan sisters are in struggle, battle and victory. The vice president of the Bolivarian Republic of Venezuela, Delcy Rodríguez, took the opportunity to express “what would become of our country if it fell into the hands of those lackeys. We are defending the future of Venezuelans, but also the future of the sovereignty of the peoples of the world.”

Those attending the march recognized the work of the Bolivarian government to respect and guarantee fundamental human rights for women. In addition, they reiterated the importance that Commander Hugo Chávez had for the progress of Venezuelan women, in this sense the representative of the United Socialist Party of Venezuela (Psuv), Ileana Rodriguez said “let’s be loyal to the legacy of Chávez, a man who made possible the vindication of women, that is why we continue working for a free homeland.”