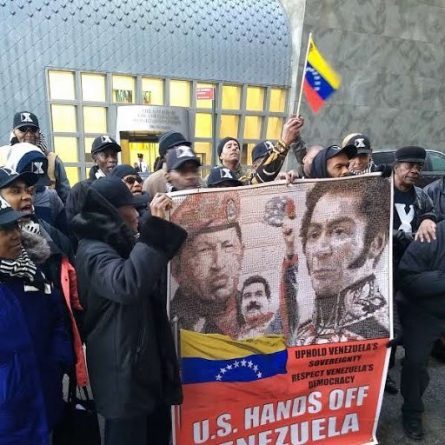 In a bold show of support for President Nicolás Maduro and Bolivarian Venezuela, over 100 people demonstrated in front of the U.S. Mission to the United Nations on Feb. 4.

The militant action was called by the December 12th Movement. Chants of “People of the world unite! Venezuela is our fight!” and “Down with imperialism! Power to the people!” were shouted in the U.N.’s shadow.

A leaflet handed out by December 12 members declared:  “We are here because U.S. Secretary of State Pompeo has finally told the truth ― the U.S. wants control of Venezuela’s oil.

“We are here because the U.S. wants to steal oil, discredit socialism and carry out regime change in Venezuela ― then on to Bolivia, Nicaragua, Cuba.

“We are here because as African people we’ve benefited from the subsidized oil that Venezuela provided our communities in the U.S., in the Caribbean and in Africa.” Among those who spoke in defense of Venezuela was Pam Africa of the International Concerned Family and Friends of Mumia Abu-Jamal. She pointed out that the wealthy, who hate Venezuela’s revolution, just let 15 people freeze to death in Chicago. On the other hand, the free heating oil that has been supplied by Venezuela must have saved dozens of lives.

“We have to shout that we are Venezuela,” declared D12 Chairperson Viola Plummer. “There are millions of us and just a few bloodsuckers,” she declared.

The Reagan administration tried to frame Plummer as part of the New York 8 conspiracy case. D12 leaders Omowale Clay and Roger Wareham, who spoke at this rally, were also tried in that case.

Now Trump and all the imperialists are trying to frame up Venezuela and its elected president.

A speaker from Komokoda (the Committee to Mobilize Against Dictatorship in Haiti) described how Venezuela had given billions of dollars in aid to Haiti, aid that was stolen by the U.S. puppets there.

Nellie Bailey of the Black Agenda Report reminded protesters that, like the murdered Libyan leader Muammar Gaddafi tried to do, Venezuela is getting rid of dependence on petrodollars. U.S. banks hate that.

“They hate the Bolivarian revolutionary government because it uses the country’s oil wealth to provide homes, schools and health care to the workers and oppressed rather than pay it out in tribute to Wall Street banks and oil companies,” explained Bill Dores of Project Solidarity. “Shouldn’t we have a government that does that?”