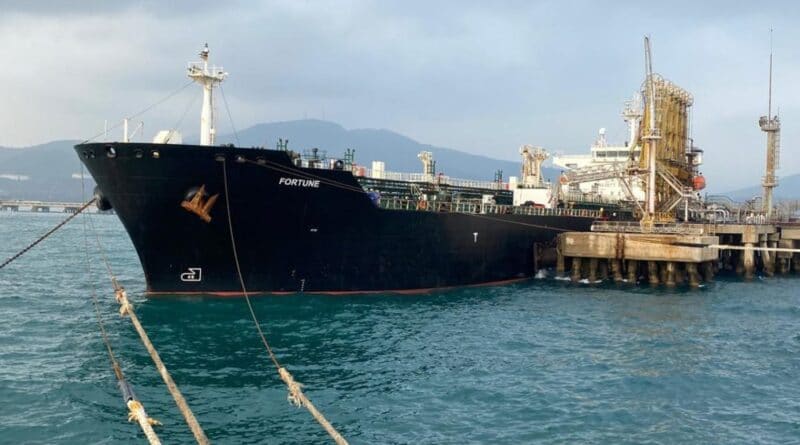 A fleet of Iranian fuel tankers is reportedly en route to the Caribbean nation.

The latest OPEC monthly report placed the country’s production in November at 407,000 barrels per day (bpd), according to secondary sources. The figure represents a 25,000 bpd increase compared to October.

The numbers reported directly by state oil company PDVSA stand slightly higher at 434,000 bpd, but down from 473,000 bpd the previous month.

The output from the country’s main export industry has fallen sharply under the weight of crippling US sanctions, going from an average of 1.9 million bpd in 2017 to 796,000 bpd in 2019 before nearly halving in early 2020.

The US Treasury Department has levied successive rounds of unilateral measures targeting Venezuela’s oil sector. After financial sanctions in August 2017, Washington imposed an embargo in January 2019 before going after shipping companies and vessels in an attempt to shut down crude exports.

The US has also taken aim at multinational corporations dealing with PDVSA, slapping secondary sanctions against Russian energy giant Rosneft in March. In the lead up to the US presidential elections, the Trump administration moved to forbid crude-for-fuel swap deals, threatening companies such as Spain’s Repsol and India’s Reliance Industries into winding down their activities in Venezuela.

However, oil giant Chevron and a number of oil service providers such as Halliburton have had their sanctions waivers extended until June 2021. Chevron currently runs four joint ventures with PDVSA, the largest being Petropiar in Venezuela’s Orinoco Oil Belt.

The incoming Biden administration has yet to express a position regarding its Venezuela policies. While some insiders have stated that sanctions will continue being used as a “weapon,” Bloomberg reported that the Biden White House could engage in negotiations with Caracas. For its part, Venezuelan President Nicolas Maduro has called for dialogue and improved relations.

The mounting obstacles resulting from US sanctions have forced Venezuela to deepen cooperation with Iran. Tehran has sent several fuel shipments to help mitigate widespread shortages, with a ten-tanker fleet reportedly due to arrive in the coming weeks. Iranian tankers have also loaded Venezuelan crude despite being forced to disguise the operation before rerouting cargoes.

Iran has likewise collaborated with PDVSA by sending condensate required to blend extra heavy crude into exportable grades, as well as offering technical assistance to restart the country’s refineries.

US sanctions and a lack of maintenance created an imminent disaster, with the Nabarima floating storage and offloading facility (FSO) reportedly at risk of spilling its 1.3 million barrel crude cargo.

The Nabarima belongs to the Petrosucre joint venture where Italy’s ENI holds a 26 percent stake. The Italian company required permission from the Treasury Department to unload the oil without violating sanctions. PDVSA started transferring the cargo this week, with the operation expected to take two months approximately.