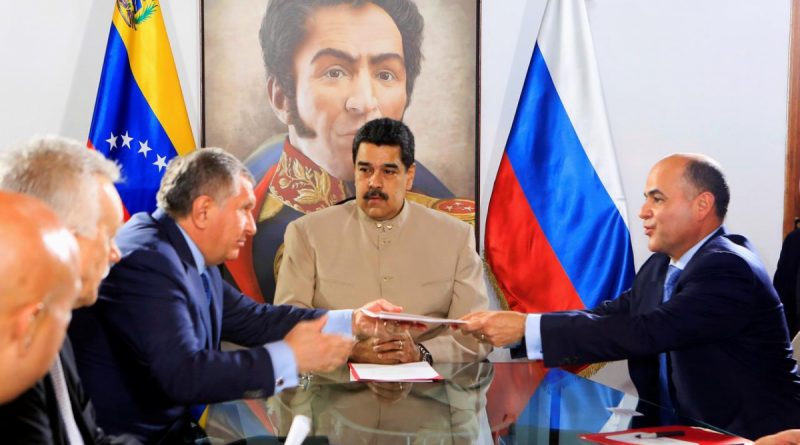 Rosneft will reportedly invest in natural gas production in Venezuela.

The bond, issued by state oil company PDVSA, is currently in default after a deadline for a $913 million payment expired on Monday.

“Plaintiffs seek a judgment declaring that certain notes issued by PDVSA … are invalid, illegal, null and void ab initio, and thus unenforceable,” the filing reads, according to Reuters.

The opposition-controlled National Assembly (AN) had previously declared the bond illegal, arguing that it was emitted without the permission of parliament. Under Venezuela’s constitution, all new sovereign debt must be approved by the AN, though PDVSA has customarily had autonomy over its borrowing.

After taking office in January 2016, the AN’s opposition leadership refused to approve new foreign debt despite the country undergoing a crisis triggered by the collapse of global oil prices. The legislative body was later declared in contempt amid an escalating dispute with judicial authorities.

Analysts have pointed out that the opposition’s claim is weakened by the fact that the National Assembly made a $71 million interest payment earlier this year.

The lawsuit was filed in U.S. Federal Court for the Southern District of New York, naming MUFG Union Bank, the bond’s trustee, and GLAS Americas LLC, the collateral agent, as defendants. PDVSA, represented by a Guaido-appointed ad-hoc board, is named as plaintiff, alongside, two of its subsidiaries.

Reuters reported that the filing likewise requests an injunction blocking bondholders from seizing shares from PDVSA’s US subsidiary, CITGO. 51 percent of CITGO shares were pledged as collateral on the PDVSA 2020 bond.

The lawsuit comes days after the Trump administration temporarily shielded CITGO from seizure by creditors. An order issued by the Treasury Department blocked any transactions of CITGO shares relating to the PDVSA 2020 bond until January 22. Apart from the defaulted bond, CITGO also faces threats of seizure from Canadian mining giant Crystallex. In September, a US appeals court ruled that Crystallex could begin seize of CITGO shares as payment for a $1.4 billion arbitration award.

After proclaiming himself “interim president” in January and being immediately recognized by Washington and its allies, Guaido moved to take control of Venezuelan assets abroad and named ad-hoc boards for several companies, including CITGO. Control of the company has been disputed in US courts.

The Venezuelan government has not made any public statements regarding the PDVSA 2020 bond, although President Maduro has recently called for the country’s foreign debt to be renegotiated. Previous renegotiation attempts were scuppered by US financial sanctions.

“The current agreement [with Rosneft] is changed to include incentives which already exist in the country’s oil sector. Rosneft will take part in very important offshore natural gas projects,” ANC deputy Jesus Farias said during the session.

Farias went on to add that the incentives were necessary since Rosneft’s investments were defying US sanctions. Venezuela has the largest natural gas reserves in Latin America, but its holdings remain largely unexplored.

Venezuela and Russia have further strengthened ties in recent months. In September,Maduro visited Moscow, securing investment in a number of different fields.

Russian state oil giant Rosneft has moved to supplant other foreign companies driven away by US sanctions, buying crude from PDVSA and rerouting it to other customers.

Since January, Washington has ratcheted up already tough economic sanctions in place since 2017, imposing an oil embargo, which was expanded to a general embargo prohibiting transactions with the Venezuela state and authorizing secondary sanctions against third party actors.

Faced with a severe economic crisis that has seen GDP contract by 63.6 percent since 2014, the Maduro government has scrambled to secure foreign investment by offering ever more favorable conditions, including tax breaks, special economic areas and guarantees against nationalization.