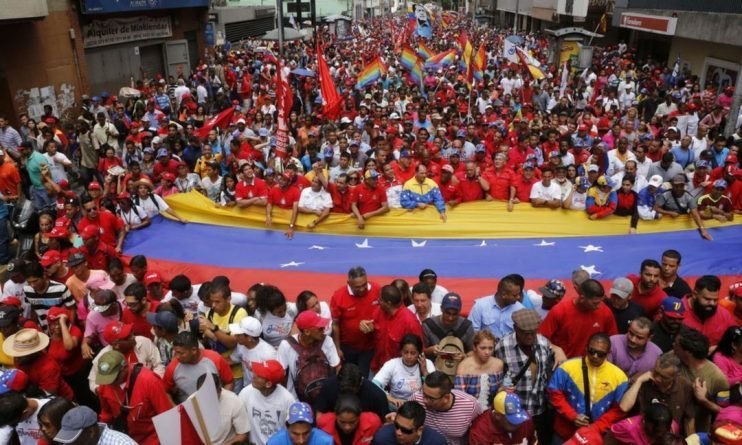 On April 30, self-appointed “interim president” Juan Guaidó attempted a coup against the Chavista government of Venezuela. Support from Washington was swift, with U.S. Vice President Mike Pence immediately tweeting “We are with you!”

The coup attempt appears to have been defeated. Guaidó’s forces are scattered. Leopoldo López, a co-conspirator, is hiding in the Spanish Embassy. Calm has returned to Caracas. Hundreds of thousands gathered for a May Day show of support for the Bolivarian Revolution. But Guaidó is calling for continued attempts to force President Nicolás Maduro from office.

Guaidó’s actions this week and earlier this year were geared toward splitting the Venezuelan armed forces. On April 30, he issued another appeal — echoed by Trump administration figures — for military leaders to defect. So far, the right-wing has no significant military support.

The attempted coup began in the early morning hours. A handful of traitorous officers together with Guaidó “freed” López, who had been under house arrest at his home in the posh Chacao district of Caracas for his role in inciting violence in 2014 that resulted in several deaths.

At least some of the troops who were initially with Guaidó had been tricked. They rejoined their comrades in the Bolivarian army as soon as it became clear what was really going on. TeleSUR tweeted video of these same soldiers excitedly testifying about how they were lied to by two commanding officers, and how they then escaped.

Most of the fighting occurred outside the La Carlota Air Base, where Guaidó announced to the privately owned, right-wing press that they had taken control of the base. That was not even close to true.

The handful of soldiers that were still participating with them fired shots into the air for the benefit of the cameras. Chavista soldiers responded with volleys of tear gas to keep them from entering the base. There were skirmishes that took place in the Altamira Highway Interchange area outside the base which were captured by the media, and supporters of Chavismo fought with right-wing coup supporters in a number of places throughout Caracas.

In the meantime, President Maduro and other Chavista government forces encouraged Venezuelans to gather near the presidential palace to show their support for the Bolivarian revolutionary process. Many thousands turned out, just as they had in response to a 2002 coup attempt against the late president Hugo Chávez.

Huge Chavista rallies at the palace have become a familiar sight in Caracas since Chávez became president in 1999. For hundreds of thousands of people in Venezuela, the changes that have been implemented by Chávez and by current President Nicolás Maduro have meant roofs over their heads, access to medical care, literacy and enough income to feed their families — in many cases for the first time in their lives. Those Venezuelans who have been lifted from poverty are the powerful base of support for Chavismo.

Many remember how in 1989, when an economic meltdown caused spiking prices of gasoline and food, a righteous rebellion of the people was met by martial law and bloody repression. Hundreds were injured and many jailed. Most Venezuelans refuse to go back to those times.

It isn’t the paltry gathering of the privileged in motion around Guaidó that are the real threat to the revolution. It is U.S. imperialism — with all the wealth and resources that it has stolen from around the world at its disposal — that continues to sabotage and attack the gains of Venezuela.

According to a report by the Center for Economic and Policy Research, Washington’s sanctions have already caused 40,000 deaths. Now they’ve begun blocking oil shipments from Venezuela to revolutionary Cuba, which has also been targeted by a brutal U.S. economic blockade for decades.

In January, the Bank of England blocked Venezuela’s Central Bank from withdrawing its $1.2 billion in gold reserves — 15 percent of its total foreign reserves.

In February, Citgo, the U.S.-based subsidiary of Venezuela’s state-owned oil company Petroleos de Venezuela, was seized by a U.S. board of directors. Citgo has $23 billion in annual sales and $500 million in cash reserves.

Sanctions, the seizure of the gold reserves and control of Citgo this year have been at the behest of Washington in order to steer the Venezuelan people’s revenue and assets into the hands of Guaidó and company.

The U.S. ruling class has been frustrated so far in its long campaign to sink its imperialist claws deeper into the skin of Latin America by retaking Venezuela. The Bolivarian armed forces have remained loyal, and despite the hardships caused by U.S. economic warfare, the overwhelming majority of the Venezuelan people show every indication that they will fight for their sovereignty. The Chavista forces have organized a people’s militia that is growing stronger every day.

But none of that means that a military attack of some kind won’t happen. Right-wing governments of neighboring Colombia and Brazil could be used by the U.S. The founder of Blackwater, a private military contractor now known as Academi, has been lobbying for an invasion using 5,000 mercenaries. And even a direct U.S. invasion can’t be ruled out.

U.S. Secretary of State Mike Pompeo said on May 1, “The president has been crystal clear and incredibly consistent — military action is possible — if that’s what’s required — that’s what the United States will do.”

These options are not without great risk for U.S. imperialism. Working-class people of the region have a long and proud history of resistance. And a renewed working-class, anti-war struggle in the U.S. could be triggered in the event of a U.S. military attack on the Venezuelan people.

All solidarity with Venezuela!