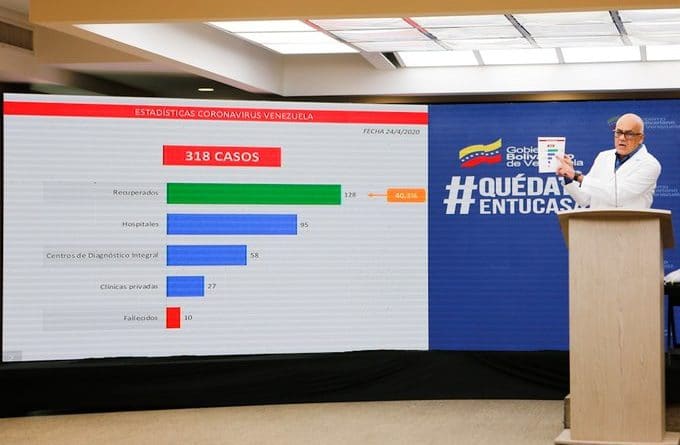 Venezuelan minister of communications Jorge Rodríguez, reported on Friday seven new positive cases of Covid-19 in Venezuela. These are 4 cases in Nueva Esparta from the Roberto Vahlis baseball school hotspot, and the other three are from Táchira state. To date, 318 cases have been recorded in the country.

Of the 318 infected, 97 are from the Nueva Esparta state. He said that most of those infected are due to non-compliance with the quarantine that the President of the Republic, Nicolás Maduro, and his government instructed.

In a Venezuelan television broadcast from the Miraflores Palace, Rodríguez reported that as of this Friday, 128 people have recovered (40.3 percent of the total), 95 are in sentinel hospitals, 58 in Comprehensive Diagnostic Centers (CDI) and 27 in private hospitals. Total deaths are 10. The vast majority of Covid-19 cases are in the 20-49 age range. 178 are men and 140 are women.

In Táchira, he reported the following cases:

He indicated that mismanagement of the infection in Colombia has become a threat to Venezuela. “We will be much more alert” in the event that the Colombian government ignores the warnings and relaxes the quarantine in the coming days.

In Nueva Esparta state, he reported that, out of the 4 new cases, there is a girl and a teenager, children of Coast Guard officials from that area, who were acting as guardians in the Gómez and Arismendi municipalities. He insisted that Nueva Esparta state became the state with the largest number of people infected with Covid-19 due to the actions of the owners of the baseball academy, who failed to comply with the quarantine.

RELATED CONTENT: How are Poor Venezuelans Resisting the Economic Crisis?

He noted that if the rules had been followed at the baseball academy, there would have been 221 cases of Covid-19 in Venezuela and not 318.

Rodríguez reiterated the need to use the mask, “it has already been demonstrated that the permanent use of the mask when there are encounters between people and on public roads, really prevents the transmission of the coronavirus. Walking down the street without a mask is like driving while intoxicated,” said the sector vice president.

He confirmed that the Bolivarian government, with its medical team, has visited more than 200 thousand homes to screen for cases of the Covid-19 coronavirus. Rodríguez recalled that the visits have been made since March 15. “In addition, since March 15 we have been conducting a survey by the Patria system that more than 18 million people have already answered,” he added.

Venezuela has managed to contain the pandemic, despite publications by Colombian and US media, which say that the country is not prepared to face Covid-19, said the sector vice president. He pointed out that there are more than 118 thousand officials activated to attend to the people house by house, in order to guarantee that the virus remains under control.