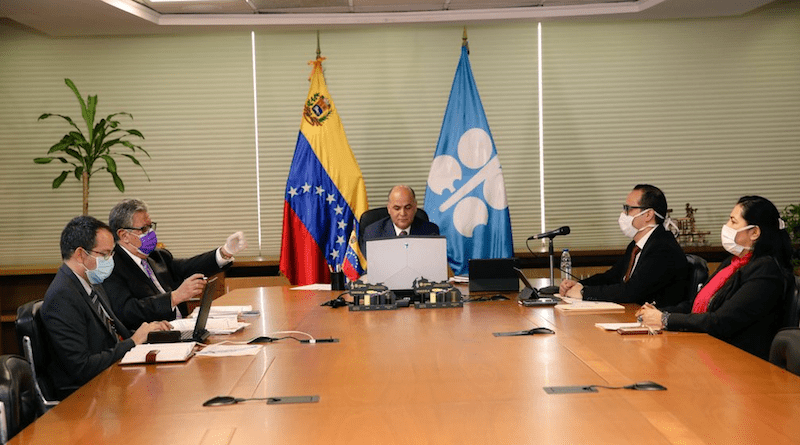 This Thursday during the ninth summit of the Organization of Petroleum Exporting Countries Plus (OPEC +) that took place through a videoconference, Venezuela showed its support for the initiative of Saudi Arabia and Russia to take decisive actions to stabilize the market oil.

The Minister of Petroleum, Manuel Quevedo, stated through his twitter account @MquevedoF, that during the Special Meeting OPEC + Venezuela showed its support for the initiative of both countries that aims to stabilize the oil market in the face of the impact of the global pandemic.

For his part, Prince Abdul Aziz Bin Salman, Minister of Energy of Saudi Arabia, achieved the commitment of OPEC and Non-OPEC countries to stability and the world oil market, particularly during these difficult times.

Meanwhile, OPEC General Secretary, Mohammad Barkindo, said that in the course of recent months, the COVID-19 impregnated has almost every aspect of life and acknowledged that oil market fundamentals have improved since the last meeting on March 6.

He assured that the challenges for the world oil market are happening because just a month ago, at the meetings in Vienna, the expected growth of world GDP in 2020 was 2.4% and it is currently 1.1% negative. “It is incredible to think that the global contraction is much greater than that of the global financial crisis of 2008-2009.”

He added that in early March, the expected growth in global oil demand in 2020 was just below 0.1 mb / d. “Today, we are seeing a contraction of 6.8 mb / d, with the second quarter only close to 12 mb / d and expanding. These are amazing numbers! Unprecedented in modern times,” he said.

He explained that the prospects for growth in non-OPEC supply in 2020 have also been reduced by more than 1.5 mb/d, although this is not close to the drop in oil demand.

He acknowledged that the OPEC benchmark basket has fallen from $ 52.7 / b in March 2020 to less than $ 20 / b in early April, a decrease of around 70%. “We are all now seeing less significant income on our treasuries.”

“To put this in some context, the OPEC Secretariat’s assessment of global available oil storage capacity exceeds one billion barrels. Given the current unprecedented supply and demand imbalance, there could be a colossal excess volume of 14.7 mb / d in 2Q20. This excess supply would add another 1,300 million barrels to world crude oil inventories and, therefore, would exhaust the global storage capacity of crude available in the month of May,” Barkindo explained.

“All producers here, OPEC , OPEC + and other producer nations who have taken it upon themselves to responsibly join in on today’s meeting, must remember the serious market imbalance of 2014-2016. It was when the oil producers lost trillions of dollars in income, and globally more than $ 1 trillion was lost in terms of investment,” he pointed out.

He called on oil producers to see the market outlook presented, and stand shoulder to shoulder to help this vital global industry survive. “For the current quarter, around 15% of world oil consumption has evaporated and this huge market imbalance must be urgently addressed,” he said.