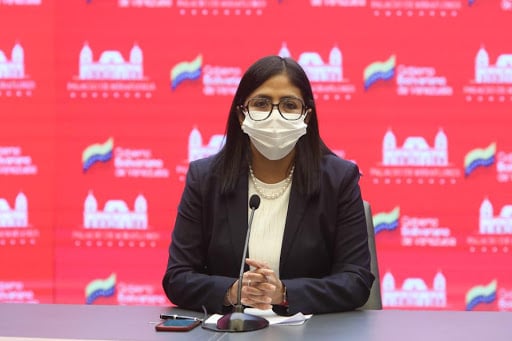 The vice president of Venezuela, Delcy Rodríguez, proposed on Tuesday a “conditional offer” for the payment of bonds of state companies Petróleos de Venezuela (PDVSA) and Electricidad de Caracas, in order to guarantee that investors are not affected by US sanctions that, since 2017 have prevented the restructuring of the Venezuelan debt.

According to Rodríguez, the proposal will only take effect if the bondholders representing more than 75% of the principal amount approve the offer, send a letter of acceptance, and agree to suspend pending claims that have advanced towards legal proceedings against the country.

Rodriguez announced a “conditional offer” for bondholders for a deal that would suspend statutes of limitation contained in the bond agreement. Rodriguez added that those statutes were close to expiring, at which point the bondholders would lose certain legal rights as creditors.

The vice president stressed that bondholders may require a license or regulatory approval to accept the offer, so the country will collaborate with investors in their efforts to achieve such consent.

The Venezuelan authority highlighted that investors will have until midnight on October 13, 2020 to decide whether or not to accept the offer. “Acceptances received after that date and time will be rejected,” she emphasized.

Rodríguez invited those involved to “review in detail” the proposal. “It is a new show of action in good faith and a spirit of cooperation, in order to continue advancing in a restructuring process that allows safeguarding the rights of creditors, without affecting the process of growth and economic recovery in Venezuela.”

The vice president recalled that Venezuela has been characterized by “faithful compliance” with its foreign debt services’ payment obligations, “despite multiform criminal US aggression.”

In November 2017, President Nicolás Maduro called on investors to start the debt restructuring. However, US president, Donald Trump, signed an executive order that prohibits doing business with the new debt and Venezuela’s equity issues or its state oil company PDVSA, as well as with some existing bonds.

At that time, the US Treasury Department also warned bondholders that negotiating with entities in the sanctioned lists would be “problematic”, would carry penalties of up to 30 years in jail and millions of dollars in fines.