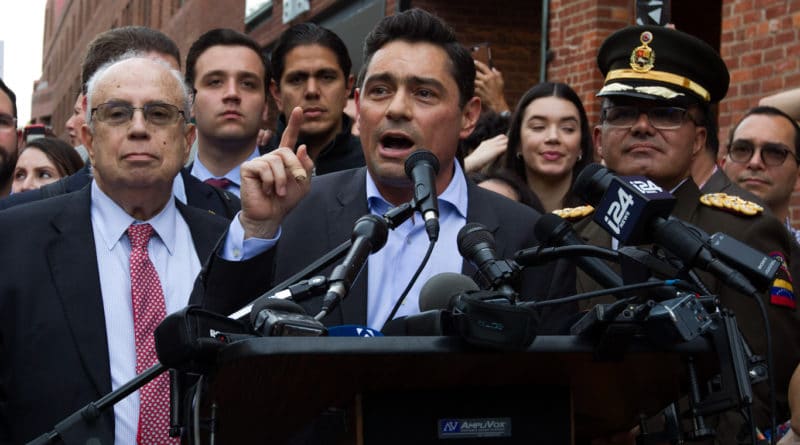 The new embassy is a microcosm of Juan Guaidó’s attempted premiership; backed by the U.S. but existing only in theory, with the Maduro government still holding office.

After evicting the Embassy Protectors, the Venezuelan embassy in Washington D.C. reopened yesterday under new ownership, as new “Ambassador” Carlos Vecchio and other allies of U.S.-supported anti-president Juan Guaidó moved into the building. Yet despite the façade of normalcy, there were a number of problems with the situation in the plush Georgetown district of the capital.

Firstly, the “ambassador” was neither appointed nor even recognized by the government of Venezuela, only by the United States, who attempted to overthrow democratically elected President Nicolas Maduro at least four times in 2019 (each with less success than the last).

Secondly, the embassy is not able to carry out any normal functions, such as granting visas. Thirdly, the entrance was surrounded by antiwar activists, protesting its reopening as a farce. Even the police officer guarding the property could see the bizarre nature of the situation, telling journalist Anya Parampil on camera “it’s not an actual working embassy.

Even as Vecchio and his Washington-funded team were settling in, activists from the feminist anti-war group CODEPINK arrived to theatrically read them their own eviction notice, as the U.S. government had done to them last year.

“The Embassy Protection Collective is giving you a thirty-day notice to vacate,” they said, as they found Vecchio guilty of the following offenses:

CODEPINK claimed that under normal circumstances Vecchio could appeal the ruling, but “given that there are no other fake ambassadors in the world” they would simply have to go back to Venezuela, warning them that if they damaged the building they were illegally occupying they would be made to chant socialist slogans in front of the U.S. Capitol as punishment.

Virtually unheard of in Venezuela until last January, right-wing opposition figure Juan Guaidó shot to fame when he publicly declared himself president of the country, despite never having run for the office.

Through a series of tactics, including inciting public demonstrations and calling on the military to rebel, Guaidó attempted a number of coup attempts throughout 2019, but to no avail. Opinion polls show his public approval hovers at around 10 percent. After widespread allegations of embezzlement of tens of millions of dollars of U.S. taxpayer money, Guaidó was dropped even by his own political party, who expelled him last month.

While deeply unpopular inside Venezuela, he has retained the unflinching support of both party establishments in Washington, and of corporate media. The Venezuelan was a guest of honor at Trump’s recent State of the Union speech where he described him as a “very brave man who carries with him the hopes dreams and aspirations of all Venezuelans.” Both Democrats and Republicans rose as one to give him a standing ovation. But in contrast, Guaidó was met with jeers and pelted with food by enraged crowds upon his return to Venezuela, chased away amid cries of “traitor” and “fascist.” This incident was described as “being greeted by a throng of cheering supporters” in the Western press.

As part of its support for his bid for power, the Trump administration forced all Venezuelan diplomats to leave the country, recognizing Guaidó’s associate Carlos Vecchio as the true ambassador. Before they left, however, the Venezuelans invited dozens of anti-war activists to occupy and defend their D.C. embassy from Vecchio. At its height over 70 stayed around the clock.

They were subjected to attacks from the police and the government, who cut off the electricity and water to the building, bombarding them with light and sound cannons. After a long standoff, police arrested the last remaining activists in May last year. Last week the Embassy Protectors were put on trial and faced a year in prison and a six-figure fine each and were effectively prohibited from defending themselves. Nevertheless, the prosecution was unable to force through a guilty verdict and the case ended in a mistrial.

The new embassy is a microcosm of Guaidó’s attempted premiership; backed by the U.S. but existing only in theory, with the Maduro government still holding office, supported by Western elitists but rejected by Venezuelans and constantly upstaged by activists.