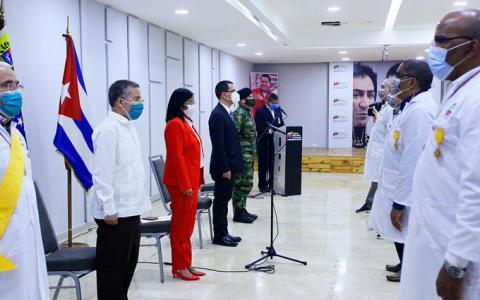 August 19, 2020.- This Tuesday the Bolivarian Government of Venezuela awarded the delegation of Cuban doctors present in the country, for their contribution in the fight against the COVID-19 pandemic in that South American nation, as reported by Telesur.

With the Order Francisco de Miranda, the Venezuelan government recognized the work of the island’s professionals, who have saved thousands of lives through the Barrio Adentro Mission.

At the meeting, Venezuelan Vice President Delcy Rodriguez highlighted the work of the more than 22,000 Cuban doctors that have been deployed in the country over the past five months.

“None of us imagined what we were up against when this pandemic started in Venezuela and the first friendly hand that reached out to us was that of Cuba. In these medical professionals there was not any fear or dread in their faces because they are inspired by a deep love for humanity,” Rodriguez told Venezolana de Televisión.

She added that “with much confidence and courage they have come to Venezuela” and continues with the words of Cuban President Miguel Díaz Canel Bermúdez when he said that these doctors deserve the Nobel Peace Prize to which she added: “I would say that they should also receive the Nobel Prize for love of humanity.”

Delcy Rodriguez recalled that it was a dream of Commander in Chief Fidel Castro that Cuban doctors would go to the most remote places in the world to attend to those in need. “There they are, where COVID-19 has had the extensive growth, it is about the internationalist conception of Cuban medical cooperation with the world,” she said.

On the other hand, she pointed out that Cuba is a global leader in health issues, which is why it has “a robust health system, doctors of the highest level and a pharmaceutical industry that currently carries out advanced and critical research” for the elimination of the disease.

Also present at the meeting were Venezuelan Foreign Minister Jorge Arreaza, the Minister of People’s Power for Health Carlos Alvarado and the Strategic Operational Commander of the Bolivarian National Armed Force Remigio Ceballos. On the Cuban side, the Director of the Ministry of Public Health, José Ernesto Betancourt, and the Head of the Cuban Missions in Venezuela, Julio César García, also participated.