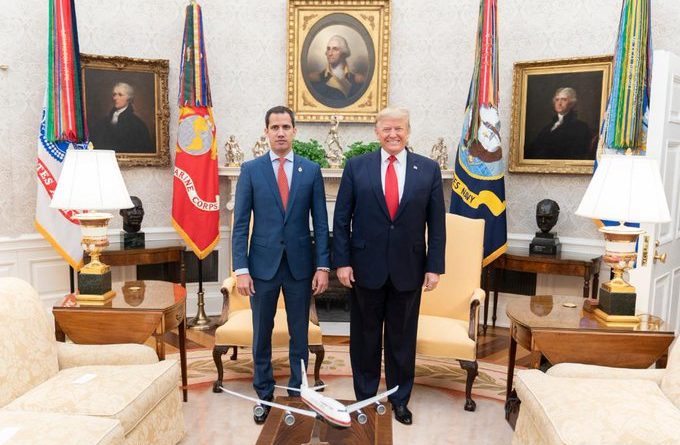 Maduro’s comments came in reaction to his US counterpart’s State of the Union address before the US Congress on Tuesday.

“Yesterday Trump talked of ‘smashing’ Venezuela. Never! Venezuela will move forward with hard work, love and perseverance,” he said in a televised address.

Trump took aim at the Venezuelan government in his State of the Union address in Washington, DC, claiming that Maduro’s “grip of tyranny will be smashed and broken.”

In a further rebuke to Maduro, the White House invited self-proclaimed “Interim President” Juan Guaido to attend the president’s speech. The opposition leader was a last minute invitee following a February 1 rally and meetings with US politicians such as Florida Republican Senator Marco Rubio in Florida over the weekend. Guaido was welcomed by both congressional Democrats and Republicans, who greeted his presence with a standing ovation.

Guaido followed his State of the Union cameo with a White House visit on Wednesday. He was received by Donald Trump before holding meetings with Vice President Mike Pence and Senators Robert Menéndez (D, Florida) and Dick Durbin (D, Illinois).

“The Venezuelan people recognize the determined leadership of Donald Trump and the invaluable support from his government,” the opposition leader wrote on Twitter.

Juan Guaido proclaimed himself “interim president” in January 2019 and was immediately backed by the US and its allies, which refused to recognize Maduro’s re-election victory in May 2018. In the twelve months since, he has unsuccessfully tried to topple the Maduro government by force.

Guaido’s leadership has been called into question in recent months following a series of scandals and in-fighting among opposition ranks. He lost the presidency of the National Assembly last month, moving to set up a parallel parliament with US backing.

Guaido embarked on an international tour in January to shore up international support, lobbying allies to impose more sanctions against Caracas. Before his White House visit, Guaido held meetings in several European capitals and in Ottawa, in addition to attending the World Economic Forum in Davos, Switzerland.

The opposition lawmaker had defied a travel ban when he left Venezuela for Colombia on January 19. Last year, he had his parliamentary immunity revoked after the Attorney General’s office opened several investigations against him. When Guaido left the country in February 2019 he later re-entered through Caracas’ airport without any issues.

For its part, Washington has supplied Guaido with hundreds of millions of dollars and imposed successive rounds of punishing sanctions in its attempts to oust the Venezuelan government.

After decreeing an oil embargo in January and targeting multiple sectors of the Venezuelan economy, the Treasury Department upgraded its sanctions regime in August to a blanket ban on all dealings with Venezuelan state companies, as well as authorizing secondary sanctions against third party actors.

Featured image: Trump hosted Guaido at the White House on Wednesday. Interesting that in a “president”-to-president meeting they forgot toe use the US and the Venezuelan flag.