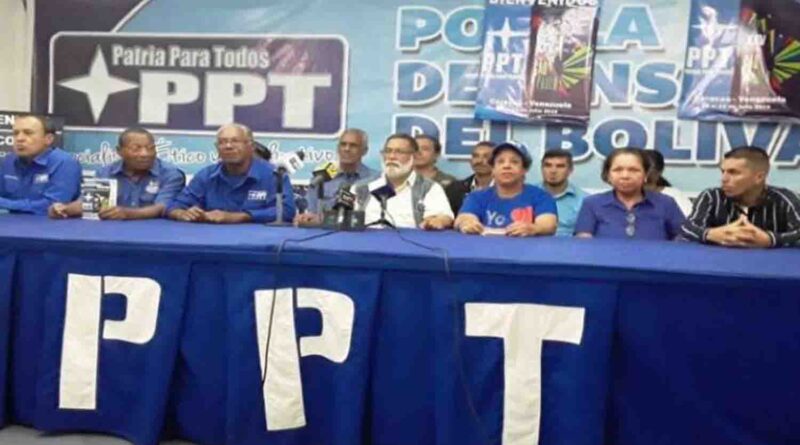 Homeland for All (PPT) and Tupamaro party members have criticised the rulings, which weaken the Popular Revolutionary Alternative for December’s parliamentary election.

Venezuela’s Supreme Court (TSJ) ordered the suspension and replacement of the national leadership of the Homeland for All (PPT) party on Friday.

The move ousted leftist leader Rafael Uzcategui, who has been PPT’s general secretary since 2010 and has been increasingly critical of recent government policy, and appointed a new ad-hoc leadership headed by Ilenia Medina. The former organisation secretary filed the lawsuit against Uzcategui and promised to “reorder PPT’s democratic life.”

Uzcategui was quick to blast the ruling as “treason,” accusing Medina of “selling out the party” in exchange for 18 well-placed candidate spots in the government-led coalition for the parliamentary elections on December 6. He went on to claim that there was no legal backing for the lawsuit and that the ruling violated the Venezuelan constitution.

For her part, Medina later confirmed that the party will indeed run in the upcoming parliamentary elections in alliance with the ruling United Socialist Party of Venezuela (PSUV), backtracking on the party’s support for the Popular Revolutionary Alternative (APR). The APR is an alliance constructed in July alongside the Communist Party (PCV) and a host of other Chavista grassroots movements which, days before the TSJ ruling, had started to submit its own list of parliamentary candidates marking a significant policy shift for the leftwing parties. The APR has vowed to oppose what it describes as an “anti-worker” government agenda, corruption, and “reformism.”

Since, Uzcategui has called on party members and voters to “offer an overwhelming response with our votes” using the PCV electoral list to run the agreed-upon APR candidates. This position has been backed by a plethora of local PPT leaders and bases who will also stage a protest outside the TSJ in Caracas this week.

Friday’s ruling came on the back of an intervention into the leftwing Tupamaro Revolutionary Movement (MRT) party last Tuesday.

As part of the decision, the Supreme Court assigned an ad-hoc national leadership led by Jose Rondon to replace current Secretary General Jose Pinto, who was arrested by authorities on July 15 on homicide charges. Pinto, who has pleaded innocent, is currently awaiting trial and claims that his detention is politically motivated.

Following the ruling, Rondon was quick to pledge his support for the government-led electoral coalition. However, MRT organisation secretary Ares Di Fazio has promised to lead party members in challenging the TSJ decision, with a number of street protests planned.

“Today the robbery of our party has been consummated,” Di Fazio said, also vowing to “confront the oligarchy, imperialism and the powerful reformist factions” behind the move. Many local MRT leaders have since pledged to back the APR in December.

Following the two interventions, the Communist Party of Venezuela issued an international statement claiming the decisions represent “an open and flagrant violation of the rights of political association.” The PCV decried the “political character” of the rulings and the attempts to impose a “fictitious, imposed and subordinated “unity” of leftwing parties” for the upcoming elections,” reaffirming the party’s commitment to the Popular Revolutionary Alternative.

The PCV likewise denounced an “act of intimidation” by the National Bolivarian Intelligence Service (SEBIN) at its Puerto Cabello party offices last week.

The United Socialist Party is yet to comment on the TSJ’s rulings or events in Puerto Cabello.

The latest episodes of judicial involvement in the internal affairs of the left-wing parties follows interventions into opposition parties Democratic Action, Justice First and Popular Will in June. In all three cases, party members filed lawsuits against the existing leaders, with the appointed ad-hoc leaderships vowing to run in the upcoming elections.

Registrations close this Wednesday, with the National Electoral Council proceeding to verify candidate qualifications before allowing parties to make changes or replacements until September 10.

Featured image: PPT General Secretary Rafael Uzcategui (center) has been ousted as party leader and will be replaced by Ilenia Medina (second from the right) following a Supreme Court ruling. (La Verdad)