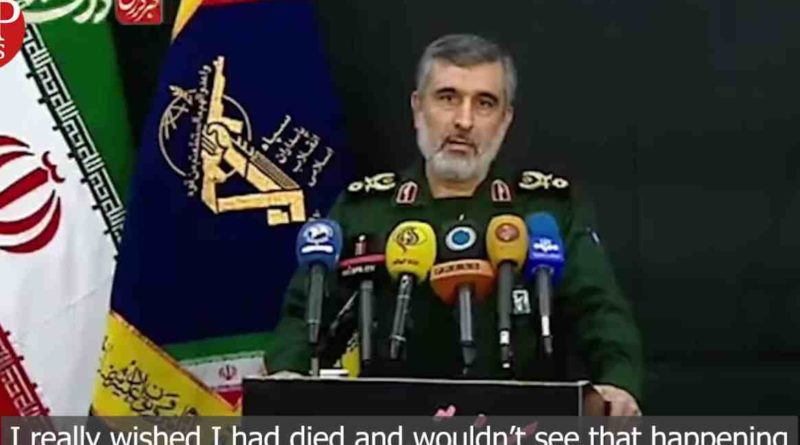 By Moon of Alabama
After the shoot down of the Ukrainian flight PS752 the big question within Iran and within its military and political circles is what went wrong.

An analysis of the circumstances under which the incident took place unfortunately shows that nothing went wrong. The strategic and tactical decisions that were made were all rational and made sense. But unfortunately shit happens even when everything else works as it is supposed to work.

The Iran Front Page has now published a full English language transcript of the press conference by IRGC Aerospace commander Brigadier General Amir-Ali Hajizadeh. It also provides a video with English subtitles of the talk. The narration he gives is highly plausible and has no contradictions within it.

A detailed reading of his talk also clears up some misconceptions in the earlier reporting and comments:

Regarding the details of the incident, I should say; well, you know the region’s conditions remained tense and the risk of conflict was high for over a week. It was really unprecedented compared to what we saw in previous years, even since the 1979 Revolution. The risk of conflict was very high; both the Americans and the Iranian Armed Forces were on highest alert. The Americans had also threatened to hit 52 sites in Iran.

This is a main point one must keep in mind. There really was a threat from the U.S. and everyone thought that war would break out within the next minutes or hours. Decisions made under such stress are more prone to be wrong:

RELATED CONTENT: Iran Will Bring to Justice All Parties Involved in the Ukrainian Airplane Disaster

What we know from our investigations and from what our friends explained is that, well, at that night, for example from [Tuesday] evening, the level of preparedness was at wartime conditions; the highest alert level communicated by the integrated air defence to all systems. Under such circumstances, a number of air defence systems was added to Tehran’s air defence ring. The first system – which was behind the incident – was deployed in Bidganeh in western Tehran.

An integrated air defense system provides a full picture of the air situation to all connected units. Fixed radars, defense missile units and command and control centers are connected by secure landlines, not by radio.

But the mobile Tor M1 system responsible for shooting down the Ukrainian airliner was added as a stand alone system. It is an relatively old system. Its operators only had a voice radio connection to other parts of the network. If they had a data connection at all it was also via radio and with very little throughput. The system did not have the full picture of the air situation. Its own radar has a maximum detection range of 25 kilometer (16 miles). In most practical situations it will be a lot less than that. Bidganeh, where the system was deployed, is a strategic missile production and test facility some 30 kilometer away from Tehran airport. The Tor operator did not know that a civil airplane had just taken off:

At several stages, the Alert Level 3, which is the highest level, is communicated and emphasized to the entire network. So all air defence systems were at highest alert level. For several times, these systems including the one involved in the incident were notified by the integrated network that cruise missiles have been fired at the country. For a couple of times, they receive reports that ‘the cruise missiles are coming, be prepared’.

This is the normal ‘fog of war’ situation in which misinformation, or electronic interference, causes false alarms and where confusion sets in.

So you see the systems were at the highest alert level, where you should just press a button. They had been told cruise missiles were coming, and the air defence unit engaged in this incident and fired a missile. Now we have arranged an interview with this operator, which will be released soon as part of the plan to publicize the issue. He says in this interview that “we requested for several times that the country’s airspace be cleared of [civilian] flights.’ At the Alert Level 3, this is normal; such requests are made; well our dear brothers didn’t follow up the issue for certain considerations. So the planes fly despite the wartime situation.

This the major political issue, not a military one.

Iran’s strategic intent after the U.S. assassination of its national hero Qassem Soleimani was to project defiance to the U.S. Its revenge missile barrage on the U.S. base in Iraq was fired despite harsh U.S. warnings and threats of war against Iran.

The pin point hits on the selected targets, mostly maintenance shacks, was a warning that demonstrated Iran’s capabilities. I think it was necessary and worth the risk.

The political level decided that by leaving the airspace open and by showing normalcy it would further its strategic objective. Closing the airspace would have allowed the U.S. to claim that Iran is fearing its response and that it had shown weakness. The decision to not close the airspace was, I believe, strategically correct. But it had tactical costs which turned out to be high.

The Tor M1 was developed in 1991. The radar signals it generates are shown on an analog tube-screen. The radar’s ‘hits’ on the screen are difficult to discriminate. At best one has speed, distance and direction of the target and must draw conclusion from that. The Boeing jet broadcast the usual civil ADS-B signal but one has to expect that a U.S. cruise missile can and would do the same. The speed of the still climbing Boeing 737 was about 250 knots or 460 kilometers per hour (286 mi/h). That is within the range of the speed of a typical cruise missile. The plane needed a bit less than 8 seconds to fly one kilometer. That left little time for the Tor operator to decide and react.

Well at such a situation, he was obliged to contact, get approval. This is where this operator makes the mistake; but at that moment, his communication system was apparently disrupted – whether because of jamming systems or the high traffic. For that reason, he fails to contact [his commanders]. He had 10 seconds to decide; he could hit or not hit [the target]. Under such circumstances, he decides to make that bad decision; he engages, the missile is fired, and the plane is hit at this place. Then it returns through this track, and here’s the point where it hits the ground.

Radio communication can be unreliable. The people at the other side of the operators call may have been talking to someone else or could  not react immediately. Air defense personal is trained to always presume electronic interference by enemy forces. The U.S. has publicly bragged about its cyber-attacks on IRGC systems. U.S. air attacks typically come behind a wave of electronic countermeasures.

Under these circumstances – highest possible alarm level, current warnings of hostile cruise missiles, unknown target flying towards a presumably military objective, lack of communication, little decision time – the operator of the Tor system did what he was trained to do.

As a former military officer I can not see any fault in what the man did. That is why I find this statement by Iran’s President Rouhani to be wrong:

In a separate statement, Rouhani called the missile launch an “unforgivable mistake,” and he said officials must “address the weaknesses of the nation’s defense systems to make sure such a disaster is never repeated.”

Iran’s strategic intent is to withstand U.S. pressure and to show defiance. Closing the airspace would have contradicted that objective. The shooting down of flight PS752 happened during a tactical engagement by a small mobile unit which did what it was supposed to do. Communication fuck-ups happen all the time during war like situations. They often cause casualties but are unavoidable.

The general in his press conference claimed that his organization is guilty:

Our dear brothers at the Aviation Organization categorically rejected the possibility of a missile hitting the plane; they acted based on what they knew. I must say they were not guilty and have nothing to do with this. All the blame is on us; they’re innocent. The plane was also on its track, it made no mistake. It did the right thing, as did the Aviation Organization. Everyone did the right thing. Only one of our forces made a mistake. Since he is under our command, we are responsible for that. We must be accountable.

It is the right thing to say public relation wise. But the incident itself is not a military error or mistake.

What one can and should criticize is the slow reaction of the Iranian military command after the incident happened. It launched an internal investigation and told everyone to be silent about it. It took the generals three days to look for an excuse that was impossible to find because everything that had happened did happen for rational reasons. The air defense systems have to be dispersed to make them less easy to attack. Communication failures are to be expected during a war. The soldiers are trained to act autonomously when comm-failures happen. They did what they had to do.

It is sad that this incident happened and that 176 lost their life. But if one wants to find a person guilty for it one must look for the person who caused the whole situation. That person is not the lowly sergeant who pressed the button. That person is U.S. President Donald Trump.