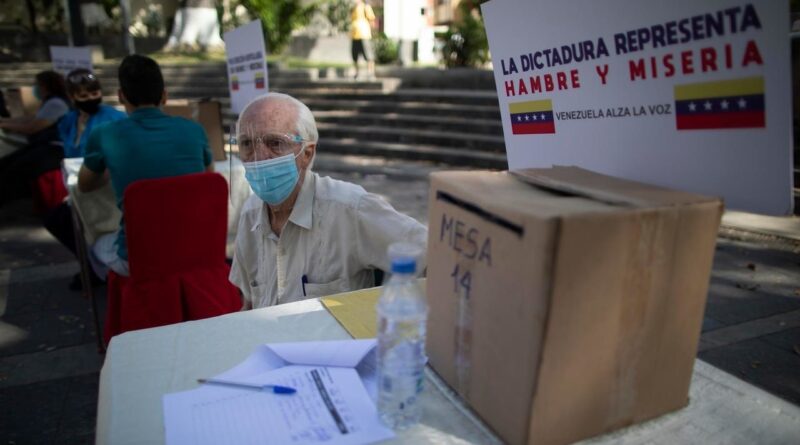 With the consultation called by Juan Guaidó last weekend, the political agenda for this year has concluded in Venezuela, and will be reactivated on January 5 next year with the swearing-in of the new board of directors of the National Assembly (AN), as scheduled constitutionally.

However, Guaidó and some of the opposition deputies who had elected him as president of that legislative body have declared their “administrative continuity” beyond the constitutionally mandated period. And this is where the fundamental objective sought by the consultation resides: to legitimize its perpetuation—to which no definite time period has been assigned, once the term (of the previous National Assembly) ends.

The consultation, which was in “response” to the parliamentary elections of December 6, has been a procedure that has generated many doubts even within the opposition, both in relation to the legality of the process and the reliability of the data provided.

Doubts about legality and reliability

On the one hand, at the moment when Guaidó is the main spokesperson for the consultation process, he is concentrating all the supposed powers of his “interim government” (the executive, the legislative and now also the electoral body), although in practice he does not exercise any of them. And all this when one of his main arguments for the delegitimization of the official electoral process is the “lack of autonomy” of the National Electoral Council (CNE).

But if the consultation’s own data could be confirmed, which affirm that 3.2 million people participated physically, we would be in the presence of a meager result that puts the rate of abstention from the consultation at more than 85%, much higher than the abstention rate in the official elections, which was 70%.

RELATED CONTENT: “So Much Fuss to get Fewer Votes than PSUV?” Ochoa Antich on Guaido’s “Popular Consultation”

Then there would be the 845,000 participants who are supposed to have voted from abroad (all this according to Guaidó’s figures only), which expands the electoral roll of the consultation because this segment of the population could not participate in the parliamentary elections, since the right to vote from abroad is legally limited to the presidential elections.

The own data of the organizing team of the consultation leaves the opposition as a minority and breaks the link that could have been made of the high abstention of the parliamentary elections as being in response to an opposition call.

On the other hand, the 2.4 million citizens who supposedly participated in a virtual way could not be compared with the results of the National Assembly, since the system (of the CNE) does not contemplate this type of mechanism, and less with an extension of time of almost one week.

In addition, these are results that cannot be corroborated and that did not have international observers, a curious fact if we take into account the number of Guaidó’s allies in powerful governments.

Thus, the own data of the organizing team of the consultation leaves the opposition as a minority and breaks the link that could have been made of the high abstention of the parliamentary elections as being in response to an opposition call (for boycott).

According to Eugenio Martínez, a well-known opposition electoral analyst, “there is no way to explain the numbers of participation in the consultation.” More than a criticism, it affirms that it is not a proper electoral event.

Even those international media organizations that had raised broad expectations about the call of the consultation ended up offering their criticism, such as France 24: “And the results announced by the Committee cannot be verified. In addition to the absence of external observers, there were no controls in the participation process to prevent voters from depositing their answers in more than one voting place, or that those who had already voted ussing the apps did not also do so with physical ballots.”

For its part, the news agency EFE concluded that the event “raised a sea of doubts due to figures not verified by observers, without details of the result, and they open a path still without destination.”

With this level of legal and technical precariousness of the consultation, it is difficult to accuse the official electoral system of fraud, as Guaidó and his followers have done.

Moreover, the weakness is also political, as the rest of the opposition leadership was not very enthusiastic in their support . Radical sectors, such as that of María Corina Machado, rejected the mobilization and ended up turning away from Guaidó, whom they had previously recognized.

If the objective of the consultation was rather to retake the streets and to reactivate the demonstrations against the government, that did not succeed either, since there were no mobilizations, protests, and not even full voting centers.

Henrique Capriles, politically more moderate, also ruled out participating in the event and considers Guaidó’s project to be exhausted.

In this situation the “interim government” is being supported basically by the sector allied to Leopoldo López, who is operating between Spain and Colombia.

If the objective of the consultation was rather to retake the streets and to reactivate the demonstrations against the government, that did not succeed either, since there were no demonstrations or protests or even voting centers full of people.

Previously, the opposition had tried to hold consultations of this kind in 2017 without any political impact worth recalling. It is very likely that this time also it will be the same.

Final image of Venezuelan politics in 2020

The end of the year image in the Venezuelan political sphere can be summarized as follows:

With the parliamentary elections of December 6, Chavismo gained the only important political space that it did not control, which is nothing less than the legislative branch. The opposition could not take off, and the radical sector, after the consultation, sits down to wait for the instructions of the new US president, Joe Biden.

For now, the opposition does not have a clear strategy, and it is certain that the consultation cannot have any foreseeable scope, although they are already calling for a mobilization for January 5 as a protest against the swearing-in of the new National Assembly.

Featured image: Even anti-Chavista leaders agree that the consultation had a low turnout. Photo by AP – Ariana Cubillos.