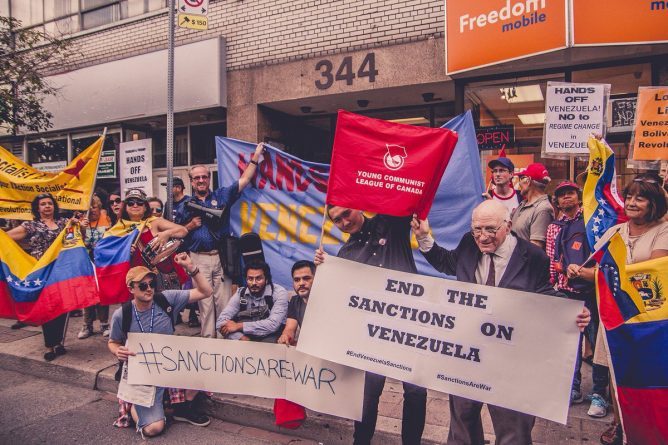 CEPR’s Alexander Campbell looks at US sanctions against Venezuela and how the media ignore their effects.

Last week, the US formally adopted sanctions on Venezuelan national oil company PDVSA, as well as on CITGO, its US-based distribution arm, as part of its press for regime change in Caracas. National Security Advisor John Bolton estimated the actions would affect some $7 billion in assets and would block $11 billion in revenue to the Venezuelan government over the next year. The State Department was quick to add, “These new sanctions do not target the innocent people of Venezuela…”

But of course they do. The Wall Street Journal reported:

The sanctions could create deeper gasoline shortages in Venezuela. The country’s refineries are already operating at a fraction of their capacity, crippled by a lack of spare parts and crude. Venezuela only produced a third of the 190,000 barrels of gasoline it consumed a day as of November, according to Ivan Freites, a leader of the country’s oil union.

But just across the street, a group of senior citizens waiting in line to collect their pensions worried that the Trump administration’s actions would further bankrupt their country and deepen the humanitarian crisis that has left so many starving, sick and without basic services.

“The United States has no business meddling in this,” said Aura Ramos, 59, a retiree who can barely afford blood pressure medicine. “It’s the regular people who will be affected.”

However, we are deeply concerned at the potential for the recently announced U.S. sanctions to intensify the severe hardships and suffering that millions of Venezuelans are enduring. Venezuelans are already facing widespread scarcities of essential medicines and basic goods. Venezuela’s oil exports represent the main source of hard currency used to pay for imports. Without this revenue, it is clear that the importation of food and medicine could be put at risk. In turn, this will further accelerate a migration and refugee crisis that has strained neighboring countries and put many of the over 3 million Venezuelan migrants and refugees at risk.

It appears as though there is increasing acceptance of the basic fact that the US sanctions on Venezuela will have a negative impact on the people of Venezuela, but all this analysis misses two important points. First, the Trump administration had already imposed broad economic sanctions in 2017, though apparently both The Wall Street Journal and New York Times were unaware of this development.

From the same WSJ article:

…this week’s sanctions mark the first targeting of Venezuela’s lifeblood industry, which accounts for nearly all of the country’s hard currency income. Until now, U.S. sanctions were largely limited to individuals in Venezuela’s regime.

Another example from a NYT article a few days earlier:

The oil sanctions amount to the first punitive action taken by the United States against Mr. Maduro since the power struggle in Caracas erupted last week, and it is intended to starve the government of Mr. Maduro of cash and foreign currency. Oil production in Venezuela has already plummeted because of mismanagement and poor policies, and the country’s economy is in shambles.

These examples are certainly not alone in their misunderstanding of the sanctions ― and their impact on the oil industry. But it’s not terribly difficult to find information on the impact of the 2017 sanctions. Venezuelan economist Francisco Rodríguez provided a useful analysis last year explaining just this ― and it is even in English.

Rodríguez’s basic story: the oil industry is critical to the Venezuelan government; underinvestment and the rapid decline in oil prices caused a significant drop in revenue; then, as oil prices began increasing, Trump imposed sanctions making any international financial transaction extremely difficult and potentially “toxic.” Rodríguez explains, using this graph of oil production in Venezuela and Colombia, how Venezuelan and Colombian oil production both declined at the same rate, until the Trump financial embargo was implemented in August 2017. Then, Venezuela’s oil production collapsed: It is striking that the second change in trend in Venezuela’s production numbers occurs at the time at which the United States decided to impose financial sanctions on Venezuela. Executive Order 13.808, issued on August 25 of 2017, barred U.S. persons from providing new financing to the Venezuelan government or PDVSA. Although the order carved out allowances for commercial credit of less than 90 days, it stopped the country from issuing new debt or selling previously issued debt currently in its possession.

The Executive Order is part of a broader process of what one could term the “toxification” of financial dealings with Venezuela. During 2017, it became increasingly clear that institutions who decided to enter into financial arrangements with Venezuela would have to be willing to pay high reputational and regulatory costs. This was partly the result of a strategic decision by the Venezuelan opposition, in itself a response to the growing authoritarianism of the Maduro government.

It’s not just the the media’s apparent amnesia with regard to those 2017 sanctions and their impact on the oil industry that is the problem here. In fact, the impact of those sanctions was even larger. As my colleague, Mark Weisbrot has previously explained, and as Rodríguez notes in the same article linked above, the sanctions made it virtually impossible for the Venezuela government to take the measures necessary to eliminate hyperinflation or recover from a deep depression. Such measures would include debt restructuring, and creating a new exchange rate system (Exchange Rate Bases Stabilization), in which the currency would normally be pegged to the dollar.

But it actually gets worse. When the US first announced its recognition of Juan Guaidó as president of Venezuela on January 23, the decision was met largely with applause within the foreign policy establishment. It seemed like nobody bothered to think about what, practically and economically, the decision would mean. Since Trump’s election, and his increasingly threatening rhetoric in relation to Venezuela, there has been wide agreement that a full-scale oil embargo would be terrible, both for Venezuela and the US. Yet somehow hardly anyone realized that by recognizing Guaidó, the US was de facto putting an oil embargo in place. Once again we turn to Rodríguez who, for what it’s worth, has been publicly supportive of the decision to recognize Guaidó and wrote the following on January 28,[1] a day before the most recently announced sanctions:

By giving it the legal authority to invoice Venezuelan oil, the decision to recognize the Guaidó administration, therefore, would have the same implications for bilateral trade of an oil embargo. Applied by the countries that provide for nearly three-fourths of Venezuela’s imports, the decisions can be expected to have a significant effect on the country’s capacity both to produce oil and import goods. As a result, we expect Venezuela’s oil production to decline by 640tbd to 508tbd in 2019 (a fall of 55.7%), as opposed to our prior forecast of 1,070tbd. Exports will fall to USD 13.5bn (USD 12.3bn from oil), nearly half our previous estimate of USD 23.8bn. Imports of goods will decline to USD 7.0bn, a 40.3% decline (we expect the entrance of some humanitarian aid as well as the default on payments of all debt to cushion the fall). Venezuela’s economy is highly import dependent, as illustrated by the strong empirical correlation between import and GDP growth. As a result of the additional import crunch, we expect Venezuela’s economy to contract by 26.4%, as opposed to our previous forecast of 11.7%.

The impact is clear. The decision to formally recognize Guaidó will have a massive economic impact on the people of Venezuela ― irrespective of sanctions, oil embargos or whatever else is announced. The Trump administration succeeded in de facto implementing an oil embargo, without taking any of the heat they would have if it were done explicitly. And then this week, the Trump administration announced broader trade sanctions that appeared to make explicit by the recognition of a parallel government, with some specific carve outs for American oil companies already in Venezuela, like Chevron and Halliburton.

Of course, there are plenty of people who will argue that this pain and suffering is worth it in order to force Maduro from power. That’s their right, but the media should force them to make that argument openly, and honestly confront the pain and suffering these policies will inflict.

Finally, if asking for the media to get the sanctions story right is too much, maybe they can give some coverage to the fact that National Security Advisor John Bolton went on national TV and openly said the following:

A decimated oil industry in the nation with the largest proven oil reserves in the world would appear to serve some alternative interests beyond “democracy” and “human rights.”