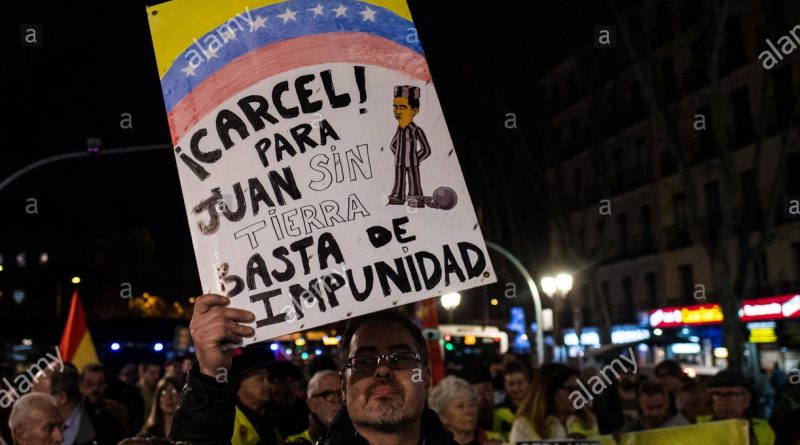 The political organizer, retired military leader and teacher William Izarra believes that the Bolivarian Revolution has tools to continue fighting the world powers that oppose it because it has the leadership, organization and allies for that task.

However, he warned that, according to his perception, the majority of the revolutionary people disagree with the flexible way in which the anti-Venezuelan and pro-American opposition has been treated, starting with the self-proclaimed Juan Guaidó.

Izarra made these considerations in an interview with La IguanaTV

– Do we have the leadership and organization necessary to overcome the blockade and unilateral coercive measures of the United States?

-To date, Venezuela has a leadership (a leader and its alliance factors for leadership and decision-making) that has had the ability to defeat imperialism represented by the United States. Hugo Chávez delegated the act of leading the Revolution, the Republic and the people to President Nicolás Maduro, and he, receiving the charge from Chavez, has managed to consolidate a leadership in a very critical and difficult scenario of unconventional, hybrid and multifactorial warfare, using their own methods, intuition and knowledge. There is a leader who has been able to fight against the power of the world that is adverse to the Bolivarian Revolution.

Regarding the organization: the one to be had, as it exists and that can be verified in concrete terms, has responded to the leader and his policies. It is possible that, finding other factors with broad visions and perspectives of goals with more precision about Bolivarian socialism not incorporated into the direction of society, shorter paths could have been taken to reach today’s reality. Despite of everything that is not there, that does not exist in the reality of the scene. What we have is what was achieved with the structure available to the leader.

If until now the Empire has been defeated and the adversity represented by the destabilizing, anti-Venezuelan and pro-American opposition has been countered, I believe that the leader with his allies of the moment and the accumulated experience of war, resistance and unlimited adversity will continue to defeat the coercive measures that the globalized world of wild capitalism will continue to implant against the new way of life that the Bolivarian Revolution wishes to build.

-The people seems to be in a moment of effervescence in which it demands more drastic actions against the opponents that appear as allies of the external enemy. Do you agree with that perception? What do you think the government and the other powers should do in that regard?

The revolutionary people support and back the government and its president; nevertheless, it cries out for justice that has not been applied to the leaders of the conspiracy. I am sure that the revolutionary people understand what strategic waiting and calm in tactical operations means, due to the threats of invasion that the Southern Command wants and that Donald Trump has as an option. However, the morale of the revolutionary fighter appears on the political scene of the revolution. As time goes by, and the [coup] leaders are left with impunity to do what their irrationality demands them to do in a discretionary manner, in the same measure the demand of the revolutionary people is to maintain a high level of their morale nourished by the exercise of justice. Morale generates momentum of struggle and satisfactory states of disposition to accept the decisions of the leader. But, with low morale as a result of the tolerance of impunity of the adversary, the revolutionary reaches levels of disappointment and frustration that might limit this momentum and their beliefs in the decisions made by the leader.

If these variables are taken to a coordinate graph and on the one hand we prepare the “strategic wait (do not touch the self-proclaimed by the threat of invasion)” curve and on the other, we create the “expectations for the application of justice (deprived of liberty for the self-proclaimed) ”, it will be seen how both curves approach until touching and crossing. This crossing of curves makes the critical point (CP) appear, which is generated as a result of the decrease in the values that have been given to the strategic wait and the rise in the values of the index that measures the need for justice. When the CP appears, there can be several events on the stage, among them, the most significant is the loss of confidence in the leader of the government and revolutionary process.

– Was the route of the dialogue with the opposition canceled or can it still resume?

-The dialogue will always be present in the strategy of the leader of the revolutionary process, to maintain the stability of the Republic and integrity of the Homeland. President Nicolás Maduro has managed to press the confrontational environment that occurs in the political arena. I assume that he is convinced that this stability alternative is never abandoned. Acute and very critical moments may appear with the opposition, but still, I am sure, President Maduro will not rule out dialogue.

There are several factors that create an environment conducive to dialogue: the disposition of the government of President Nicolás Maduro, the limitations and internal confrontations of the opposition (radicals, moderates and weather vanes) and international demands of good will (neutral and allied countries). Even with the irrationality of those who demand the invasion, the dialogue is not disposable. However, this latent and viable option will not prevent justice from materializing to deprive the conspiracy leaders of their liberty, who demand the invasion, starting with the self-proclaimed and the fledged spokesmen of the country and installed in countries with adverse governments to the Bolivarian Revolution.