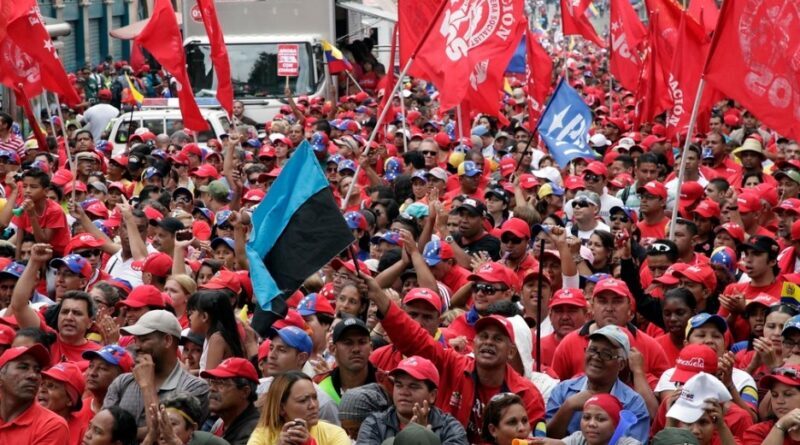 Common Dreams, a liberal-left website, reposted an article by David Smilde of the Washington Office on Latin America (WOLA): Joe Biden Should Not Try to Out-Hawk Trump on Venezuela. It starts off well with the subtitle: “The first task for a Biden administration would be to take military intervention off the table.” The US has no business invading Venezuela. But Smilde’s approach is that the military option is ill-advised because there are more efficient ways of removing the Maduro government.

Smilde criticizes the US unilateral sanctions as “doing more harm than good,” something of an understatement, and later says “sanctions pinch the Maduro government, they bludgeon the Venezuelan people.” This rings of hypocrisy, as WOLA has strongly defended these sanctions. In fact, Common Dreams has twice published open letters (here and here) criticizing Smilde and WOLA for not opposing Washington’s regime change effort in Venezuela.

The purpose of Smilde’s article is to advise Biden that Trump’s strategy against Venezuela is counterproductive, that the US needs a better regime change policy. Smilde seems to forget this economic warfare against Venezuela originated when Biden was Vice President, and that Biden now attacks Trump for being soft on Venezuela.

1. “The Maduro government has presided over a governance disaster that has forced over 5 million Venezuelans to leave.” Smilde does not connect the increased “bludgeoning” of the Venezuelan people with increased emigration due to the economic hardship. The 2018 UN Report by Alfred de Zayas stated, “While the Bolivarian Republic of Venezuela is undergoing a severe economic crisis, the Government is not standing idle; it is seeking international assistance to overcome the challenges, diversifying the economy and seeking debt restructuring. Sanctions only aggravate the situation by hindering the imports necessary to produce generic medicines and seeds to increase agricultural production. Sanctions have also led to emigration.”

Rather than point out the economic warfare of US sanctions helped cause emigration, Smilde ambiguously states Maduro presided over a governance disaster that has forced them to leave. Maduro forced no one to leave. In fact, the government welcomes those who return, as they are now, due to the even worse conditions they faced in the countries they emigrated to.

2. “Maduro has not only undermined democratic institutions, he has repressed protestors, and jailed, tortured and disappeared opponents in what could qualify as ‘crimes against humanity.’ As such, Venezuela might seem ripe for an intervention justified in terms of the ‘responsibility to protect.”

The link in Smilde’s article takes us to the New York Times, which refers to a report by the NGO Foro Penal. Its executive director, Gabriel Gallo, claims “Venezuela has the greatest quantity of political prisoners in the Americas. Including more than Cuba.” We may question the criteria used to determine Venezuela has more political prisoners than Colombia, Honduras, Brazil, Bolivia or Mexico.

Who is Gabriel Gallo and Foro Penal? Gallo was a leader of the rightwing Venezuelan political party Voluntad Popular (VP), the most violent and anti-democratic party in the anti-Chavista bloc. The most prominent leaders of VP include Leopoldo Lopez, Juan Guaido, the person the US appointed head of Venezuela, Freddy Guevara, and Carlos Vecchio. Leopoldo López launched the attempted coup against President Maduro in 2014. VP activists formed the shock troops of that year’s “guarimbas” protests that left 43 Venezuelans dead, 800 hurt and millions of dollars in property damage. Dozens more were murdered in a new wave of VP-backed violence in 2017. Leopoldo Lopez and Juan Guaido were leaders of the April 2019 failed military coup attempt and contracted this year’s mercenary hit squad invasion.

In May 2014 Diosdado Cabello, head of the Venezuelan National Assembly, revealed that Foro Penal, along with others, had received funds from the United States and Panama to instigate violent actions in the country. He accused 14 people, including the director of Foro Penal, Alfredo Romero, of participating in a destabilization plan against the Venezuelan government.

In 2017 Human Rights Watch organized a letter to the Office of the High Commissioner for Human Rights condemning Venezuela. But as Venezuelanalysis noted, “Among the signatories are several usual suspects such as Provea or Foro Penal, whose president Alfredo Romero was a recent speaker in a [Freedom House organized] ‘US Democracy Support’ forum….Human Rights Watch has a long and documented history of bias and outright lies in their reports on Venezuela, which is no surprise given their blatant revolving door with the US government.”

Venezuelanalysis reported in 2019, “Guaidó’s representative in the Czech Republic is also the international coordinator for human rights NGO Foro Penal (Penal Forum), which the US State Department has decorated with numerous awards for its work in Venezuela. According to WikiLeaks cables from 2006, Foro Penal has been bankrolled by Freedom House and the Pan-American Development Foundation (PADF) through a USAID-supported project.”

Thus, WOLA and the New York Times rely for information on Venezuelan human rights from agents of Venezuela’s most violent right wing political party, allied with US government NGOs, all committed to overthrowing the Venezuelan government.

Human rights abuses have been committed by state agents, but a fair minded assessment would include the fact that the Maduro government has taken considerable corrective action. On June 15, Venezuelan Attorney General Tarek William Saab reported on human rights abuse charges against its security force members. A total of 540 had been charged since August 5, 2017, with 426 actually imprisoned. Charges against them include homicide, torture, cruel, inhuman or degrading treatment, and illegitimate deprivation of liberty. Saab called for improved training of police in protection of human rights.

This report by Saab came out ten days before Smilde’s Common Dreams article, yet Smilde made no mention of it.

3. “Venezuelans would love to solve this crisis on their own at the voting booth; but they can’t because their country’s electoral institutions have been undermined by the Maduro government.”

In reality, the primary threat to Venezuelan democracy comes from US-backed coup attempts, going on for 18 years, and which began back in 2002. The US has even threatened sanctions against opposition leaders for simply choosing to run in presidential elections against Nicolas Maduro, rather than boycotting elections and advocating actions to overthrow the elected government. The US went further when it gave the green light to Juan Guaido to appoint himself president of Venezuela in January 2019, which the US and its European Union allies then validated.

The US was the only country in the world not to recognize the legitimacy of Maduro’s 2013 election. This reflected Obama’s strategy of regime change, which could not be achieved by democratic electoral means. Instead, the US sought to bring down the new government by supporting violent protests.

Stories of Venezuelan electoral fraud became more widespread, even among defenders of Venezuela, with their disputes over the July 30, 2017 vote for members of the National Constituent Assembly. The Venezuelan opposition has always charged fraud over any election result, unless they won.

The US then escalated its campaign of accusing Venezuela of electoral fraud during its presidential elections of May 20, 2018. However, the international Council of Electoral Experts of Latin America (CEELA) observed both the 2017 and 2018 elections. It issued a report on the 2017 vote, not questioning that over 8 million did vote.

“CEELA Mission is of the opinion that the process was successfully carried out and that the will of the citizens, freely expressed in ballot boxes, was respected. The electoral process for the Presidential and State Legislative Council Elections 2018 complied with all international standards….The CEELA Electoral Accompaniment Mission upholds that the electoral process has consolidated and reaffirmed strengthening of the electoral institutionalism that supports the democratic system.”

Indeed, it is remarkable that the Venezuelan government has maintained its democratic institutions as well as it has under this constant US-European Union campaign to overthrow it.

As Alexander Rubenstein writes, “WOLA provides information and analysis for the White House and Congress and receives wide circulation in the media as an authority on Latin America, characteristics more indicative of a foreign policy think tank than a human rights NGO.” Its largest funders include Royal Norwegian Ministry of Foreign Affairs, Swiss Federal Department of Foreign Affairs, Swiss Agency for Development and Cooperation, the Ford Foundation, the MacArthur Foundation, and George Soros’ Open Society Foundations.

The Open Letter to WOLA that Noam Chomsky and others signed notes that WOLA opposed the Vatican’s, and then Mexico and Uruguay’s proposals for mediation between the Maduro government and the opposition.

Lucas Koerner recently wrote WOLA: Media’s ‘Left’ Source for Pro-Coup Propaganda in Venezuela. In spite of what Smilde writes in Common Dreams against sanctions, Koerner notes that WOLA has defended Trump’s sanctions. WOLA even found four “virtues” in the August 2017 sanctions responsible for an estimated 40,000 deaths over the following year.

In short, Smilde’s beef with both Biden and Trump is that they could do a better job of regime change in Venezuela. WOLA is not a human rights organization, but serves to rationalize, not criticize US regime change attempts. Why Common Dreams provides a sounding board for this is a good question.