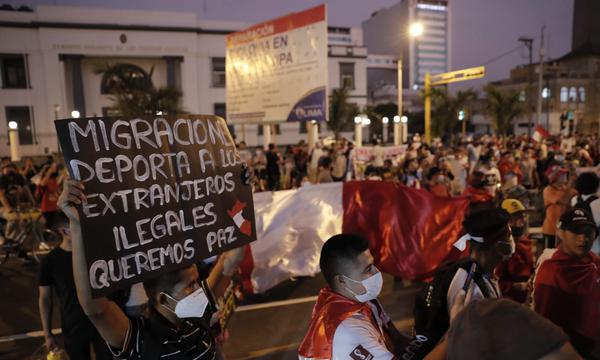 This Saturday, February 20, dozens of individuals violently attacked the headquarters of the Venezuelan embassy in Lima, Peru. They were armed with stones and blunt objects and claimed that they were protesting the alleged murder of a Peruvian in Colombia at the hands of Venezuelans.

The violent protesters smashed glass windows and wrecked the diplomatic headquarters while shouting xenophobic slogans against Venezuelan migrants. The incident did not leave any injuries either to the embassy staff or to the protesters.

According to reports by news agency Prensa Latina, the Venezuelan diplomatic headquarters had only three police officers on duty at the moment. They arrived after the attack to lessen damage and to control the situation.

Before the attack on the Venezuelan embassy, ​​the protesters tried to reach the Peruvian presidential palace to demand that President Francisco Sagasti close the borders to Venezuelans.

“This is bullshit, take your people, this is bullshit!” Shouted one of the mobsters who recorded himself pointing to Venezuela’s coat of arms that is on the fence surrounding the building of the diplomatic mission, against which they threw stones and bottles, in addition to committing vandalism.

According to information released by international media, these protesters not only shouted xenophobic insults against Venezuelans, but also set fire to informational posters at the headquarters.

Although nobody was injured or wounded, the protesters acted freely, without almost any police authority to try to stop the vandalism, until after it had ended and the mob had dispersed.

Peruvian authorities initially encouraged migration from Venezuela as part of the regime change strategy against Caracas led by Trump’s government, but within months after the arrival of the first Venezuelan migrants, Peruvian authorities and law enforcement launched an anti-Venezuelan xenophobic campaign that reached a climax when former president Martín Vizcarra personally “supervised” weekly planes deporting Venezuelans and it was widely covered by Peruvian media as a big achievement.

“On the other hand,” said a political analyst to Orinoco Tribune, “Venezuela has received hundreds of thousands of Peruvians over the years, and most of them still live in Venezuela. As it happens in mass migrations, some bad apples always embed themselves in migrant flows. In fact, it has happened to Venezuela, with Peruvian criminals arriving among migrants from that country, but that has never made Venezuelan authorities blame Peruvians for the economic, political, or law and order problems in Venezuela. It is a shame to see this kind of behavior fomented by right-wing governments being replicated in several Latin American countries like in Peru, Ecuador, Panama, Colombia and Dominican Republic, among others.”

After the violent attacks, Venezuelan Minister for Foreign Affairs, Jorge Arreaza, demanded that Peruvian authorities comply with articles 22 and 25 of the Vienna Convention on diplomatic relations.

He also demanded that the Peruvian government should adequately protect the Venezuelan Diplomatic and Consular Mission in Lima. “We demand respect for Venezuelan migrants in Peru, just as the hundreds of thousands of Peruvians living in Venezuela are respected,” he reiterated on his Twitter account.

Article 22 of the Vienna Convention on Diplomatic Relations states the following:

1. The premises of the mission are inviolable. The agents of the receiving State may not enter them without the consent of the head of the mission.

2. The receiving State has special obligation to adopt all appropriate measures to protect the mission premises against any intrusion or damage and avoid disturbing the tranquility of the mission or threatening its dignity.

3. The premises of the mission, its movable assets and other property located therein, as well as the means of transport of the mission, may not be the subject of any search, requisition, embargo or enforcement measure.

Article 45 of the Convention which makes the receiving State responsible for the following:

Featured image: Peruvians have been inoculated with xenophobia against Venezuelans by the government of Peru. Former president Vizcarra personally “supervised” weekly deportation of Venezuelans. Photo Peru 21.