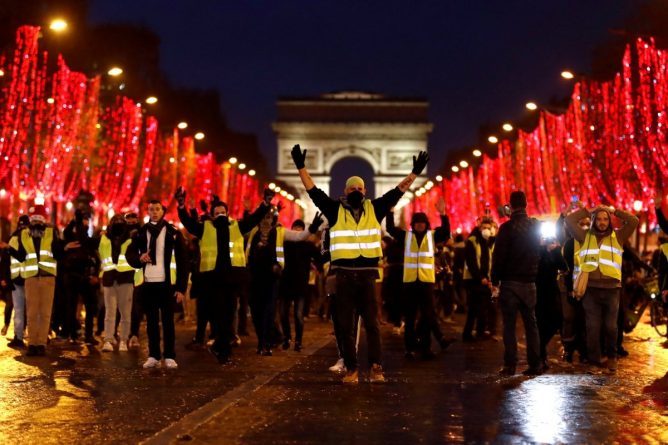 The popular movement known as yellow vests protest this Saturday in France for the seventh consecutive week, in demand for better working conditions.

Hundreds of protesters are gathered in the Champs Elysees in Paris and at least a thousand in the center of Marseille, southeast of France.

The yellow vests began demonstrations in November to express their rejection of the increase in fuel taxes announced by President Emmanuel Macron.

The French president suspended the increases, but the yellow vests also demand the recovery of purchasing power and improvements in public services in rural areas.

In addition, demand the raise of the minimum wage to 1,300 euros per month (currently is 1,150 euros), as well as the prohibition of layoffs and the Budget cut policy of the French Government.

Macron added 100 euros a month to the minimum wage, at no cost to the employer, in order to mitigate the protests of the yellow vests, but the measure did not have the expected effect.

Since the start of the protests on November 17, there are at least ten dead, hundreds of injured and more than 4,000 detained.

The demonstrations of the yellow vests have been made in large cities such as Paris, Marseille, Lyon, Toulouse and Burdeo, but also in small towns such as Avignon (southeast), Metz (northeast) or Tourcoing (north).

Likewise, the movement reached countries such as Portugal, Germany, Belgium, the Netherlands and Lebanon, where they make similar claims regarding labor and service improvements.