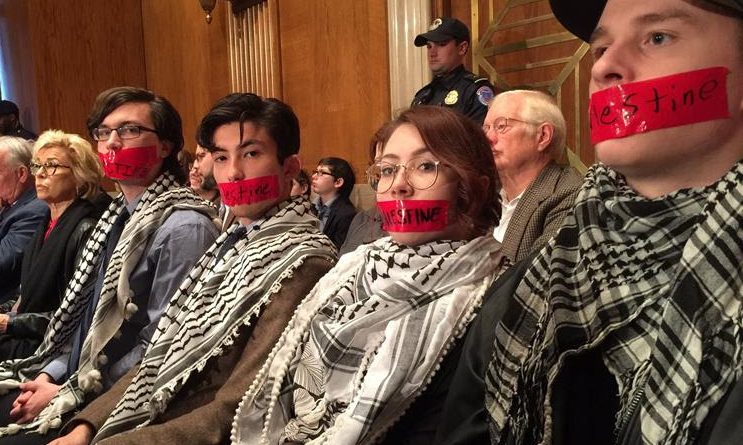 NJ elected officials of both the Democratic and Republican parties in the NJ Senate and Assembly have introduced bills (NJ S4001/ NJ A5755 ) that would virtually outlaw and criminalize criticism of the policies of Israel (and US policies coordinating with Israel) at NJ college campuses and in NJ public schools.

Under the headline RESOURCES below there are many links with ways you can support the effort to protect our right to dissent in NJ.

The pretext for this extremely repressive proposed law is the false premise that criticism of Israel is “anti-Semitic” – and the proposed law proscribes sanctions and even potential criminal penalties for such activity. I will leave the debunking of that false narrative to others more qualified (see the resources below)– for my part I will focus on:

THE DETRIMENTAL AFFECT THE PROPOSED LAW WOULD HAVE ON ORGANIZING AGAINST WAR, IMPERIALISM AND IN FAVOR OF HUMAN RIGHTS ADVOCACY IN NJ

This proposed law is a clear broad side attack on NJ students, teachers, faculty and staff’s first amendment rights to free speech. Students have a right to express their opinions, to learn about and support grass roots democracy and actions to introduce legislation. It sends the wrong message to the youngest generation who – if this law passes – will find these rights infringed upon as they try to find their political voices.

RELATED CONTENT: “Israel” Arrested 900 in Jerusalem, One Third are Children

To be clear, by proposing to outlaw criticism of Israel, NJ legislators would also be outlawing criticism of the US policy of SUPPORT for Israel. The US is a WAR PARTNER of Israel in every corner of the globe. (e.g. Central America ) The US also has ties to Israel domestically in the wall construction on the US southern border and in training US police departments. All of these activities link US policy to Israel and this proposed piece of repressive legislation could also be used to disrupt and forbid advocacy opposing those Israel related policies.

This proposed law could create a pretext to undermine antiwar organizing on NJ college campuses and in NJ public schools. US relations with and support for Israel underpins US Middle East policy. An effective antiwar movement obviously must challenge the entire war operation especially regarding US war operations in the Middle East. This law if enacted could make administrators on colleges and in public schools feel compelled to challenge students, faculty and staff that attempt to raise opposition to US war in the MIddle East and elsewhere. It will also provide an umbrella for pro-war forces to complain to administrators about anti-war activities using the proposed law as the basis.
A movement that aims to effectively challenge US foreign policy MUST engage the students and faculty at the high school and college levels. The National Security State takes pains to undermine the success of such an organizing effort. In 2018, Rutgers University, through its Intelligence Community Center for Academic Excellence, partnered with police, Homeland Security, other US government agencies and academics to sponsor a forum entitled “Fighting HateWhile Preserving Freedom” that outlined the partnership between the National Security State and academia toward those goals. The event was met with protests which I helped coordinate on behalf of #NJANTIWARAGENDA with endorsement of Anakbayan Rutgers and expert coordination by two lead campus organizers. This proposed law is the follow up step to implement the repressive ideas that were promoted at the Rutgers event.

If this law is passed in NJ – administrations at colleges and at public schools will “err on the side of caution.” If there is advocacy in the schools that touches even tangentially to any issue regarding Israel, administrations – not looking for trouble or that are already a captive asset of government agency – will forbid the activity. Students who could potentially play a pivotal role in advancing efforts to effectively advocate against war will end up having their yearning to participate crushed.

Any coalition seeking to unify against war and imperialism and to advocate for Palestinian rights needs to converge the efforts of those in the US committed to those goals with people of all of the nations that are either under attack and oppressed by a partnership between the US, Israel and other partners including UK, KSA, France, Germany, Canada, Australia, many other nations and entities. Palestinians, Arabs and Muslims play a critical role in every coalition on college campuses and in our communities not only on international issues but around domestic issues that impact everybody’s day to day lives. This proposed law aims to fracture these coalitions thus undermining our effectiveness and any potential success – around all of our fronts of struggle. I would take it a step further to venture that this law if passed and implemented will virtually shut down any and all effective dissent in NJ.

Therefore the call goes out to all those that oppose US war, imperialism and stand in favor of human rights for Palestinians – we have no choice but to destroy this initiative of the US National Security State (NJ S4001/ NJ A5755 ) The proposed law would provide a mechanism to repress our opposition. In the process, it could destroy the lives of students and teachers through false smear and criminalization of our legitimate and necessary organizing.

In addition to lobbying in every way possible the NJ Assembly, Senators and the Governor of NJ – which could include when they show up in our communities – to defeat this repressive proposed law, let us proceed to do precisely the kind of organizing this proposed law aims to disrupt and prevent. Let us put together the best organized college and high school effort this state and even this nation has ever seen – combining advocacy against war and imperialism, for human rights and liberation of Palestinians with the total defeat of this repressive proposal. We must not only defeat this repression bill, but defeat it so thoroughly that NJ legislators never try to dredge it back up from the cesspool into which it must be rendered. And as we win the battle against this repressive effort, we will use the momentum to prevent US warfare and further the cause of justice and liberation for Palestinians.

If you are interested in connecting with others to organize at an event at or near college campuses or public schools please send a text to 908-881-5275. Follow the links below for many ways to get further involved in this struggle to save our right to dissent in the state of NJ and also to render a solid defeat to this repressive initiative of National Security State and Israeli Defense Force.

SAY NO to National Security State and Israeli Defense Force ideological hegemony on NJ campuses and in NJ public schools! And let’s stop the state to state spread of these dictatorial laws. (Similar laws have passed in Florida and South Carolina.)

This page from CAIR – NJ allows you to write a letter every 24 hours to your NJ Senator and Assembly members::

This is a letter drafted by the coalition of groups with legal input from Palestine Legal followed by their announcement of this effort:

Here is a Facebook group dedicated to stopping this repressive proposed law:

These are some of the articles that have been published on this situation:

Here is a copy of the Senate version of the proposed law:

Meanwhile in a related development Rep. Ilhan Omar and others have introduced a bill to protect our right to support BDS nationally:

Here is a petition in support of the Omar initiative.