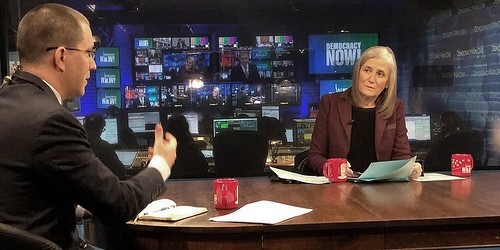 Venezuelan Foreign Minister Jorge Arreaza, said that again a group of neighboring countries of Venezuela seek to generate the conditions for a coup d’etat against the legitimate president Nicolás Maduro.

In an interview with Democracy Now, Arreaza said that this repeated attempt is sponsored by the United States, the lackey governments in the region and the Venezuelan internal bourgeoisie.

“It’s a plan: some of these parties did not want to participate in the presidential elections last year, so that when the time came for President Maduro’s oath, to not recognize him and tell the world that he was no longer president. And unconstitutionally try to make assume as President of the country a new president of the National Assembly, which nobody knows in Venezuela. It is part of a coup that will not happen because in Venezuela both the people and the Armed Forces and the institutions are aligned with the Constitution,” he said.

He wanted to highlight that in the history of Venezuela this is the process of a coup supported by the US, that is more evident: “every day, not to mention all the hours, there is a tweet, a communiqué or a statement by one of the spokesmen of US supporting this coup strategy in Venezuela.”

On the arrest of the president of the National Assembly (AN) in contempt, Arreaza said that they suspect that there are links between the officers who capture him and the extremist factors of Venezuelan opposition; It would have been a great awkwardness to send him to apprehend without any reason (or arrest warrant).