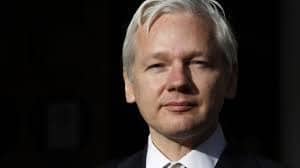 Julian Assange said that he is being spied on and details of his daily life are being sent to the FBI in the U.S.

The WikiLeaks co-founder Julian Assange, through a video conference Wednesday, said that he is a victim of espionage in the Ecuadorean embassy in London where he has been living since 2012.

“There are espionage actions (…) That information has been sent even to the FBI, in the United States,” Assange said through a video conference made from the United Kingdom, as part of an appeal hearing held Wednesday before the Ecuadorean justice system.

He also denounced the Ecuadorean authorities’ threats and objections about his work as a critical journalist, which he characterized as “illegal, with terrible precedents” for the practice of journalism.

Assange said he is living in “solitary confinement” where he is subjected to different restrictions regarding visits from third-party and access to the internet. The restrictions have started affecting his health.

In October, the whistleblower sued the government over their violating his fundamental rights during his stay in the country’s London embassy as an asylee — this was rejected by an Ecuadorean court Monday.

The lawsuit challenged the new rules, which required him to pay for medical bills, phone calls and to clean up after his pet cat. Assange’s lawyer said that his client would be appealing the decision and that another hearing would take place in the near future.

He is also fearful that Ecuador can be pressured by the United States to terminate his asylum. Assange’s lawyer Carlos Poveda, said Wednesday that there is no guarantee that Assange will not be extradited to another country where his life will be in danger.

Assange’s possible handover was also hinted at by former President Rafael Correa in an interview with RT. Correa, during whose leadership Assange was granted asylum in the embassy, also mentioned that he is an Ecuadorean citizen since 2017 and deserves his fundamental rights to be protected by the country.

Assange’s fear is not unfounded, as a report by New York Times revealed that Lenin Moreno, current president of Ecuador, discussed the possibility of handing Assange over to the U.S with Paul Manafort, U.S. President Donald Trump’s former campaign head.

Top leaders in the Democratic Party have also requested that U.S. Secretary of State Mike Pompeo brief the Congress on his talks with Ecuadorian Foreign Minister Jose Valencia that took place in November, stating that they are “deeply concerned” about whether the talks included Assange.