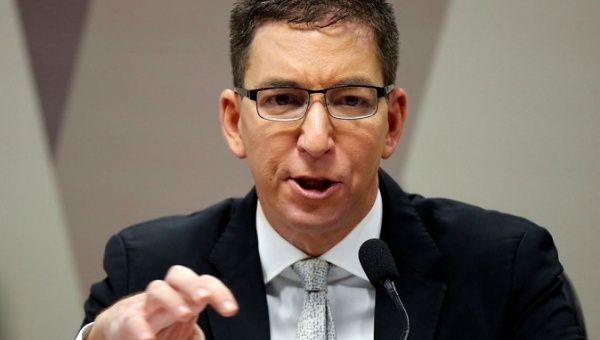 ‘Contrary to Bolsonaro’s wishes, he is not (yet) a dictator. He has no power to order people arrested,’ said Greenwald after the president threatened to incarcerate the Pulitzer Prize-winning journalist.

Indignation broke out across Brazil after President Jair Bolsonaro commented that United States journalist Glenn Greenwald “may be imprisoned” for publishing information in The Intercept Brazil that incriminates the nation’s Justice Minister Sergio Moro.

The comments of the ultra-right president were condemned by opposition politicians and journalist associations that accused him of “serious aggression against freedom of expression.”

Greenwald himself responded via Twitter that Bolsonaro “does not have the power to order people to prison.” The lawyer turned journalist added that the government has neither the prerogative to arrest nor deport him, and that he will not leave Brazil.

“Contrary to Bolsonaro’s wishes, he is not (yet) a dictator. He has no power to order people arrested. There are still courts in operation. To arrest someone, you have to present evidence to a court that they have committed a crime. This evidence does not exist,” tweeted Greenwald.

He later added, “I have the power to leave Brazil voluntarily – and I had that power all the time. But I did not and will not, despite these threats. Because? Because I know there’s nothing against me. I will defend the democracy of my children’s country,” The Intercept co-founder stated Saturday.

Statement by @TheIntercept about the threats of imprisonment from Brazil’s President Jair Bolsonaro toward @GGreenwald and our journalists working to expose corruption in his government: pic.twitter.com/UjCsGjBHrH

In June, The Intercept published a series of stories that included phone conversation and Telegram leaks between then Judge Moro, who presided over the Car Wash cases, and Deltan Dallagnol, the main state prosecutor, showing that the two colluded to convict former President Luiz Inacio Lula da Silva last year.

The evidence against Moro showed how the magistrate went to great lengths to imprison Lula in April 2018, preventing him from running in that year’s elections, the same polls that put Bolsonaro in the presidential palace.

“Over the course of more than two years, Moro suggested to the prosecutor that his team change the sequence of who they would investigate; insisted on less downtime between raids; gave strategic advice and informal tips; provided the prosecutors with advance knowledge of his decisions; offered constructive criticism of prosecutorial filings; and even scolded Dallagnol … as if the prosecutor worked for the judge,” the first part of The Intercept report read.

On Friday, Moro’s office passed an ordinance that allows the deportation of foreigners considered “dangerous.”

Bolsonaro defended his justice minister Saturday and stated that Greenwald “can be calm” because he will not be deported, but that he can be imprisoned for the crimes the president thinks the journalist committed.

Greenwald, who broke the information provided by former CIA analyst Edward Snowden about spying programs of the National Security Agency (NSA) in 2013, lives in Rio de Janeiro and is married to federal deputy David Miranda, with whom he has two adopted children.

The right-wing head of state went on to accuse Greenwald of plotting his marriage to Mirando 14 years ago and adopting two children in 2017 in order to avoid being deported, which the new ordinance safeguards against.

“He would not apply to the new rules because he is married to another man and they have adopted children in Brazil. Scoundrel, scoundrel … to avoid a problem he marries another scoundrel and adopts a child in Brazil. You can remain calm (Greenwald), you will not leave,” concluded the head of state.

The Brazilian Association of Investigative Journalism (Abraji) said that Bolsonaro “promotes and instigates serious attacks on freedom of expression … by threatening a journalist who publishes information that displeases him with imprisonment.”

“Without free journalism, the other freedoms will also die. Enough persecution,” the organization added.

Those criticisms were were shared by the Brazilian Press Association (ABI) and Lula’s Workers Party (PT).

“The show of horrors! A parade of prejudices, authoritarianism and criminal positions. Threats to democracy that cannot go unpunished,” said the PT president and federal legislator Gleisi Hoffmann over Twitter.​​​​​​​