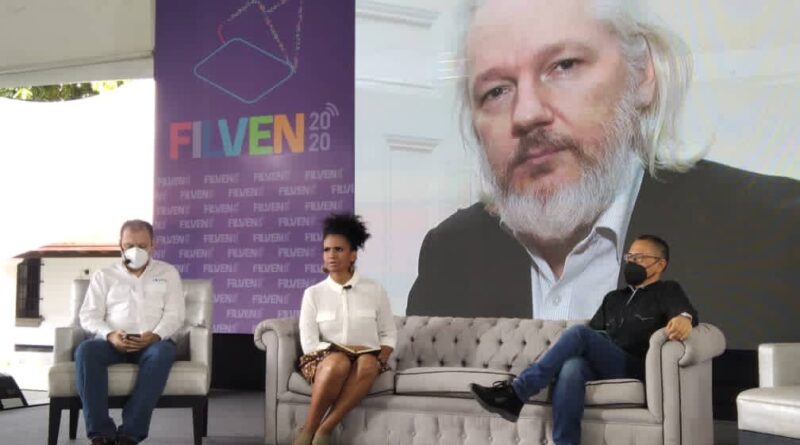 Ten years ago, the revelation of diplomatic cables that showed the maneuvers of the United States to create armed conflicts, cover-up war crimes and impede political processes brought Wikileaks and its founder, Julian Assange, to the fore. In 2012, the journalist began to experience political, diplomatic and judicial persecution considered by figures such as Guillaume Long (Ecuador’s foreign minister during the Rafael Correa government) and Arantxa Tirado (a Spanish specialist in international affairs) as punishment to the detriment of the truth, which requires the mobilization of the peoples.

Long and Tirado both made an appeal at the panel “Solidarity With Julian Assange,” held this Monday, November 16, as part of the series of forums “Journalism In Blockade Times,” taking place at the 16th International Book Fair of Venezuela (FILVEN). At the event, which on this occasion included the presence of the Minister of Popular Power for Culture, Ernesto Villegas, the origins of Assange’s situation were analyzed. Julian Assange faces a trial for eventual extradition to the United States, an objective that, according to Long’s experience, was initially veiled.

In a videoconference, he indicated that initially Assange lived through the brief era of glory that Wikileaks had, of widespread acclaim. But it was short-lived and soon we saw relentless persecution, which led him to seek asylum at the Ecuadorian Embassy in the United Kingdom on June 19, 2012.

Assange’s petition was exhaustively examined by the government of Rafael Correa, in light of international law, through instruments such as the Caracas Convention. In this document, it was established that Latin American States could grant asylum to someone if their life is in serious danger. The decision was unanimous and unequivocal, the risk for Assange was enormous.

But the siege continued with character assassinations, as Assange was accused of sexual harassment in Sweden. The journalist had to go to Sweden for interrogation, and the Ecuadorian State asked for guarantees so that he would not be extradited in the US. It took four years for the Swedish prosecutor’s office to agree to do the investigation at the Ecuadorian embassy in the United Kingdom, which finally happened in November 2016.

It was announced in 2017 that there would be no charges against Assange. Although he could go free, British authorities said they would still arrest him, because he had violated his bail and because they wouldn’t guarantee against his extradition to the United States.

Then came the government of Lenín Moreno took when he assumed the presidency of Ecuador in 2017. He revoked Assange’s asylum, even when the risks were greater than previously, violating the international principles for asylees.

All this history shows that the persecution against Assange was always due to the revelations he made through Wikileaks “about the international behavior of the US, about its war crimes, especially in Iraq, Afghanistan and other countries.” To minimize it, a campaign was launched to undermine his image and, finally, justify his extradition trial, which is being carried out in the United Kingdom.

The result will be known next February. The climate of general opinion indicates that a decision against Assange would be negatively received. But the personal and moral damage has already been done, Long warns.

“The imperial punishment has been carried out, and with that imperial punishment, what the US has achieved, whether or not he is extradited, whatever the final result of the trial, is to intimidate journalists worldwide, to demonstrate that if they dare to reveal the kinds of things that Assange has revealed, then they will be persecuted and have their lives ruined. ”

Like Long, Arantxa Tirado argues that Julian Assange, by leaking diplomatic cables through Wikileaks, exposed the true intentions of the US in the geopolitical field. Other figures such as Chelsea Manning, a military man, and Edward Snowden, a consultant to the United States National Security Agency, intervened in this task, also paid dearly for their actions.

“What was the US doing so that analysts from its own establishment decided to step forward and filter this information, which supposedly benefited the enemies of the US?” the Spanish analyst wondered.

In that sense, she highlighted the courage of Ecuador to maintain a dignified position, attached to the law, during the Correa government. “The incredible thing is that people who adhere to the law are accused of committing crimes,” she said.

Tirado also criticized the double standards of the media, who’ve remained largely silent regarding the censorship applied in the US. In that sense, she reported that although Wikileaks—born in 2006,when George Bush Jr. was president of the United States—is a valuable tool for historians and professionals in the social sciences, research that uses that organization as a source is vetoed.

“The violation of all these rights is being endorsed, by active or passive means,” the Spanish woman warned, speaking of guarantees such as the right to information.

Solidarity despite the siege
Minister Villegas thanked Long and Tirado for creating this space of solidarity with Assange, which takes place from a nation under attack. “As he has also been in his life, the Bolivarian Republic of Venezuela is currently being besieged for very similar reasons, for the defense of high principles such as respect for international law, and for the truth.”

For this reason, he reaffirmed his solidarity with the Australian journalist, whose situation is more evidence of the “world turned upside down” about which Eduardo Galeano spoke. In that world, Villegas said, things such as censorship of the transmission of information on Facebook, one of the best-known social media platforms, occur to prevent discussion about Assange.

The attacks against Assange, and against Venezuela, should have no place in a truly broad and respectful scenario. “They want to suffocate the Bolivarian Revolution,” said Villegas, “and they want to chastise anyone who dares to follow think for themselves, to follow an independent path for development, equality, and justice.”

Faced with this scenario, he exalted the courage of the Rafael Correa government for granting asylum to Assange, and the emergence of leaders such as Hugo Chávez, Luiz Inacio Lula Da Silva or Néstor Kirchner, who promoted mechanisms such as the Bolivarian Alliance for the Peoples of Our America (ALBA).

For this reason, Villegas once again called for a global outcry for the release of the founder of Wikileaks. “We assume as our own the cause of Julian Assange, from this book fair, from this place dedicated to culture, from this Venezuelan capital, besieged but dignified and standing, we stand in solidarity with this exemplary journalist, who is a permanent reference point for the genuine struggle for freedom, for the people’s right to information, which is a slap in the face to those whose daily acts of demagoguery interfere with the release of facts.”