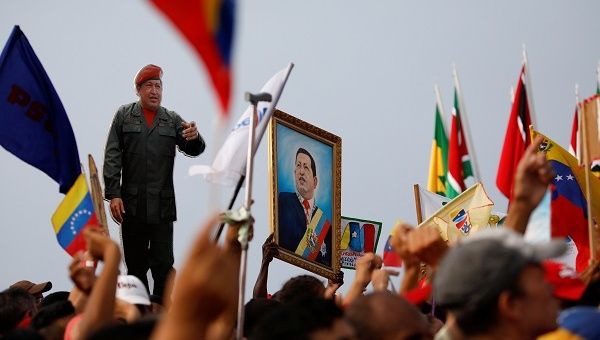 Without communal development, where is the socialism of the 21st century?

Marco Teruggi continues his examination of Chavez’s legacy.
Go for a walk in any humble neighborhood of Venezuela – urban or rural – and you will always find some form of organization. It never fails. It is no accident: it is a way to cultivate ongoing politics from point zero of the revolution. From the first speeches of Hugo Chavez to his last remarks, the call for organization was constant. It was, along with the unravelling of the historic debt, the essential task. Moreover, it was through organization that it was possible to respond to the avalanche of demands Chavismo faced during its first years and for which the institutional framework had no capacity to respond.

You can build a genealogy of the organizational forms: from social missions, public meal homes, public water aid, the Bolivarian circles, urban land committees, Zamorano communal haciendas, communal councils, communes, presidential councils of popular government, to the local supply and production committees. Each experience responded to the material and political needs of the moment; it was part of a learning and collective creation.

Arranging global affairs, being endangered like any order within a multitudinous and heterogeneous process, one could speak of three moments. The first, from 1999 to 2006, marked the constituent process for national refoundation, followed by the resolution of the historic debt in water, health, education, identification, food, with the massive shift to sectoral/claiming organizational processes. Each need was developed into a participation process. It was the stage in which the revolution faced the coup-led assaults of the right-wingers, which came to paralyze the oil industry and almost the whole country.

The second moment can be understood until 2012. A time of defeats and strategic ravings by the right, it was also a time for Chavez to consolidate his government and himself as leader. The economy grew and the socialist horizon appeared. It was no longer about boosting organizational experiences in terms of sectoral demands, but trying out forms of organization that carry the power of the transition to socialism. They are centrally the communal councils and the communes, which must install community governments in their territories.

RELATED CONTENT: Iturriza: “There are Only two Positions in Venezuela”

Finally, the current stage, from the death of Chavez in 2013 to the present. It is a period marked by a siege on all fronts. New trials of transition and co-government appeared, such as the presidential councils of popular government and a centralization in local food distribution committees. This decision can be read in pragmatic terms in view of the need to respond to the economic crisis, as well as under the predominance of a political view that discovers communal possibilities.

The common thread between the three periods lies in the call by the leadership/government to the organization. In this permanent process, one of the central dimensions of Chavismo was formed, which is his experience of collective organization. I speak of tens of thousands of communal or production committees councils, for example.

It is an essential part of the political revolution, which was ahead of the economic one. Men and women who had never participated politically, nor had any previous experience. It was about the democratic eruption of the excluded, at the same time as the emergence of new forms of democracy, particularly in the communes: ‘the expression of a new political culture.’ Organization, formation and mobilization: the revolutionary triad, the meeting between a call and a need. With a weakness: the material dependency of the organization on institutions, which also resulted in political dependence, raised by Chavez himself. To what extent is this people’s power actual power?

The unity between political identity and organizational processes gives Chavismo a radicalism to advance and resist this era. It is possible to investigate what has been left in the territories, what predominates in these adversities that seek to destroy this weave. Some experiences were integrated with others, in particular to communal councils and communes. Others have returned for the needs, such as the feeding houses, while the production committees took centrality in an accelerated way in the communities. It could not be otherwise: they are a partial food response when food is scarce or unaffordable. You could hardly have started on that scale without all the previous experience accumulated.

It is good to go further in the analysis and enter into debate about the perspectives that carry different organizational forms. The local supply and production committees have been thought of as palliative mechanisms in an emergency situation, not as socialist forms of trial in a transitional perspective. That can and should be the communes, which are the territorialization of socialism, the test of establishing it on communal governments with the capacity for self-management capacity, of being a new institutionality with the capacity to exercise a communal and national power. An articulated network of communes covering the country to come, beyond parties, movements, institutions. To put it another way: without communal development, where is the socialism of the 21st century? What is 21st century socialism? It is a question about the strategic project.

Without this organization in constant growth, there is no possibility of founding the new.

It is the Chavez formula.