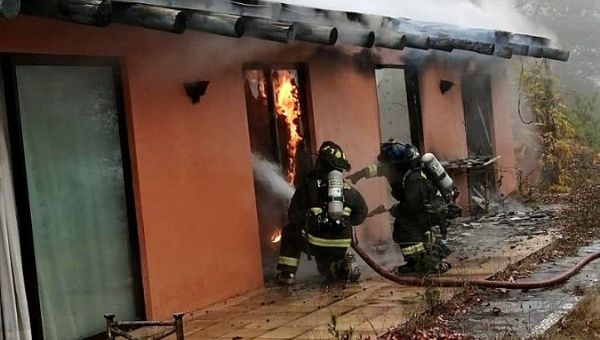 The property belongs to Jacqueline Pinochet, one of the daughters of the former Chilean dictator.

A fire destroyed a house owned by the Pinochet family located inside Los Boldos Estate – where the dictator’s ashes remain – on Tuesday in the western coastal municipality of Valparaiso in Chile.

The property belongs to Jacqueline Pinochet, one of the daughters of the former Chilean dictator. According to first responders, at this moment it is not yet known if the origin of the flames is accidental or the result of voluntary action. Chilean police (Carabineros) are investigating the incident.

The governor of the municipality, Gabriela Alcalde, said that the fire “affected a warehouse and 30 percent of a house, which is a second home and at the time of the accident was without residents.” While the fire chief, Cristian Herrera, said that the emergency was attended by about 30 volunteers to prevent its spread and that the house is approximately 500 meters from the Chapel, where the remains of Pinochet rest.

This fact has turned Boldos into a popular “pilgrimage” location for fascist Pinochet’s fans. The estate has 51 hectares and consists of five buildings. The property was acquired by Pinochet in 1994, but is currently uninhabited and served as a resting home for the family.

“The people who take care of the houses in Los Boldos property told us that this affected two rooms of Mrs. Jacqueline’s house and it is unknown who caused the fire, but maybe it could have been some vagabonds who entered,” Pinochet Foundation manager Roberto Mardones said.

A 2010 academic study by the University of Chile, requested by the country’s Supreme Court, determined that the dictator and his family accumulated US$21 million before he died and that only US$3 million of it was justified by his military salary. In 2018, Chile’s Top Court ordered the seizure of more than US$1.6 million from the assets of the late dictator.

Pinochet’s era of terror lasted since the U.S.-backed coup in 1973 until 1990. According to official data, the military dictatorship was responsible for killing 3,200 Chileans, of which 1,192 remain disappeared, and tortured more than 40,000 people.