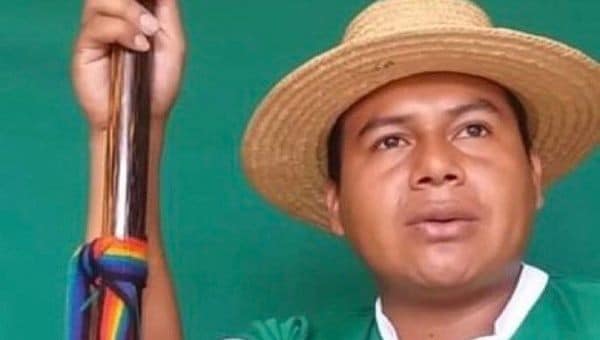 The Colombian senator and Indigenous leader Feliciano Valencia confirmed Friday that Edwin Dagua, governor of the Indigenous territory Huellas, in the department of Cauca, was murdered.

“Today the cowards, murderers, the state’s politics of death and its neoliberal model of extermination took your life but your seed will sprout and we will honor your name comrade,” the statement issued by the Regional Indigenous Council of Cauca (CRIC) reads.

Senator Gustavo Petro also pointed to the government as responsible for the murder. “Can it be that in the face of the current president’s weakness and political ideology murderers feel empowered?” Petro tweeted.

Dagua, who was one of six authorities of the Association of Indigenous Government of Northern Cauca (Acin), had received several threats against his life prior to his murder by unknown assailants.

According to Acin member, Mauricio Capaz, this is the toughest blow they’ve endured these past days in a municipality where they have registered 10 homicides in eight days.

Senator Valencia denounced that during the government of President Ivan Duque 36 Indigenous have been murdered.

Capaz also explained that a pamphlet signed by paramilitary groups, which was distributed recently included threats against Dagua and other leaders. “This Indigenous authority carried risks like all authorities in northern Cauca due to our position on territorial control, the exercise of authority and communal leadership,” Capaz said.

Violence to secure territorial control in Cauca is linked to drug trafficking networks, mining and other forms of extractive industries, and well as the monoculture-based agriculture development model.

Saturday, during the early morning, another Ingidenous governor, Lidia Gomez of the Awa people, survived an attack in the Santa Clara de Ricaurte territory, in the Nariño department.

The National Indigenous Organization of Colombia (ONIC) tweeted at 6 a.m. “In the wee hours of today the Indigenous Awa governor Lidia Gomez of the territory Santa Clara de Ricaurte, Nariño, was the victim of an attack with a firearm in her own house. She is unharmed. We demand immediate protection.”

In November, ONIC urged the government of President Ivan Duque to provide safety guarantees for their leaders who face death threats, including Edwin Dagua.

Indigenous authorities claim Dagua was granted state protection a month ago. However, at the moment of his homicide he was alone.

ONIC has reported that since late 2016 -when the peace agreement between the Colombia state and the former Revolutionary Armed Forces of Colombia (FARC) was signed- 5,730 Indigenous have been forcibly displaced, 8,245 are suffering from involuntary confinement, at least 10 leaders have been tortured, 25 recruited by illegal armed forces, and 65 have been murdered.

CRIC’s statement condemned the murder and warned they will not be silenced. “You will not silence us, your bullets might kill bodies but the ideas, the convictions, the boldness, and the essence of Edwin Dagua Ipia and the Nasa people will continue more alive and stronger than ever … This young guard, liberator of mother earth and poor community member, like he used to say, will remain present in our hearts.”