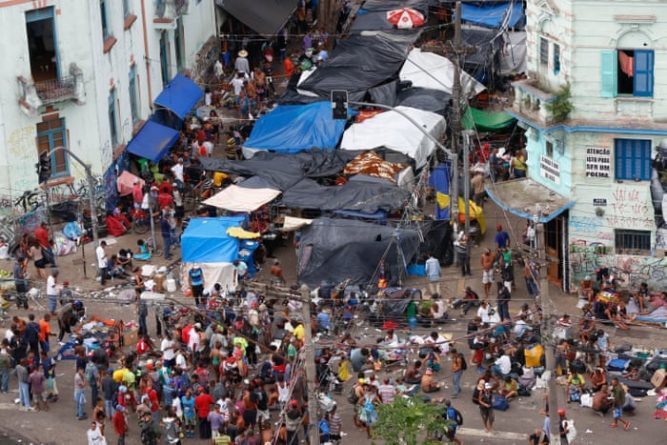 In the mid-1990s, the first addicts and traffickers began to roam the neighborhood. More than a quarter of a century later, the lack of state responses resulted in an out-of-control situation.

In the Luz neighborhood of the Brazilian city of Sao Paulo, the theft rate has increased by 20% during the last year. Its inhabitants relate this increase in crime to the emergence in that locality of an area liberated to the sale and consumption of crack in the open air , nicknamed ‘Crackolandia’ by the locals.

Some of the neighbors who suffered this addiction or who are still struggling to recover talked to RT to share their experience. One of these people is Janaína Xavier, an exadicta who now tries to help her daughter overcome the same destructive habit.

Look for an exit
“I want her to come out [of the drugs], I ask God to leave, but it depends more on her than on me,” the woman says. She adds: “I play my role as a mother, I take care of her, I give love, sweetheart, but she says it ‘s something she can not control .”

Likewise, another of her eight children suffers from neurological problems derived from the use of cocaine during her pregnancy.

Today recovered, Janaína helps to get people out of this silent hell. There are several blocks in the vicinity of the Luz station, the largest in the city. Thousands of people pass through there daily, indifferent to the permanent wanderings of crack addicts.

In ‘Crackolandia’ ” there is freedom to take drugs, ” so “if it’s something you did not do where you lived, you do it here,” says Carlos, another neighbor addicted to this drug, who says that there you can see foreigners , “people from all over the world”. Although “sometimes we have police repression, which shoots smoke bombs, shoots rubber bullets”, the local government “left this space so that drug users do not leave” the place, he assures.

In the mid-1990s, with the emergence and rapid expansion of crack, the first groups of consumers and traffickers began to roam these streets. More than a quarter of a century later, the lack of state responses resulted in an out-of-control situation .

A problem on a world scale
“When the person is trapped it is difficult to recover it,” says Arthur Guerra, an official with the Government of Sao Paulo. “We have to prevent the young person from arriving there, coordinating with future administrations to follow a plan regardless of the government that comes,” he adds, stating that “it is a long-term problem” that “will take years and years”.

Meanwhile, according to UN data, Brazil is the second country in the world in crack consumption, surpassed only by the US. The Federal University of Sao Paulo estimates the number of users of the drug in the country by one million .

Featured image: Curtesy of The Guardian