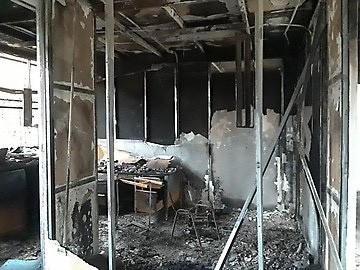 December 14, 2018. – AfroTv the only Communitary television station located in San José de Barlovento and the only one that still remains in this Miranda State was burned in the early hours of this morning by criminal hands who forced their entry to the study. They stole the cameras, computers, consoles, switches, photocopier, microphones among other electronic devices that form the core of the station, and not just that, they proceeded to set fire to the looted space, which is located on the second floor of the Ceiba building in San José of Barlovento. In the fire, important photographic and audiovisual sound archives were burned that this project approved by Conatel has been working on since 2010.

Luis Perdomo, director of the station, reported that at approximately two o’clock in the morning, the fire started in the Ceiba building and then the firefighters were called to avoid major damages and the fire spread to the Documentation Center located on the third floor where there are books and more than two thousand bibliohemerographic references of Barlovento.

The economic losses are enormous as well as the damage to the infrastructure. It is expected that the Mayor’s Office, the Government of Miranda, Minci and Conatel will help restore this unique project in Venezuela for the Afro-descendant communities.