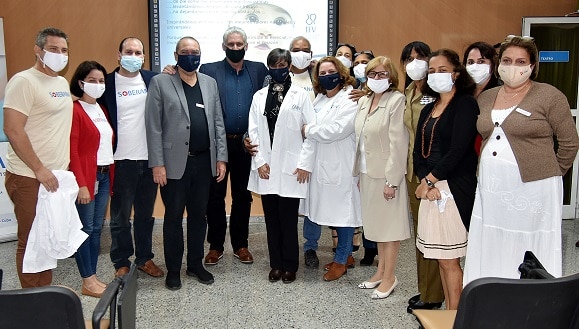 December 28, 2020.-  In the scientists of the Finlay Institute of Vaccines (IFV) is the expression of the country. You have functioned as a family, united, fought, resisted amid the adversity of the year that is ending, and you have triumphed.

The President of the Republic, Miguel Díaz-Canel Bermúdez , praised the work of the group of researchers, mostly women , during his third visit to the institution, where he was informed about the progress of the Sovereign vaccine in its variants 01 and 02.

I have thought a lot these days about the year that is ending, the hardest year in several decades for Cuba and the world, reflected the president, and you have been part of the great Cuban family, the one that has creatively resisted despite the restrictions he added.

You, he told them, have lived moments of learning, overcome difficult stages and challenges and have come this far. No Third World country has a vaccine in the clinical trial phase against COVID-19 except Cuba , which in turn has no delay with respect to the world in these investigations.

This shows the capacities that the country has created, he pointed out, but there may be capacities in other places, here there are other things that are different, that contribute more, which is the feeling, the commitment to what is done.

To the Finlay family, along with those of the other centers that have worked in the development of Soberana, we express our gratitude for what they have done, and respect and trust in what we are going to continue doing , emphasized Díaz-Canel.

The Director General of the Finlay Institute, Dr. Vicente Vérez, ratified the country’s capacity to immunize the Cuban population against the SARS-CoV-2 virus in the first half of 2021. Photo: Estudios Revolución.

RELATED CONTENT: ‘In Cuba Capital is not above Human Rights and the Lives of the People’ – Chavista Chronicles from Caracas interview with Dr. Valia Rodriguez

Doctor Vicente Vérez Bencomo, general director of the IFV and project leader, reported that the Soberanas have made significant progress in the clinical trial , 01 is ending Phase 1 and 02 enters Phase 2.

Both have shown confidence in terms of safety and immune response. Soberana 02 in particular, due to its characteristics, has shown an early immune response (at 14 days), which allows it to move to Phase 2 of the clinical trial more quickly.

Soberana 01 has also shown safety and a very good immune response, but it is slower due to the time required between one dose and another, which is why it is expected to enter Phase 2 of the clinical trial in February.

When elaborating on the development of Soberana 02, Verez Bencomo explained that in January about a thousand volunteers will be vaccinated in their different formulations , for later, after the evaluations and required permission, enter Phase 3, in which around 150 will participate 000 people in Havana.

Negotiations are also making progress to develop Phase 3 of the Soberana 02 clinical trial in other countries , due to the low prevalence of COVID-19 in the Cuban population.

Doctor Vérez Bencomo reported that the Sovereigns have advanced in the clinical trial in an important way. Photo: Revolution Studies.

The Director General of the Finlay Institute ratified the country’s capacity to immunize the Cuban population against the SARS-CoV-2 virus in the first half of 2021.

Reviewing the path of the IFV and other scientific institutions with the Soberana vaccine, which began to be developed last May, the scientist expressed, “it is incredible what we have achieved in seven months.”