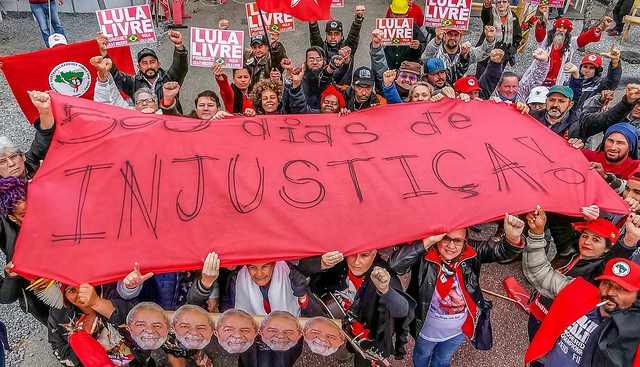 They are at the Lula Livre (Free Lula) camp, across the road from a federal prison, where Lula has been in jail for 500 days. Their greeting is a form of protest, and — if Lula can hear them — a way to keep his spirit up.

Lula’s incarceration is bewildering. He is accused of corruption without evidence. In the lead-up to the 2018 Brazilian presidential election, Lula was the clear favorite. He would have defeated the eventual winner Jair Bolsonaro by a landslide. But Lula was arrested, imprisoned and prevented from running as the candidate in the Workers’ Party.

Eliane, a member of the Workers Party from the state of Paraná, tells me that she has been at this camp for months. Lula, she says, represents the downtrodden of Brazil, the millions of people who are in despair. Brazilian democracy has been slowly eroded. It is easy to see Brazil’s institutions being battered, including the judiciary (which colluded with the prosecutors, according to materials leaked to the Intercept, to put Lula in prison).

RELATED CONTENT: Lula: The US is Behind “Operation Car Wash”

But the problem, Eliane says, is greater than that. The democratic atmosphere in the country has been worn down. Lula has become a symbol of democracy; now democracy is in prison.

What has happened to Brazil is happening all across the world. The shell of democracy remains; its kernel has been emptied out.

In early August, the Indian government arrested leaders of political parties in the state of Jammu and Kashmir, shut down the press, closed the internet, and then in the Indian parliament voted to carve up the state and change its political status. The vote took place in parliament. It had all the appearances of democracy.

And yet, the people of Jammu and Kashmir were not told what was being done to them, nor were they given an opportunity to participate in the decision-making. The elected state assembly has been dissolved, its elected officials under curfew. News of harsh police and military tactics in the state have only leaked out thanks to brave members of the press. The right-wing government of Narendra Modi has — like Donald Trump — accused the press of lying.

Democracy is so much more than the procedure to elect representatives. The democratic spirit is fostered by public activity. There are some people who join together to advocate for policy changes. There are others who are in groups to protest against something they see as heinous. There are yet others who are organized for public action, including volunteering. This range of activity enhances a democracy, bring people into activities where we can learn about why things are the way they are and how we might improve the world we live in.

From one end of the planet to the other there has been a denigration of public activity. Precarious conditions of employment and longer work hours have made it difficult for people to involve themselves in the time-consuming work of building democracy. Right-wing politicians routinely attack the idea of public action as somehow subversive. They would prefer to reduce “politics” to “elections.”

The procedures of elections have been almost broken by money and manipulation. In the 2016 U.S. elections, close to $6.5 billion was spent by the two parties. This is a monumental amount of money. The Indian election this year cost $7.2 billion — the most expensive election on record. India sits at 103 out of 119 in the 2018 Global Hunger Index. These billions could have done a lot to build infrastructure to prevent hunger. Stunningly, 92 percent of this money went to the right-wing BJP, which now rules the country.

Techniques of voter suppression whip across the world. The election that voted in Donald Trump was the first presidential election to do so since 1968 without the protections of the Voting Rights Act (1965). The Supreme Court emptied this act in 2013. During the last 10 years, 33 million people have been purged from voter rolls in the United States. In India, 21 million women are missing from the electoral rolls, approximately 38,000 women in each constituency, on average.

The production of fake news through WhatsApp groups and other communication forms is part of the attempt to foment violence and demoralization and to dampen enthusiasm for elections. Brazil suffered this WhatsApp deluge — micro targeted messages of hate riled up sections of the population towards Bolsonaro (as it did in the U.S. for Trump). He did not have to campaign for anything positive. Social media stoked up hatred of his opponents. That was enough.

Even as the normal hum of electoral democracy goes on, the ruling elites have used sophisticated means to delegitimize popular candidates. At the Lula Livre camp, the protestors talk of a “soft coup” against Lula. There are genuinely corrupt politicians in parliament, but they are untouched. Only Lula is in prison.