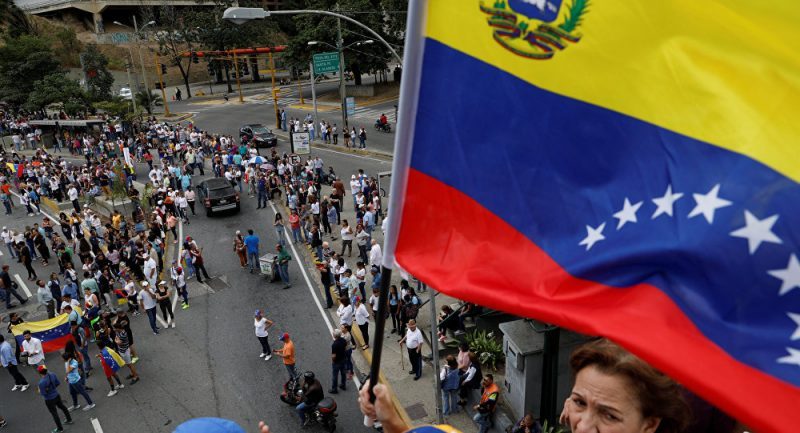 An entrenched and bloody conflict is what awaits Venezuela if the US opts for an invasion to unseat President Nicolas Maduro, making a mediated dialogue the best way of dealing with the crisis, experts told Sputnik on Tuesday.

Tensions escalated in Venezuela in January after the opposition leader and head of the unrecognized National Assembly, Juan Guaido, declared himself interim president and promised a new election. He was almost immediately backed by the United States, Brazil, and Colombia.

Maduro enjoys the backing of the military as well as of world powers like Russia and China. Guaido tried over the weekend to bring in what he described as US relief aid from Colombia and Brazil, prompting clashes with soldiers guarding the border. Maduro said on Tuesday Guaido must face trial after returning to the country.

An invasion in Venezuela cannot be ruled out completely, according to analysts. Chuck Kaufman, the national co-coordinator of the Alliance for Global Justice, said the United States would normally be wary of backlash from Latin American countries but the current administration is hard to predict.

“We are in a very dangerous moment. Normally I would say there is little chance of a US invasion because Latin America would not tolerate it. I still believe that is most likely the case, but the Trump administration is less predictable than previous US administrations so the normal cost/benefit calculations may not apply,” he remarked.

Julia Buxton, from the Central European University’s School of Public Policy, echoed that viewpoint saying the administration of President Donald Trump was capable of doing it alone, despite obvious harm to Guaido’s reputation, after Brazil and Colombia said they would not support military action.

“The US has gone it alone many times before, but if they do so this time it will severely discredit Guaido — so there are political risks… As Trump’s Florida speech also showed, Venezuela has domestic salience in the US but for purely instrumental reasons of Trump trying to secure Florida for his 2020 bid. So right now I would say chances are low but don’t underestimate chances of some form of lightning strike,” she said.

Philip Gunson, senior analyst at the International Crisis Group, noted that the Lima Group would not support a military intervention but that could change if the external effects of the Venezuelan crisis were to significantly increase.
Contrarily, Guadalupe Correa-Cobrera, from George Mason University’s Schar School of Policy and Government, said an invasion would definitely happen, considering statements made by Secretary of State Mike Pompeo and other officials.

“For me it is evident that this is going to happen considering the statements… That’s the way things are going… they are not just threatening,” he argued.

Kaufman said Washington needed a credible pretext to invade. Otherwise, it would have to resort to “low intensity warfare,” using Colombian paramilitaries to attack Venezuela’s border regions from Colombia and Brazil. That would not threaten the Venezuelan core territory, he added.

An invasion will likely succeed in its immediate goal of removing Maduro from office, Philip Gunson believes, but experts agreed that the implications for Venezuela, its economy and the wider region would be disastrous.

“It will likely lead to an entrenched and bloody conflict between pro and anti-Maduro groups, the security situation in the country which is already very poor will disintegrate further, there will not be the expected rush of foreign investment into the country and there will be real challenges stabilizing the economy,” Julia Buxton said.

The military option would make an “orderly, stable and sustainable” transition very difficult to achieve, Gunson added, seeing that the nation is already plagued by armed groups of various kind which pose a challenge for any future government.

“If the transition comes as a result of armed conflict, they will be even greater. This could destabilize the region more generally,” he predicted.

There is the chance that paramilitary violence of left and right could spill over and unify with insurgent groups in Colombia, Buxton said. There will also be a wider popular backlash against right-of-center presidents that were seen to condone US intervention.
Correa-Cobrera said a US invasion in Venezuela would send a message to the rest of Latin America that Washington could interfere wherever it deemed a government was not “favorable” to its agenda. That is why the international community must seek a peaceful way out of the Venezuelan crisis.

“You are violating the principles of democracy because you are deciding the future of a nation in a very violent way, so definitely all the organizations in the world that care about human rights should be very concerned and should be pushing for a peaceful effort to deal with this problem,” he said.

Both sides in the Venezuelan crisis must be call for dialogue because a situation where a shadow government of self-proclaimed president Guaido operates alongside Maduro’s administration and is backed by regional powers is unviable, according to experts.

“Although neither side wants to negotiate at present, a negotiated settlement remains the best hope for avoiding chaos and a protracted economic and humanitarian emergency,” Gunson said.

Buxton said the United States needs to be convinced to encourage Guaido to accept negotiations. Both he and Maduro administration should be ready to make concessions for the crisis to end peacefully.
If the United States will not support negotiations, Europe and countries supportive of dialogue should take over, she opined.

Correa-Cobrera said the United Nations was the best for the role of mediator, in addition to Russia, Mexico, Uruguay and Pope Francis who offered their help in steering the peace process in Venezuela.

“I believe that it can be done within the United Nations framework — this would give the process… the perspective that this is not about imperialism or another power but it is about trying to help to arrive to a concerted decision about who is going to be dealing with the political process in the country or how they will transition from one place to another if they really want,” he said.

Kaufman said other countries should push for resolutions by the UN General Assembly and the Organization of American States demanding respect for international law and Venezuela’s sovereignty. Both governments and grassroots groups must reject war and economic sanctions, he added.