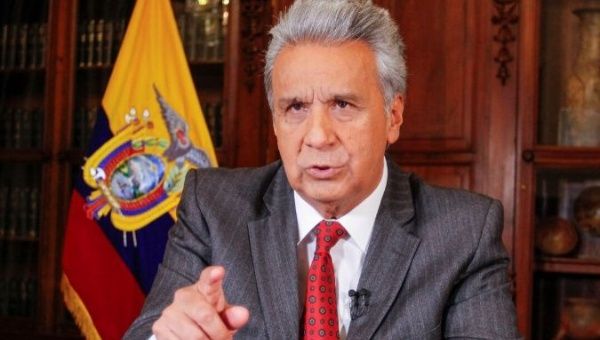 Addressing the country on national TV, the president said that the package will have three main actions, which will include public sector cuts, two new external credits and an increase of 0.75 percent to companies’ income tax.

“The global coronavirus disease is generating an economic crisis worldwide, and has hit Ecuador hard,” Moreno justified his decision, explaining that production, exports, tourism, and many other commercial activities, of almost all countries, are severely affected.

Addressing the country on national TV, the president said that the package will have three main actions, which will include public sector cuts, two new external credits and an increase of 0.75 percent to companies’ income tax.

This comes as oil prices plunged about 30 percent on early trading Sunday evening after Saudi Arabia slashed its selling prices and pledged to unleash stored supply onto the market.

Although prices stabilized by Tuesday both Brent crude and WTI are still selling at less than US$36 per barrel, a problem for the Andean nation as the government budgeted for 2020 a US$51 price per barrel.

“That means that every day, we lose a little more than US$8 million in revenue,” he added, estimating that the country would have a cumulative loss of US$2.9 billion in 2020. Also due to ongoing economic mismanagement, the country’s risk grade reached 2,792 points, the highest in more than 10 years, bordering that of crisis-struck Argentina.

Yet instead of presenting counter-cyclical measures to increase demand and secure Ecuadorians well-being, Moreno opted for austerity measures that will undermine public sector workers and the nation’s wealth on par with the International Monetary Fund’s conditionalities.

The measures announced are:

1. An additional budget cut of US$1.4 billion: US$800 million in goods and services and US$600 million in capital goods.

3. The merging of ministries of Telecommunications and Transportation and of Production with Tourism.

5. A draft bill for vehicles valued at more than US$20,000 to pay a single contribution of five percent.

6. Two credits for US$2.4 billion “with more comfortable terms than those offered the bond market.”

7. US$60 million of special funds obtained to deal with the coronavirus threat.

8. A rescheduling of debt repayments.

10. Reforms to the Planning and Public Finance Code.

11. Citizens owning vehicles valued at more than US$ 20,000 will pay a single contribution of 5 percent of the vehicle’s value.