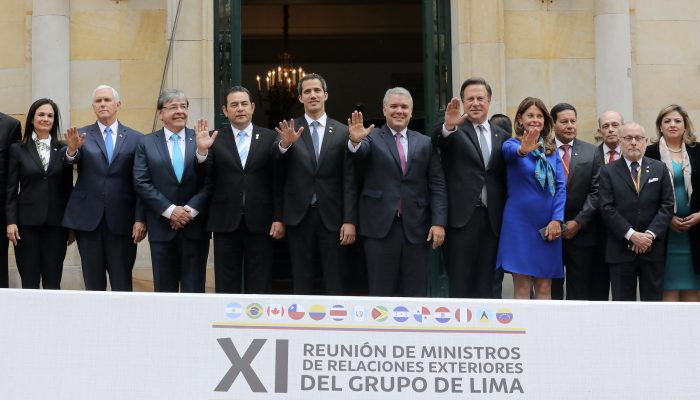 At the meeting of the so-called “Lima Group” that took place on Monday, February 25, the member countries of the bloc agreed to “request the International Criminal Court to take into consideration the grave humanitarian situation in Venezuela.” It was brought to our attention that the number of countries presented were less that the 13 members of the group.

Through a press release, which contemplates 18 points, the Group fixed the actions to be taken against the Government of President Nicolás Maduro. It is worth  remembering that the “Lima Group” is a cartel set up by the US to give the impression that it was not pushing for “regime change” in Venezuela after the reiterated failures to sanction and expel Venezuela from the Organization of American States (OAS). The group itself did not reach it’s purpose and a few weeks ago the US decided to openly lead the efforts to oust the legitimate and constitucional Government of Nicolar Maduro.

The Governments of Argentina, Brazil, Canada, Chile, Colombia, Guatemala, Honduras, Panama, Paraguay, Peru and Venezuela, members of the Lima Group, committed to contribute to the process of democratic transition and the institutional, economic and social reconstruction of the Republic Bolivarian of Venezuela:

1. Condemn the deliberate actions of the illegitimate regime of Nicolás Maduro that, without considering the suffering of the population or the insistent calls of the international community, have prevented, on February 23, the entry of basic necessities and international assistance, through acts of violent repression that caused multiple injuries and deaths on the border with Colombia and Brazil, all of which have aggravated the risk in which the lives, dignity and integrity of Venezuelans are found.

2. Express their solidarity with the Venezuelan people and recognize their courage in their struggle to recover democracy, and reiterate the commitment of the Lima Group to continue supporting it actively in this effort.

3. Denounce before the international community the illegitimate regime of Nicolás Maduro for intentionally subjecting Venezuelans, and in particular the most vulnerable population, to a systematic deprivation of food and medicine, and access to basic services, to ensure their permanence in the power.

4. Express their appreciation for the humanitarian assistance made available to Venezuela, and condemn the indiscriminate violence used by the security forces and armed groups in the service of the illegitimate regime of Nicolás Maduro to obstruct their distribution and to prevent the full exercise of rights and freedoms of Venezuelans. As a result, they will collaborate to bring those responsible for these acts to justice.

5. Decide to request the International Criminal Court to take into consideration the serious humanitarian situation in Venezuela, the criminal violence of the Nicolás Maduro regime against the civilian population, and the denial of access to international assistance, which constitute a crime of lese humanity, in the course of the procedures it is pursuing by virtue of the request submitted by Argentina, Canada, Colombia, Chile, Paraguay and Peru on September 27, 2018, and subsequently endorsed by Costa Rica and France, and welcomed by Germany.

6. Decide to promote the designation by the Human Rights Council of the United Nations of an independent expert or a commission of inquiry on the situation in Venezuela, in response to the deep concern over “the serious violations of human rights in the context of a political, economic, social and humanitarian crisis “in that country, expressed in Resolution A / HRC / RES / 39/1” Promotion and protection of human rights in the Bolivarian Republic of Venezuela “of September 26, 2018 ; and reiterate their call to the United Nations High Commissioner for Human Rights to respond promptly to the situation in that country, prior to the presentation of her comprehensive report at the forty-first session of the Human Rights Council.

7. Expresses the irreversible nature of their commitment to the democratic transition and the institutional, economic and social reconstruction in Venezuela, emphasizing that the permanence of Nicolás Maduro and his illegitimate regime in power represents an unprecedented threat to security, peace, freedom and prosperity throughout the region, which is why they are promoting the discussion of the current situation in that country in the Security Council of the United Nations, and will continue to address it in the Organization of American States. Likewise, they will advance direct negotiations with the Secretary General of the United Nations Organization so that, in accordance with their competences, they can promote the activation of the United Nations System in relation to what is happening in Venezuela.

8. Express their satisfaction at the growing number of States that have recognized the constitutional authority of the National Assembly and the President-in-Charge, Juan Guaidó, and invite those States and the international community as a whole to join the commitment of the Lima Group with the democratic transition and with the immediate provision of humanitarian assistance, adhering to the Ottawa Declaration for Venezuela. In this sense, they decide to intensify the efforts of the Lima Group at the international level, establishing all the necessary contacts and coordination, including special missions, to publicize the efforts and actions that the Group has undertaken to help restore democracy and democracy. the constitutional order in Venezuela.

9. Resolve to maintain permanent coordination with the representatives of the government of the President-in-Charge, Juan Guaidó, both in their bilateral relations and in the international organizations to which they belong and in the multilateral forums in which they participate, with a view to the return of democracy, economic reconstruction, and the immediate attention of the humanitarian crisis. As such, they will promote their recognition in international organizations and in multilateral coordination mechanisms, as legitimate representatives of Venezuela.

10. Decide to advance in the recognition of the representatives of the President in Charge, Juan Guaidó, in accordance with their internal procedures.

11. Reiterate their call to all the members of the National Armed Forces to recognize the President in Charge, Juan Guaidó, as their Commander in Chief, and exhort them, faithful to their constitutional mandate to be at the exclusive service of the Nation and not that of a person, cease to serve as instruments of the illegitimate regime of Nicolás Maduro for the oppression of the Venezuelan people and the systematic violation of their human rights.

12. Urge members of the Judiciary and the Venezuelan Justice System, including those who have been irregularly designated as such, to recognize the legitimate authority of the National Assembly and the Acting President, Juan Guaidó, and to respect the full exercise of their constitutional competencies, in order to facilitate the democratic transition and the restoration of the Rule of Law in Venezuela.

13. They appeal to the nations that still maintain cooperative ties with the illegitimate regime of Nicolás Maduro to help facilitate the search for solutions that open the way for the democratic transition process and the convocation of free, fair, transparent and credible elections .

14. They offer their strong support to the Agreement for the promotion of the Country Rescue Plan, adopted by the National Assembly on January 29. In this regard, they express their willingness to convene an international conference, and request the Inter-American Development Bank to lead the accompaniment of the legitimate authorities of Venezuela in the implementation of the institutional and economic reforms they deem necessary to reactivate the economy and offer opportunities. of social progress for all Venezuelans.

15. Reaffirm the right of all Venezuelans to live in democracy and freedom, and therefore, reiterate their support for the holding of free and fair elections, open to the participation of all political forces, with international accompaniment and observation, organized by a neutral and legitimately constituted electoral authority. For these new democratic elections to be held, they demand the immediate departure of Nicolás Maduro and the cessation of the usurpation, respecting the constitutional authority of the National Assembly and the President in Charge, Juan Guaidó.

16. They reiterate their conviction that the transition to democracy must be conducted by the Venezuelans themselves peacefully and within the framework of the Constitution and international law, supported by political and diplomatic means, without the use of force.

17. Agree to reaffirm and follow up on the measures adopted by the Lima Group previously; offer all its support to the design and execution of the electoral calendar established by the National Assembly and the President in Charge, Juan Guaidó; and to urge the international community on the urgent need to allow the entry of humanitarian assistance for the Venezuelan people.

18. They welcome the offer of the Government of the Republic of Chile to host the next meeting of the Lima Group on a date to be determined.

This information is relevant as a road map for the group of countries that in the most fragrant disregard of international law have pushed to overthrow the legitimate government of the President of Venezuela, Nicolas Maduro.