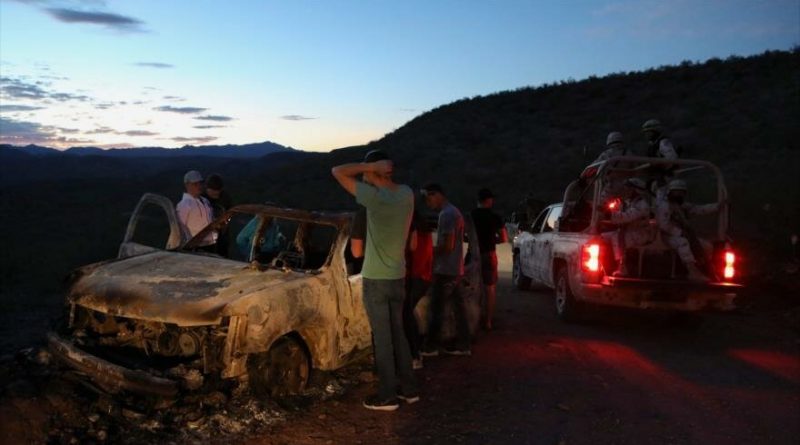 Mexico rejected Trump’s proposal for help in the fight against narco trafficking, and demanded that it stops illegal arms trafficking to Mexico.

Last Monday, three women and six children from a Mexican-American Mormon community were brutally killed in an ambush in northern Mexico. The Mexican Army attributed the massacre to a battle between the Salazars, an arm group of the Sinaloa Cartel and its rival, the criminal group La Línea, a faction of the Juarez Cartel.

The Secretary of Security and Citizen Protection of Mexico, Alfonso Durazo, said that the aggressors may have confused the victims’ vans with those of a rival cartel; a hypothesis that the relatives of the victims reject.

“We were deliberately attacked, used as bait,” said Lafe Langford, cousin of some of the victims and who grew up in the same Mormon community, established in northern Mexico for decades.

The brutal massacre has once again unleashed a wave of indignation among the Mexican people because of the high level of violence in the country, which the government has been unable to control, and that every day is taking the lives of innocents in the Aztec country.

Do you want to help? Focus on reducing drug use in the US. Want to help a little more? Avoid the legal gaps of ATF (Agency for Alcohol, Tobacco, Firearms and Explosives) and gun laws that systematically inject high-powered assault weapons into Mexico … Please help,” says Alex Le Baron González, a Mexican politician of Mormon origin, in rejection of the proposal for help from US President Donald Trump to Mexico in the fight against narcotics after the LeBarón massacre.

After hearing the news, the president of the United States, Donald Trump, hastened to offer Washington’s help to fight against the Mexican drug cartels, a petition rejected by his Mexican cognate, Andrés Manuel López Obrador (AMLO).

The government of Mexico also denounced in a statement published on Wednesday the weapons used in the massacre of three women and six children of the Mormon family LeBarón which come from the United States.

“In the first inquiries, in the collection of bushings, it allows us to recognize the caliber of .223 bushings manufactured by Remington and of American origin,” the Secretary of Security and Citizen Protection of Mexico indicated in a press conference.

RELATED CONTENT: This is How the Hemisphere Reacted to Lula Da Silva’s Release in Brazil

The Mexican government has repeatedly claimed that most of the weapons used in crimes in its country come from the United States and has demanded that Washington freeze this arms trade, as it did last September, within the framework of conversations about immigration and border security.

Alex Le Baron González, a Mexican politician of Mormon origin, reminded Trump in this regard that if he really wants to help Mexico, as he alleges, he should stop the arms trade.

“Do you want to help? Focus on reducing drug use in the US Want to help a little more? Avoid the legal gaps of ATF (Agency of Alcohol, Tobacco, Firearms and Explosives) and the law of weapons systematically inject high-powered assault weapons in Mexico … Please help,” he tweeted.

Official data shows that more than 70 percent of weapons seized in Mexico between 2009 and 2014 came from the United States. The majority are long weapons that constitute high-caliber semi-automatic rifles such as AK and AR variants.

The American magazine Newsweek also revealed in a recent report that the illegal trafficking of weapons from the United States to Mexico – a clandestine market of hundreds of millions of dollars – fuels almost all the violence in that country.

Featured image: Scene of the LeBarón family massacre, on the border between Chihuahua and Sonora, in northern Mexico, November 5, 2019. (Photo: AFP)