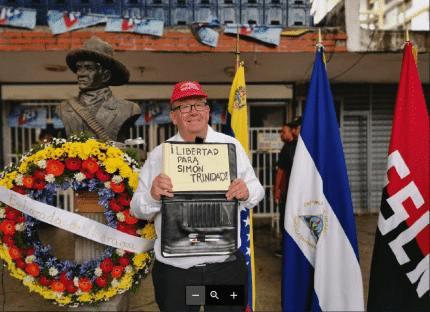 Mark Burton is a human rights defender from the United States. He is currently a member of the national leadership of the Peace Council in his country and is the legal counsel for Simón Trinidad, a former FARC-EP combatant illegally extradited under a judicial order. He accompanied the peace process in Havana and now accompanies the struggle of the Venezuelan people against the imperialist blockade and interference.

He visited Venezuela during the week of May 1, 2019, the day of the workers that commemorates the Haymarket massacre in Chicago. This day is not celebrated in his country. Then he was invited to the Sao Paulo Forum by the PSUV and returned with the same militant solidarity of a long American tradition that is anti-imperialist, anti-guerrilla, anti-fascist and also, Bolivarian.

I can describe Mark Burton as a simple and humble man, with a great affinity for political work, a critical, accessible man, willing to go anywhere in the world for the cause of Simon Trinidad, as he has already done in Europe and now in Venezuela. In the next installments we will delve into this case as well as the case of other anti-fascist and anti-imperialist prisoners from Colombia, Latin America and other latitudes, who have been victims of judicial false positives and have been stigmatized as terrorists for their struggles to make this world fairer.

Danna Urdaneta: Who is Mark Burton?
Mark Burton: I am a son, dad, husband, friend. I live here in Denver, Colorado, I am a lawyer, but I am a lawyer for the poorest and most hardworking people. I work for migrants, for Afro-descendants, I defend people who suffer repression from the bourgeois state in the United States.

DU: How was your experience on the two tours you did in Venezuela?
MB: This year I have been to Venezuela twice. This was the first time I visited Venezuela, I know Colombia well, but Venezuela little. It was a very good experience. The first time I went more with the PSUV, I saw from the point of view of the PSUV what is happening with the economy and all that. The second time I was more with the other parties of the great patriotic pole: the Communist Party of Venezuela, the Patriotic Party for All, the People’s Electoral Movement; and other groups like the Bolivarian Continental Movement, social movements like the Simón Bolívar Coordinator, and there I learned that the situation is a bit more complex than I had seen at the beginning: there is a struggle against imperialism, but there is also a class struggle as there is everywhere.

RELATED CONTENT: Communist Parties of the World Condemn Coup and Call for Solidarity with Bolivia

DU: Who is Simon Trinidad?
MB: The question is a bit complex, because he is many things. The first thing is that he comes a bit from privileged Colombian society, so he is a person who has lived the first part of his life well. But he has always had in his heart the interests of the poorest people: the peasants, the workers. He was a fighter, but a fighter of excellence, because he was a person completely committed to his struggle, with very firm, complex ideas. He is also a person of good will, a good person. He is my client, but I also consider him my friend.

DU: What (do you) say to people who don’t know who Simón Trinidad is and who fear solidarity with his case because of the stigmas against him?
MB:Well, there are many people who are afraid to enter the struggles for political prisoners, for Simón Trinidad or others, such as Comandante Carlos (Ilich Ramírez). But it is very important to shed some fear. I was very afraid to represent Simon Trinidad here in the United States, because there is a lot of repression against the left here, and, against the Colombian left. Then I lost my fear, my shyness. It is very important that people do that, because these political prisoners are important in everyone’s struggles. While one is fighting for political prisoners, one is fighting for his people too, for justice for all, for the big issues. So it is very important to lose this shyness.