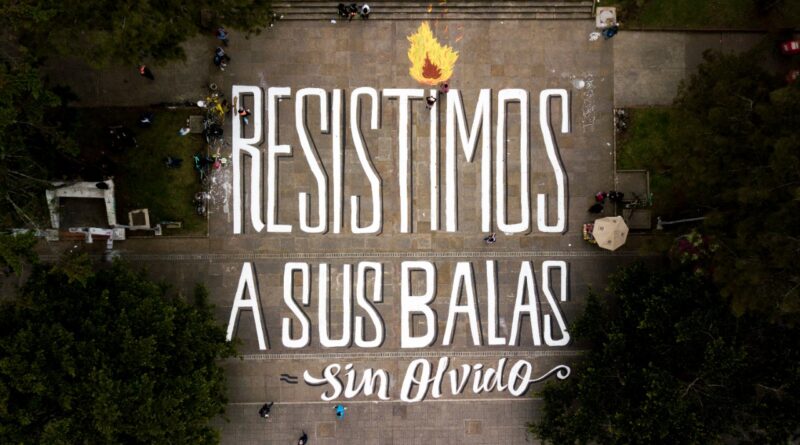 The nationwide protest was carried out in rejection police brutality, economic crisis, massacres and the indifference of the national government towards them

On September 21, thousands of Colombians participated in a national strike and mobilized across the country against the right-wing government of president Iván Duque. Several massive demonstrations were carried out in different cities in rejection of police brutality, economic crisis facing the country due to the COVID-19 pandemic and ceaseless assassination of social leaders.

A large number of citizens and members of various human rights organizations, left-wing political parties, social movements, students, teachers, women, LGBTQI, Indigenous and Afro-descendent organizations took to the streets throughout the country to express their discontent. The call for the national protest and strike for life and peace, against crisis and violence was given by several social organizations and trade unions.

The capital city, Bogotá, was one of the epicenters of the national protest condemning the indifference of the national government towards the serious situation unfolding in Colombia over the past several months. Demonstrations were held in at least 14 different parts of the city.

Similar protests were carried out in the cities of Barrancabermeja, Barranquilla, Bucaramanga, Cali, Cúcuta, Ibague, Manizales, Medellin, Pereira and Popayán, among others. It was the biggest anti-government protest since the arrival of the pandemic in the country.

Throughout the day, a group of more than 10 alternative media projects part of the “Informative Alliance in Defense of Social Protest,” organized a live stream with interviews with political leaders as well as live footage from protests across the country. The initiative sought to break the mainstream media blockade and distortion of the protests that took place in Bogotá and other cities following Javier Ordóñez’s assassination. According to the left-wing media projects most of Colombian mainstream media has sought to stigmatize protesters and create narratives that support the criminalization of those that participate in the mobilizations.

Organizations reported a high presence of the state security forces in the mobilizations. Although the authorities assured that the police officers wouldn’t carry firearms during the marches and repress the protests, the officials of the Mobile Anti-Disturbances Squadron (ESMAD) responded to the peaceful demonstrations with violent repression.

According to a report prepared by human rights organization Defender la libertad: asunto de todas, the ESMAD officers interrupted the mobilizations in Bogotá, Medellin, Popayán and dispersed the crowd with teargas. In addition, a large number of protesters were detained in these cities and several others were injured.

Progressive leader Gustavo Petro, who also participated in the march to Plaza Bolívar in Bogotá that was repressed by the ESMAD, condemned the police violence and the violation of the constitutional right to social protest of the citizens. “What is being done in Bogotá is a clear violation of human rights. Peaceful citizens cannot be prosecuted just for protesting,” wrote Petro in a tweet, urging the mayor, Claudia López, to take actions to protect the people.

The Common Alternative Revolutionary Force (FARC) party also denounced the police actions. “They said that the police weren’t going to be armed, but here you can see how they attack people who demand peace and a dignified life,” wrote the FARC party in a tweet.

One of the central demands of the protests was justice for 46-year-old law student and taxi driver Javier Ordóñez, tortured and murdered by two officers in Bogotá on September 9 as well as for the 13 other people killed by the police on September 10 during the mobilizations demanding justice for Ordóñez. A large rally was held in front of the Memory Center in Bogotá, in commemoration of all the people killed by the Colombian police.

RELATED CONTENT: Colombia: “The People Grew Tired and Took to the Streets to Denounce the Repression” (Interview)

The deepening of the economic crisis and growing unemployment, which surpassed 20.2% in July, was another factor that motivated the protests. Thousands of people also denounced state abandonment and lack of job guarantees and decent housing. Various labor unions, pensioners and students organized in the National Strike Committee have been vocal in rejecting the recently approved Decree 1174, which imposes several regressive labor and pension reforms.

The protesters also demanded the cessation of the wave of massacres hitting the country, the systematic assassinations of human rights and land defenders, community and social leaders, the ex-combatants of the Revolutionary Armed Forces of Colombia (FARC) guerrilla group, and the violence against women and LGBTQI people. A number of protests were held in Bogotá and Cúcuta outside the headquarters of mainstream media outlets for promoting the stigmatization and criminalization of social leaders and their social struggles.

The national strike coincided with the International Day of Peace, a day which continues to hold a great deal of importance for Colombia. The people of Colombia continue to demand that the national government comply with the peace agreement signed with the FARC guerrilla group, implement measures to protect those who raise awareness to the problems of their communities and fight for their rights and put an end to violence against them in the country.

According to the Institute of Development and Peace Studies (INDEPAZ), 246 people were killed in 61 massacres registered in Colombia till September 20 of this year. The latest massacre that took place on September 20, in the department of Nariño, where four men were shot to death.

Additionally, the organization reported that between January 1 and September 20, 2020, over 215 environmentalists, human rights defenders, Indigenous, peasant and social leaders, and more than 43 ex-combatants of the FARC, who are in the reincorporation process, were killed.

Since the signing of the peace agreements in November 2016 until today, over 1,000 social leaders and human rights defenders and over 200 ex-combatants and their family members have been assassinated.

Featured image: Mural painted in the National Park in Bogotá during the national strike. It reads: “We resist your bullets, and do not forget” Photo: Andrés Moyano