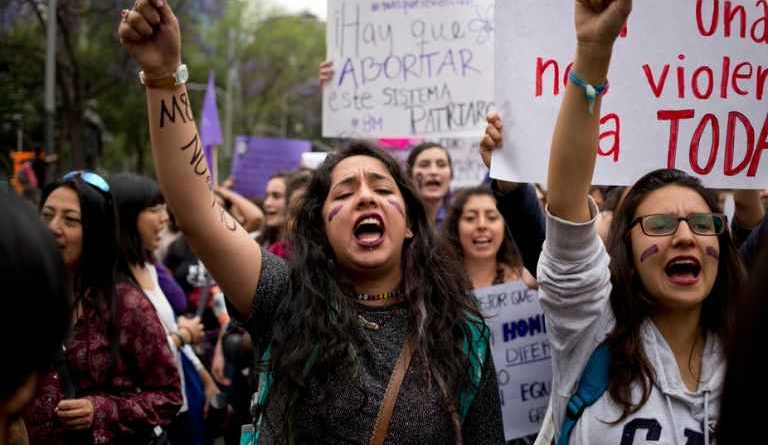 I am writing on the eve of March 8, the day when millions of women will take to the streets of Mexico and the world to demand an end to the multiple forms of violence against us. And a day later we’ll stage a strike. We are not going to stop ourselves, we are going to stop a system that is violent to us and we will not be, at least for one day, part of it. Talk to ourselves and think about ourselves will be our task.

Regardless of what happens with this #8M and #9M, women have gained a space that will hardly be released again. In recent weeks, the example is being set by teenage and young women. In the face of institutional blindness, impunity and indifference, contingents in uniform and backpacks are confronting their harassing and rapist teachers, displaying them on public clotheslines, in the streets and in school toilets. They claim to them that they are looking at their breasts that they are touching them, sending them inappropriate messages that invariably refer to their bodies.

Students of the Oaxaca High School succeeded in expelling a teacher identified as Jorge C S, whom they are accused as a sexual harasser. The students confronted him at a shouting match to such an extent that the police had to arrive to take him to the Public Prosecutor’s Office. Similar protests have taken place at four other sites in the Oaxaca school district.

And in Cuautitlan Izcalli, Mexico state, girls between the ages of 12 and 14 confronted their high school principal chanting A Rapist in Your Way, for accusing them of provoking their classmates by the way they dressed.

Also in the state of Mexico, students from Adolfo Lopez Mateos High School reported 25 teachers for touching, harassment, sexual abuse and sending around photographs of the students. And for the same pattern of sexual harassment, university students mobilized in Michoacán, Veracruz and Baja California this Friday.

A strong wind is coming. The world revolution is green and violet. We arrived at this March 8th and 9th by kicking the door open and changing the rules. There’s a lot to do, almost everything, but there is also less to do. #NotOneWomanMore (Ni Una Menos).