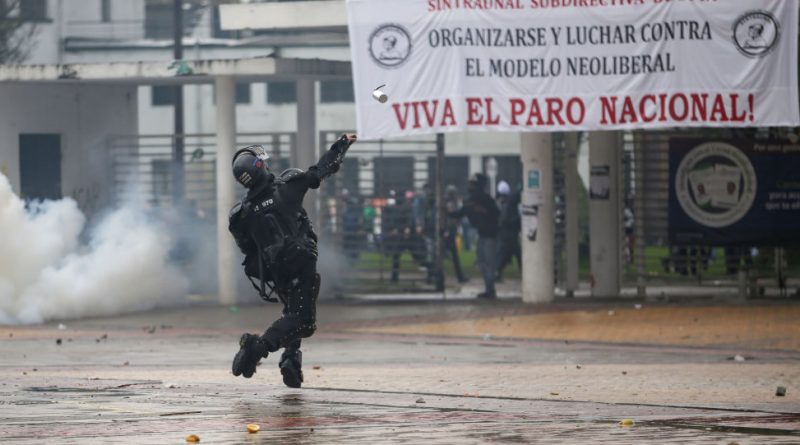 “The strike continues”, that is one of the hashtags used by Colombians that have flooded the streets with complaints against the government of Iván Duque in the framework of the national strike on November 21. Sputnik reviews key moments during the historic mobilization.

“And now that?”. That is the question that resonates in Colombia. With songs, banners and multiple claims, on November 21 a national strike was held against Duque and the ‘package’ that aims to boost reductions in the minimum wage for young people, a ‘fare hike’ of electricity and changes in the pension system .

In addition, there were demonstrations against the death of social leaders , attempts to regulate social protest and a demand the Police Riot Squadron to be dismantled and peace agreements with the FARC be fully implemented.

Unemployment and demonstrations were called by various groups of workers and students, and social organizations. The day was the biggest wave of protests against Duque, was topped with a “cacerolazo”.  After the massive peaceful demonstrations that took place throughout the country, [there have been violent] incidents concentrated in Bogotá and Valle del Cauca where three people died.

There were denunciations of police abuse during the “cacerolazos”, with police brigades breaking windows of houses and apartments participating in the “cacerolazo” along with car windows.

Venezuelan Attorney General, Tarek William Saab, called it “state terrorism”, posting a video in his twitter account showing how an unarmed demonstrator was killed by a police gunshot from the back.

This is how Ivan Duque’s exercises “democracy” in Colombia. https://t.co/u9tEAXXSWz

The situation in Cali: “collective panic”
The Mayor’s office of Cali had decreed a curfew between 19:00 on November 21 (GMT-5) and 6:00 on November 22. The Colombian army confirmed the deployment of the Third Brigade military troops that, along with the police, patrolled the streets of Cali, the third most populous city in Colombia.

However, at nightfall on the night of the 21st, the dissemination of false and true news about impending robberies caused people to arm themselves with sticks, stones and firearms to defend themselves, the magazine Semana published . A “collective panic” was generated, said Maurice Armitage, mayor of Cali, at a press conference.

“We have 46 injured police, we have 51 injured civilians, 56 looting, 19 buses that were vandalized,” Ruiz told reporters.

Thirsty bogota
The local government decided to decree “ley seca” (liquor sales prohibition). According to the right-wing mayor of Bogotá, Enrique Peñalosa, ‘we want to avoid tragedies and that the combination of alcohol with possible excesses that could be presented generate alterations in the city; we want to control and guarantee the safety of all citizens,” published El Tiempo.

“There are political interests that enjoy violence and criminal actions, and would like to make Colombia into another Venezuela,” Peñalosa said and warned citizens “not to be used politically these days.”

The national government movements
Duque convened an extraordinary council of ministers at the Casa de Nariño (seat of the government, in Bogotá), to evaluate the effects of the night’s marches protesting against his administration.