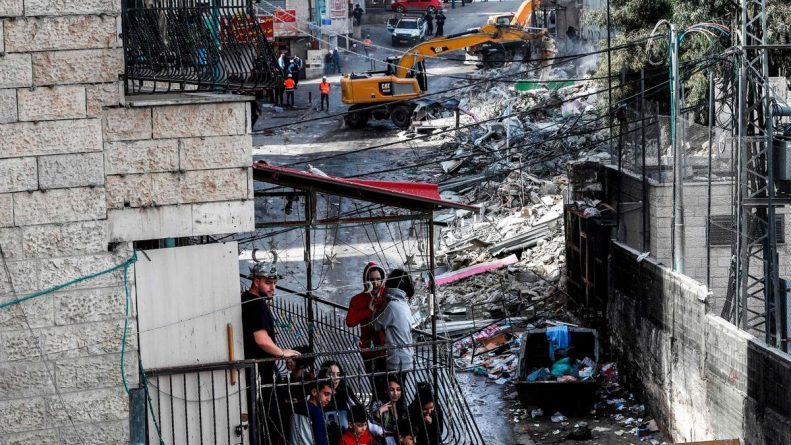 The number of Palestinian homes in occupied East Jerusalem that were demolished by Israel’s military in a single day peaked on April 29, when 31 structures were flattened, the UN’s envoy for Middle East peace said on Wednesday.

In his monthly briefing to the Security Council, Nickolay Mladenov reported that the figure was the highest daily total since the UN Office for Coordination of Humanitarian Affairs (OCHA) began monitoring such activities in 2009.

Mr Mladenov called for “an immediate halt to the Israeli authorities’ destruction of Palestinian-owned property in East Jerusalem”.

The demolitions are justified by Israel on the grounds that the structures are not approved by Israeli-issued building permits. However, such documents are near impossible for Palestinians to obtain.

The prospect of peace between Israelis and Palestinians is at its lowest ebb for decades.

Adding to the thin chances of any political settlement is scepticism over a long-promised US peace plan that if it is released will come after a series of decisions from President Donald Trump that have favoured Israel.

Since entering the White House, Mr Trump has moved the US embassy in Israel from Tel Aviv to Jerusalem, ended American funding for the UN agency for Palestinian refugees (UNRWA), and recognised Israeli sovereignty over the occupied Golan Heights. The US also shuttered the Palestinian diplomatic mission in Washington.

RELATED CONTENT: Trump’s “Deal of the Century” Will Use Sanctions, Military Threats to Force Palestinian Acceptance

At the weekend, however, the US announced that Bahrain would next month host an economic conference as part of the economic aspect of the peace plan devised by Jared Kushner, President Trump’s son-in-law, and Jason Greenblatt, a White House envoy on Middle East peace.

Mr Mladenov welcomed the planned event in Manama but echoed the widely-held international view that a two-state solution is the bedrock of any peace settlement. US officials, including Mr Kushner, have in recent weeks indicated that a separate and sovereign Palestinian state will not be central to their forthcoming proposals, adding to doubts that they will be effective.

“Humanitarian and economic support is very important for people, as well as for creating an environment conducive for viable negotiations,” Mr Mladenov said. “However, the solution to the conflict remains a fundamentally political process.”