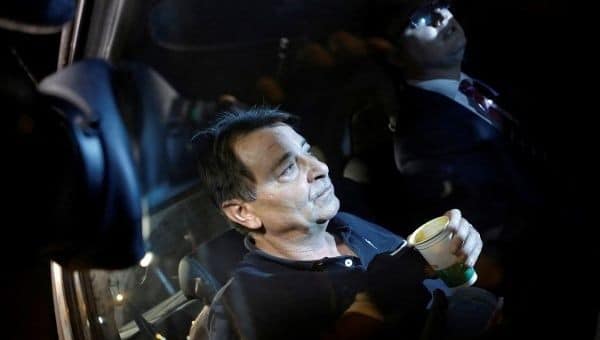 Bolsonaro, making friendly moves towards right-wing governments around the world, told Italy’s far-right Interior Minister Matteo Salvini that Battisti is a “gift” to them.

Cesare Battisti, author and former member of the left group Armed Proletarians for Communism (APC), who has been on the run since 1981, has been arrested in Bolivia and is expected to be extradited to Italy, officials said Sunday.

Battisti was arrested by a special team of Interpol agents made up of Italian investigators encouraged by the far-right administration of Brazil’s Jair Bolsonaro.

“He will soon arrive in Brazil and from here will be transferred to Italy to serve a life sentence,” Filipe G. Martins, a senior aide on international affairs to Brazilian President Jair Bolsonaro, tweeted.

Battisti, 64, faces life in prison in his home country, where he was convicted of four murders committed in the 1970s. He has denied responsibility for any deaths.

He was helped to escape from prison in 1981 and lived in France before fleeing to Brazil to avoid being extradited.

Far-right Bolsonaro has is making friendly moves towards right-wing governments around the world, and told Italy’s far-right Interior Minister Matteo Salvini that Battisti is a “gift” to them.

Salvini thanked the police and all those involved in the capture of Battisti.

“I thank with all my heart the president Jair Bolsonaro and the new Brazilian government for the changed political climate,” he said.=

The “climate” he is referring to involves Bolsonaro pledge to “cleanse” Brazil of leftist and communist ideology. Days after assuming the presidency, Bolsonaro authorized the dismissal of some 300 state workers on temporary contracts.

“It’s the only way to govern with our ideas, our concepts and to carry out what Brazil’s society decided in its majority,” said Chief of Staff Onyx Lorenzoni at a press conference. He added that the purge aimed “to do away with the Socialist and Communist ideas that during 30 years have led us to the chaos in which we live.”

Italian President Sergio Mattarella expressed Sunday his satisfaction over Battisti’s arrest. “We hope Battisti is swiftly handed over to Italian justice,” he said.

Battisti, who has become a successful novel writer, said last year he would face torture and death were he to be sent back to Italy.

His lawyer told Reuters last month that he had filed an appeal against the Brazilian Supreme Court decision, seeking to block another attempt to extradite his client.