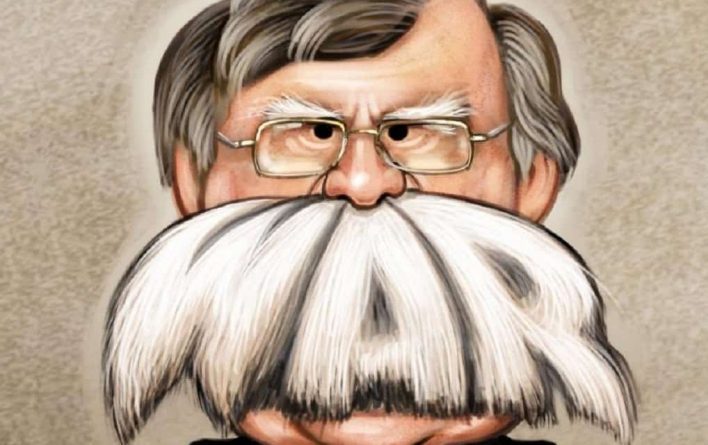 Donald Trump’s national security adviser is stoking tensions with North Korea, Iran and Venezuela, in line with decades of taking the most hawkish position on any given issue

The US is now engaged in three major confrontations around the world that have the potential to degrade into war. And in the driving seat on all three fronts is John Bolton, one of the most fervent believers in American military power ever to work in the White House. Missouri House passes extreme eight-week abortion ban – as it happened Read more

Donald Trump’s 70-year-old national security adviser has been a fixture in US foreign policy over the past four decades, and has spent that time, whether in or out of government, mostly arguing for the most hawkish position on any issue put in front of him. “He actually believes when America leads, the world is a safer and better place – not just for us but for the world,” said Mark Groombridge, who worked for Bolton for more than 10 years.

In the Obama era, Bolton’s bristling walrus mustache was a near constant presence on television, almost always Fox News, from where he would vent scorn and spleen on the Democratic administration. These days, Bolton looks considerably more cheerful, having reached the peak of the policymaking establishment that had once seemed out of his reach.

Bolton seems to have played a key role in the collapse of the second Trump summit with Kim Jong-un in February, when he appeared to have drafted a maximalist list of demands for all-or-nothing disarmament that was presented to the North Korean dictator in Hanoi. A year of diplomacy ground to a halt, and Kim, who had been expecting a more gradualist approach, has now started goading the US with a return to missile tests. In the standoff in Venezuela, Bolton was again centre stage, making himself the lead US voice for a failed effort at regime change in Venezuela in late April, producing a personal video appeal calling – in vain – on Nicolás Maduro’s top aides to defect.

Behind the scenes he has urged a reluctant US Southern Command to come up with ever more aggressive solutions to Maduro’s hold on power. And in the fast-moving escalation of tensions with Iran, it is Bolton who has seized the initiative, spun military deployments in the Gulf that were already in the pipeline as confrontational steps against Tehran, and reportedly irritated some in the Pentagon and intelligence agencies by putting a sensationalist spin on intelligence about Iranian military movements.

Bolton is reported to have convened a deeply unusual meeting on Iran on 29 April, not in the White House, but at CIA headquarters. It was an echo of the buildup to the Iraq war, when Dick Cheney, George W Bush’s vice-president, did the same thing. It now appears likely that Iranian military preparations that the intelligence appeared to suggest, may have been contingencies in anticipation of a US attack – not an unrealistic expectation in view of Bolton’s record. In 2015, he savaged Obama’s diplomatic efforts and penned a now infamous commentary titled To Stop Iran’s Bomb, Bomb Iran.

Bolton grew up in a working-class Republican family in Baltimore, and his first political experience was as a volunteer in the doomed 1964 campaign of Barry Goldwater, a staunch conservative from Arizona.

Bolton, who saw Goldwater as having been caricatured by the mainstream media, deepened his dislike of liberal eastern elites at Yale University, where he arrived in 1966 on a scholarship. Unlike many of his fellow students, he fiercely supported the war effort in Vietnam, but not to the point of taking part himself. He avoided the draft by joining the Maryland national guard.

He put his law degree to use as a counsel in the Reagan administration, and in 2000 Bolton was one of the Republican lawyers flown into Florida to help tilt the deadlocked election in Bush’s favour. In Bush’s state department, Bolton went to work dismantling US diplomatic efforts. He gleefully described taking a “hammer” to the 1994 Agreed Framework deal with North Korea. It was already fraying but it had at least kept Pyongyang’s plutonium production in check for seven years. The Bush team ruled out talks with the rogue regime, but, argued Christopher Hill, a former US lead negotiator, it had no workable alternative. “You would think John Bolton wanted to invade North Korea,” Hill said. “I never saw him put on a helmet, pick up a gun, so I’m not sure what he had in mind with that.” “This is someone who does not have an interactive mind. He has his perspective, his position, and that’s the end of it,” Hill added.

In the run-up to the Iraq invasion, Bolton was serving as under-secretary for arms control in the state department. He was not making the policy, but he was enforcing it. In one telling episode, he was dispatched to The Hague to get rid of the director general of the Organisation for the Prohibition of Chemical Weapons, a Brazilian diplomat called José Bustani, who had convinced Libya and Iraq to sign the Chemical Weapons Convention. That would have undermined the case for war with Saddam Hussein, and Washington was furious, insisting Bustani had exceeded his mandate. Bolton arrived in the Netherlands in February 2002 with an ultimatum. “He came to my office and said: ‘You have 24 hours to quit, and this is the instruction from Mr Dick Cheney,’” Bustani recalls. Bustani refused, pointing out he had only recently been elected for a second term with US support. “And then Bolton said: you better think it over, because we know where your kids are.”

  Bustani’s two sons were working in New York at the time. Bustani was stunned and held his ground, but to no avail. The Bush administration convened a special conference of member states and ultimately forced Bustani out. Bolton has previously denied making the threat about his children. “It was a very unhappy experience,” Bustani said. “This man is different from anyone I have met in my life. He doesn’t allow for a dialogue. You don’t discuss anything with him. It’s just brute force, that’s all.” Bolton’s management style came back to haunt him when he applied for his next job, as US ambassador to the UN, in 2005. The Senate refused to confirm him, and Bush had to bypass Congress altogether, putting him in the post with a temporary appointment that ended in 2006.

He spent his years outside government in high-paying jobs at the American Enterprise Institute, the premier conservative intellectual hub in Washington, as a Fox News pundit, and most notably a paid speaker for the cult-like Iranian opposition group, the People’s Mojahedin Organisation (MeK), which was for many years categorised as a terrorist group by the US and EU. e a Stradivarius’, according to one former aide. It is that background that has convinced Tehran that Bolton is implacably set on forcible regime change. If there is to be an off-ramp on the road to war, and a return to dialogue it may require Trump to fire Bolton. Trump has joked with other officials and foreign leaders that Bolton wanted to get him into a war. “I actually temper John, which is pretty amazing,” the president told reporters last Thursday.

But there have been reports that the joke may be wearing thin and that Trump is growing concerned about the direction Bolton is leading him. “John played Trump like a Stradivarius,” Groombridge, Bolton’s former aide, said. “John understands and knows the president very well … He knows to keep it very simple. “[But] I think his influence has waned in the last month or so because he was, unfortunately, in my opinion, factually wrong about the strength of opposition in Venezuela. And now you’ve got a number of people squabbling … about what’s going on with respect to Iran.”

Groombridge added: “The problem is that we have a president who is so mercurial that you know he could wake up at four in the morning and just randomly tweet: John is gone.”