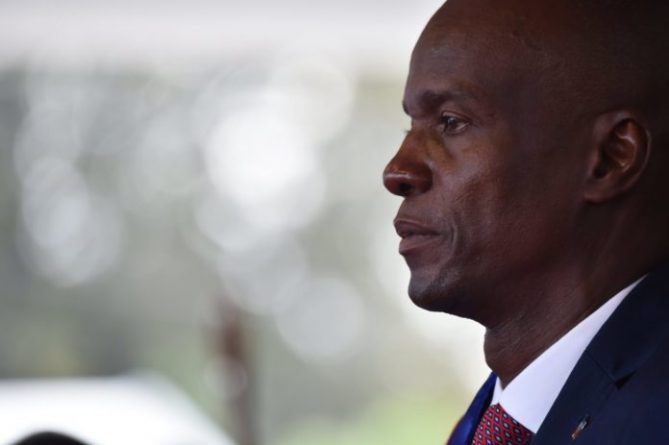 By choice or by force, President Jovenel Moïse will have to step down. He will not finish his term as he would have liked. This is not a wish or speculation. It is obvious that this will become reality. It is the circumstances and the imperatives of the political conjuncture that will compel him either to flee the National Palace, leaving the country, or to submit his resignation to the nation. In one case or the other, he will be forced to give up power before 2022. He has no choice.

His last attempt on Mon., Jun. 17, 2019 to dialogue with all the forces of the country failed. From the most radical to the most moderate, all formulated one demand: his resignation. The majority of the actors declined his invitation to meet him at his private residence in Pèlerin 5 of Pétion-Ville. Those who agreed to make the trip just wanted to verbally tell him that it was no longer possible to remain in power. The dice are thrown for Jovenel Moïse. Even his biggest international supporters, among them the U.S. government, are starting to distance themselves.

The U.S. State Department’s Fri., Jun. 14, 2019 call for the establishment of a government to face Haiti’s challenges, in muted diplomatic language, proves to President Jovenel Moïse that he no longer has Washington’s support. Therefore, he and his entourage must draw the necessary conclusion: they must go. Maybe later will be too late. Stubbornness in this kind of situation will not help. It can even make things worse.

How has former President Michel Martelly’s successor reached this point of no return? After Acts I and II of the political mobilization that nearly prevailed last year and the beginning of this year, Jovenel Moïse had regained control of the situation without winning the war that was far from over. The opposition, regardless of sector, never lost hope. And for good reason. The soil of the PetroCaribe fund is a vector that carries all the evils of bad governance. It turns out to be a rebounding matter.

Then came the publication of the first part of the audits of the Superior Court of Auditors and Administrative Disputes (CSC/CA) initiated at the request of the Haitian Senate following two investigations conducted by the Senate’s Anti-corruption Committee, chaired on the one hand by Youri Latortue and on the other by Evallière Beauplan. The first Report of the Court of Auditors on the use of the PetroCaribe Funds published on Jan. 31, 2019 had given a taste, a sort of overview, of the socio-political explosion that would follow with Volume 2 of this unprecedented audit. The first Report was well-received by the government, principally by then Prime Minister Jean-Henry Céant. Even President Jovenel Moïse and his friends had reacted positively to the Report. They thought that the work of the judges of the Court of Auditors would stand as proof that the National Palace did not seek to prevent this institution from doing its job.

PRESIDENT JOVENEL MOÏSE IS AT THE HEART OF A CORRUPTION SCANDAL THAT EXCEEDS THE EXPECTATIONS OF HIS POLITICAL OPPONENTS.

Although the opposition tried to use the Report, it failed to mobilize the population around it. After a few demonstrations around the capital, there was a big silence on the first Report. Nevertheless, the radicals and especially the PetroChallengers had warned that they were waiting for the Report’s second part, in which there were promised to be more details on the use of the PetroCaribe Funds by several companies, including those of Jovenel Moïse before his accession to the presidency, before asking justice to crack down on the plunderers of the public accounts. Even though an impressive number of companies and individuals were named in the first Report, all eyes were already fixed on Jovenel Moïse’s Agritrans SA, which was believed to have benefited curiously enough from the PetroCaribe Funds for jobs that had nothing to do with its field of expertise.

Contracts for the construction and renovation of roads were signed between the State and Agritrans SA and Betex, two private companies headed at that time by Jovenel Moïse for an amount of 39,990,399 gourdes ($894,640) (Agritrans SA) and 34,998,785.50 gourdes ($752,662) (Betex), huge amounts for work that has never been done. The worst thing is that the two contracts concern the same stretch of road linking Borgne to Petit Bourg de Borgne.

However, the road remains in a sorry state while Agritrans S.A and Betex have pocketed a most of the amount due. It’s nothing very serious, had probably thought leaders and former officials of these firms, until the publication of the Court of Accounts’ second Report. The two companies were supposed to be engaged in agriculture, the growing of bananas, to be exact. Report N° 1 lacked precision on the degree of corruption of these companies which, for the most part, were only fronts in order to embezzle funds intended for Haiti’s development and the improvement of people’s living conditions.

As a result, the judges of the Court of Auditors had promised the publication of a second Report in which the auditors would deepen their investigation by providing details that could allow justice to be served, through the Government Commissioner (Prosecutor) taking up the case. But until then, nobody was worried, starting with the Head of State, who had never made much of the Court of Accounts’ audits. He always thought that the PetroCaribe case was fabricated by his political opponents to get at him because they could not sink him politically. President Jovenel Moïse therefore continued to taunt the opposition that he thought could not overthrow him much less bring the PetroCaribe case to justice. But the PetroChallengers have never let go of the case. Far from it! They have kept the judges of the Court of Auditors under pressure as they work on the second Report. Originally scheduled for the beginning of May 2019, due to lack of time its release was postponed until the end of May.

But fearing a second postponement, the political opposition and the PetroChallengers of the group “Kot Kòb PetroCaribe” (Where’s the PetroCaribe money?) and “Nou Pap Domi” (We’re not sleeping) launched a series of sit-ins and demonstrations in front of the headquarters of the CSC/CA so that the judges would publish the much awaited results of their work on this case. And for good reason. Opponents need support to push their demands and their call for the president’s resignation. Especially since the dismissal of Prime Minister Jean Henry Céant in March, Haiti’s government has been at a standstill. The interim and nominated Prime Minister Jean-Michel Lapin will become a sacrificial lamb for Jovenel, who is already in great political difficulty and out of ideas. The nominated prime minister clings to his post even as the opposition uses him to more easily reach its real target, that is Jovenel Moïse.

THE OPPOSITION IS DEMANDING JOVENEL MOÏSE’S INDICTMENT FOR MISAPPROPRIATION OF PUBLIC FUNDS AND CORRUPTION.

In the wake of successive failures in Parliament, three times in less than a month, to carry out a meeting for the stated purpose of ratifying Lapin’s General Policy Statement, the opposition had stepped up pressure on the Court of Auditors to make its final Report on the use of PetroCaribe Funds in the hope that the President would be clearly singled out in the Report. Finally, when everything seemed blocked in Parliament on ratifying the interim Prime Minister, the Court gave its Report No. 2 to the President of the Senate, Carl Murat Cantave. The judges were so under pressure that the Report was fraught with errors. They had to file a corrected version in the office of the Speaker of the Senate. What does it matter? The Report, long-awaited by the general public and the opposition in particular, is now published. And the PetroChallengers were not mistaken. The President of the Republic, Jovenel Moïse, is at the heart of a corruption scandal that exceeds the expectations of his political opponents.

Thus, with this famous Report’s publication on Thu., May 30, 2019, Haiti caught fire. Unsurprisingly, but still with excitement, the country has discovered how deep the harm is. The corruption here is on a large scale and at a level that suggests that this country will have difficulty recovering from its sad fate. The CSC/CA revelations, that in a way merely confirm what everyone already knew, have brought the spark that all actors and sectors seeking to extirpate Jovenel Moïse from the National Palace expected. But in this 612-page Report, the verifiers are engaged in a real job of surgery. From the regime of the late President René Préval to Michel Martelly, everything has been Reported down to the last detail. All the contracts awarded under these various governments have been scrutinized for irregularities, which leave no doubt as to the fraudulent nature of these contracts. Report N ° 2 confirms the role played by all the governments that have benefitted from these millions of dollars intended for Haiti’s development to engender a system of state corruption whose consequence on the national economy puts in danger the nation’s very survival.

In this Report, we discover incredible things about private firms that have benefitted, with the complicity if not the zeal of high officials, in institutions and governments, to plunder the coffers of the State and the Treasury. In this work of ants carried out by the Court of Auditors according to a methodology begun in the first Report, we can understand why, from the moment these revelations were in the public square, it has become difficult even for the regime’s biggest supporters to not feel embarrassed and threatened.

But a question remains to be asked: is it the President of the Republic in the exercise of his duties who is implicated or the entrepreneur Jovenel Moïse, before he became President, who is soaked to the neck in this ocean of corruption and looting of state coffers? In this context, the question may seem surprising for some as the whole country is demanding the president’s resignation. And all the organized sectors, together with the PetroChallengers and the opposition in particular, are demanding Jovenel Moïse’s indictment for misappropriation of public funds and corruption.

Since the publication of this famous Report No. 2, we have seen that Jovenel Moïse’s political future hangs by a thread. We are witnessing a second operation “closed country” (“Pays Lock”) and few people still believe that the President can once again come out victorious from this stand-off he has engaged with the country as a whole. If we go back into the Report and read it without a second thought, we will see that the Report mentions the companies owned or directed, certainly, by Jovenel Moïse, but long before he became President of the Republic. All the malfeasance that has been committed concerns the period when he was a “civilian.” So this has nothing to do with his actions during his presidential term. For the time being, as long as there is no investigation into his management as head of state under the Constitution, he cannot be tried for embezzlement of public funds.

The facts for which he is reproached predate his accession to power. According to the law, Jovenel Moïse can boast of having done nothing wrong in the exercise of his presidential duties. At no time in the two Reports did the judges of the Court of Auditors speak of the President of the Republic being engaged in the raiding of state coffers or the embezzlement of public funds. They recounted logically and sensibly the actions of the CEO of the firms Agritrans S.A and Betex who participated in this vast movement of corruption erected as a state system to empty the public coffers. That being the case, can we today dissociate Citizen Jovenel Moïse, former CEO of agribusiness companies, and Jovenel Moïse, who has since become President of the Republic? That’s the whole debate.