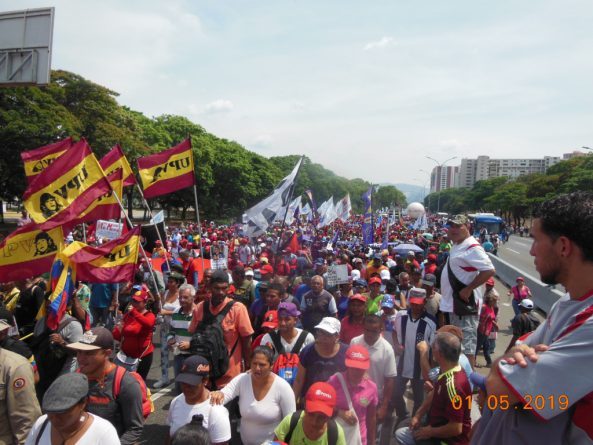 We will never know how large the mobilization of the Chavista people would have been this May Day if, on the eve, there had been no attempt at a coup d’état encouraged without dissimulation by the United States, and that involved a handful of military personnel and militants of Popular Will, among them the deputy Guaidó and the now fugitive from justice Leopoldo López.

But everything seems to indicate that this new attack on Venezuelan democracy spurred many people who, in less pressing circumstances, might have taken advantage of the holiday to share as a family or to devote themselves to more domestic matters.

Whole families, tens of thousands of people traveled the long journey from Longaray, in El Valle, to the Miraflores Palace, via the highway to Plaza Venezuela, then crossing Avenida Bolívar via Plaza O’Leary, in an estimated travel time of four hours.

In the environment, what was said: the feeling that the most undemocratic of the Venezuelan right came from an important defeat. In addition, the certainty that the popular mobilization is fundamental to ward off the worst aggressions, the deep discomfort due to the deterioration of the material conditions of the Venezuelan people, and the desire for more and better participatory and protagonist democracy.

I share with you this modest graphic and audiovisual testimony of an extraordinary day.