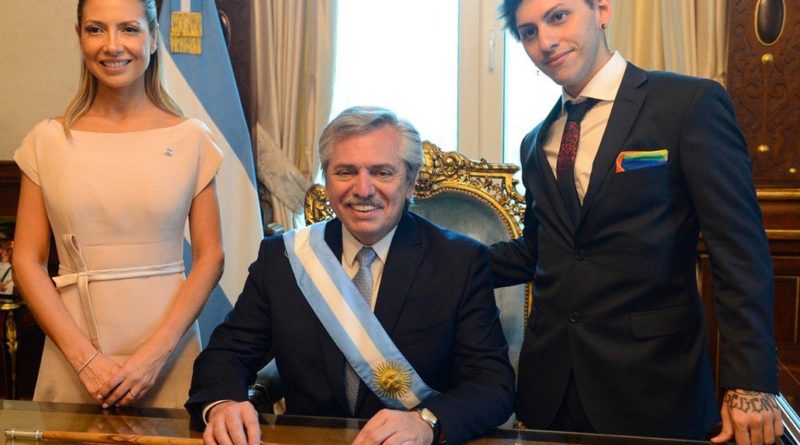 Estanislao Fernández, the 24-year-old gay son of Argentina’s new president Alberto Fernández who is also a popular drag queen named Dyhzy, appeared at his father’s inauguration and stood for official photos with a rainbow pocket square which he later revealed to be a folded-up LGBTQ Pride flag. Argentine press and social media reacted immediately with messages of support after seeing the rainbow in his pocket.

Alberto Fernández has called his son “his greatest pride.”

After the inauguration Estanislao posted an Instagram story in which he whipped out the flag.

the son of the new argentina's president took the presidential family picture with the lgbt+ flag in his pocket 🥺🥺 pic.twitter.com/UKyxDgKEAc

Earlier in November, Alberto Fernández told the press Estanislao was “one of the most creative persons” in his life (apologies for the translation): “My son is a rights activist in that community, I would worry if my son was a criminal, but he is a great man. In that world, which I don’t know much about, [he] seems to be respected and very recognized. I have pride in my son, how can I not be proud?”

Below some Instagram posts by his drag persona Dyhzy.

Featured image: Alberto Fernández with his son Estanislao and his partner Fabiola Yáñez, in the presidential chair. / Presidency Press