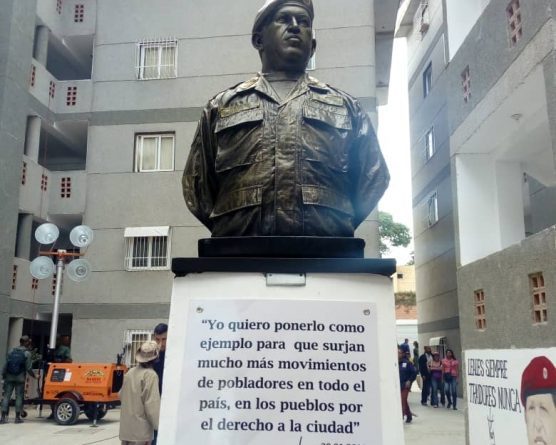 With the delivery by President Nicolás Maduro, this Thursday, May 16, of the last 48 homes of the new Amatina socialist community, in Antímano, Caracas, an important cycle is closed on one of the most emblematic experiences of people’s power during the Bolivarian revolution.

In total, Campamento de Pioneros, an organization in the Movement of Settlers, built 137 houses in Amatina, the first 29 of which were delivered in 2013 and another 60 in 2017.

The cycle started on January 8, 2011. That day, together with the Movement of Settlers, Commander Chávez ordered the beginning of the process of expropriation and temporary occupation of the idle land located in the El Algodonal sector, with an area of 9,113,48 square meters, owned by Empresas Polar .

RELATED CONTENT: A Day in a Venezuelan Chavista Stronghold: Communal Resistance in Caracas

Just twelve days later, Chávez made an appearance in Amatina with part of his cabinet. In dialogue with the members of the movement, he informed the country: “Look, this is going to be one of the first areas … Avivir … Vital Areas for Homes and Residences … This is going to be, perhaps, the first of the Avivir … here the headquarters is in the warehouse itself, and the commander is not Chávez, the commander is the people, the settlers, that is the true commander here. ”

The meeting of Chávez with the Movement of Settlers and Villagers was perhaps the culminating moment of the impressive deployment that the commander initiated the first days of December 2010, to know first-hand the serious effects produced by the rains (or by capitalism, as Chávez himself corrected several times), holding numerous assemblies in popular neighborhoods. The situation was emergency: around 120 thousand people had been left homeless.

That day, Chávez gave an outstanding lecture about the foolproof confidence that, under the most difficult circumstances, the revolutionary political leadership must have in the capacities of the organized people.

For Renat Paruta, Amatina spokesperson, “more important than the delivery of housing, is to make clear what we are capable of doing with self-managed policy. The whole process of execution of the project, financial execution, control, etc., we did as a movement, with the families incorporated. The housewife, who was attending to the family, the husband, the kids, ended up being a spokesperson for a grassroots group, later a spokesperson for the community, then joined the work and ended up being the construction worker, in the case of Juana, who today is responsible for production, because she is a baker. Who would have imagined that a housewife was going to end up being the head of construction workers in the field of building, structurally. There is Edith, a lady who lasted almost twenty-four years locked up in a house, attending to her disabled daughter, she only went to the hospital, she did not share with the neighbors. Today she is one of the leaders of Amatina. ”

According to Juan Carlos Rodríguez, “self-management is a political bet, it is not a bet on construction. That the popular organization is empowered and develops capacity to do; but for that it is necessary to transfer power. What we have built in Amatina and in the other pioneer camps has been with that approach: from the transfer of power, the community organizes and builds its homes, develops capacities. Pioneers’ camps have produced many comrades who later assume responsibilities and leadership in other political spaces, constructive, popular organization. Self-managed processes are a training school for cadres. And it is important to rescue that: self-management is a political bet for the construction of a social fabric. People can not develop capabilities if they do not have the opportunity to do so. In Amatina we could have advanced much faster if there had been more favorable conditions.”

In addition to the 137 houses, the new Amatina socialist community has eight other spaces, almost all under construction: bakery (already in operation), a Simoncito, Barrio Adentro, radio, library, auditorium, communal cinema and camp office.

“A cycle is closed, but there are still many things to be built,” said Juan Carlos Rodríguez. “The construction of a community is something that never ends, it is a permanent construction process”. On the current status of the struggle for the right to the city, he conveyed the position of the movement: “This is a subject that now needs to be re-launched, because the struggle for land has been relegated, also by the very juncture that the country is facing right now. That fight has been stopped. There are many people organized according to the struggle for the land, there is still a popular force to move in that direction”.

Fight for the right to the city, for self-managed policy: towards there, the Great Venezuela Housing Mission must continue to aim.