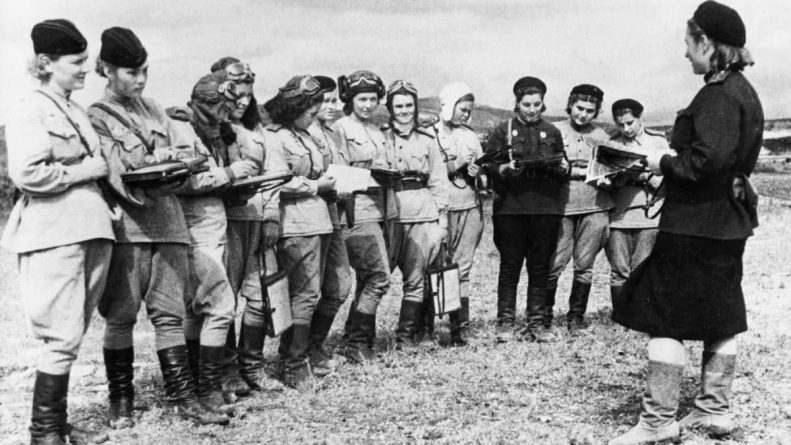 Members of the 588th Night Bomber Regiment decorated their planes with flowers … and dropped 23,000 tons of bombs.

It was the spring of 1943, at the height of World War II. Two pilots, members of the Soviet Air Force, were flying their planes—Polikarpov Po-2 biplanes, built mainly of plywood and canvas—over a Soviet railway junction. Their passage was on its way to being a routine patrol … until the pilots found themselves confronted by a collection of German bombers. Forty-two of them.

The pilots did what anyone piloting a plane made of plywood would do when confronted with enemy craft and enemy fire: they ducked. They sent their planes into dives, returning fire directly into the center of the German formation. The tiny planes’ flimsiness was in some ways an asset: their maximum speed was lower than the stall speed of the Nazi planes, meaning that the pilots could maneuver their craft with much more agility than their attackers. The outnumbered Soviets downed two Nazi planes before one of their own lost its wing to enemy fire. The pilot bailed out, landing, finally, in a field. The people on the ground, who had witnessed the skirmish, rushed over to help the stranded pilot. They offered alcohol. But the offer was refused. As the pilot would later recall, “Nobody could understand why the brave lad who had taken on a Nazi squadron wouldn’t drink vodka.”

The brave lad had refused the vodka, it turned out, because the brave lad was not a lad at all. It was Tamara Pamyatnykh, one of the members of the 588th Night Bomber Regiment of the Soviet Air Forces. The 588th was the most highly decorated female unit in that force, flying 30,000 missions over the course of four years—and dropping, in total, 23,000 tons of bombs on invading German armies. Its members, who ranged in age from 17 to 26, flew primarily at night, making do with planes that were—per their plywood-and-canvas construction—generally reserved for training and crop-dusting. They often operated in stealth mode, idling their engines as they neared their targets and then gliding their way to their bomb release points. As a result, their planes made little more than soft “whooshing” noises as they flew by.

The Night Witches were largely unique among the female combatants — and even the female flyers—of World War II. Other countries, the U.S. among them, may have allowed women to fly as members of their early air forces; those women, however, served largely in support and transport roles. The Soviet Union was the first nation to allow women to fly combat missions—to be able, essentially, to return fire when it was delivered. These ladies flew planes; they also dropped bombs. Last week, one of the most famous of the Night Witches—Nadezhda Popova, a commander of the squad who flew, in total, 852 of its missions—passed away. She was 91. And the obituaries that resulted, celebrations of a life and a legacy largely unknown to many of us here in the U.S., serve as a reminder of the great things the female flyers accomplished. Things made even more remarkable considering the limited technology the woman had at their disposal. The Witches (they took the German epithet as a badge of honor) flew only in the dark. Because of the weight of the bombs they carried and the low altitudes at which they flew, they carried no parachutes. They had no radar to navigate their paths through the night skies—only maps and compasses. If hit by tracer bullets, their craft would ignite like the paper planes they resembled. Which was not a small concern: “Almost every time,” Popova once recalled, “we had to sail through a wall of enemy fire.”

Their missions were dangerous; they were also, as a secondary challenge, unpleasant. Each night, in general, 40 planes—each crewed by two women, a pilot and a navigator—would fly eight or more more missions. Popova herself once flew 18 in a single night. (The multiple nightly sorties were necessary because the modified crop-dusters were capable of carrying only two bombs at a time.) The women’s uniforms were hand-me-downs from male pilots. And their planes had open cockpits, leaving the women’s faces to freeze in the chilly night air. “When the wind was strong it would toss the plane,” Popova noted. “In winter, when you’d look out to see your target better, you got frostbite, our feet froze in our boots, but we carried on flying.”

Once, after a successful flight—which is to say, a flight she survived—Popova counted 42 bullet holes studding her little plane. There were also holes in her map. And in her helmet. “Katya, my dear,” the pilot told her navigator, “we will live long.”

Despite all this bravado, however, the female fighter pilots initially struggled to earn the respect of their brothers in arms. The Night Bomber Regiment was one of three female fighter pilot units created by Stalin at the urging of Marina Raskova—an aviation celebrity who was, essentially, “the Soviet Amelia Earhart.” Raskova trained her recruits as pilots and navigators, and also as members of maintenance and ground crews. She also prepared them for an environment that preferred to treat women as bombshells rather than bombers. One general, male, initially complained about being sent a “a bunch of girlies” instead of soldiers. But the women and their flimsy little crop-dusters and their ill-fitting uniforms and their 23,000 tons of ammunition soon proved him wrong. And they did all that while decorating their planes with flowers and using their navigation pencils as lipcolor.