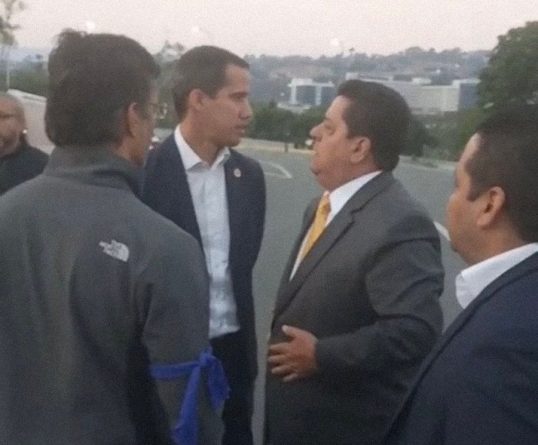 The opposition deputy Edgar Zambrano was arrested on Wednesday night by officials of the Bolivarian Intelligence Service (Sebin), in the La Florida sector, in Caracas. The parliamentarian reported in his Twitter account that he was “surprised” by the Sebin when he was in a vehicle, after leaving the headquarters of Acción Democrática, the party where he works, in La Florida sector, in Caracas.

Zambrano said he refused to leave the vehicle, so the Sebin used a crane to move the parliamentary car to El Helicoide, police headquarters in the capital city.

The deputy is one of the seven parliamentarians from whom the Constituent Assembly lifted immunity, after participating in the failed coup attempt against the government of President Nicolás Maduro.

“A few minutes ago one of the heads of the coup d’état was arrested,” confirmed the president of the Constituent Assembly, Diosdado Cabello, in his TV show “Con el Mazo Dando”. He explained that a preliminary hearing was not needed to lift deputy Zembrano’s parliamentary immunity because he committed a “crime in flagrante delicto” when he was caught in a video on the bridge where the head of the National Assembly (AN), Juan Guaidó, called for a military uprising against the government of President Nicolás Maduro.

“While they (opposition) continue to underestimate us, better for the Bolivarian revolution,” added the political leader, who emphasized that with this action Chavismo begins to “remoralize.” According to Cabello, the opposition sectors that participated in the attempted coup “will pay for what they did”. He added: “Here there will be justice, we have no problem in saying it.”

This is one of the numerous videos in which the presence of Edgar Zambrano is observed in the coup of April 30.

When the parliamentarian was arrested, some supporters of antichavismo present in the place sang the anthem of Acción Democrática (AD), the party where Zambrano militates.

Reactions
After the arrest, the head of Parliament, Juan Guaidó, considers that the Executive tries to “disintegrate” the Legislative Power, “but they will not achieve it,” he wrote on his Twitter account. For his part, the deputy Henry Ramos Allup, who also lost his parliamentary immunity, said that with the arrest has “violated” Zambrano’s immunity, although the Supreme Court of Justice ordered in a ruling for the Constituent Assembly to waive immunity of the legislator.