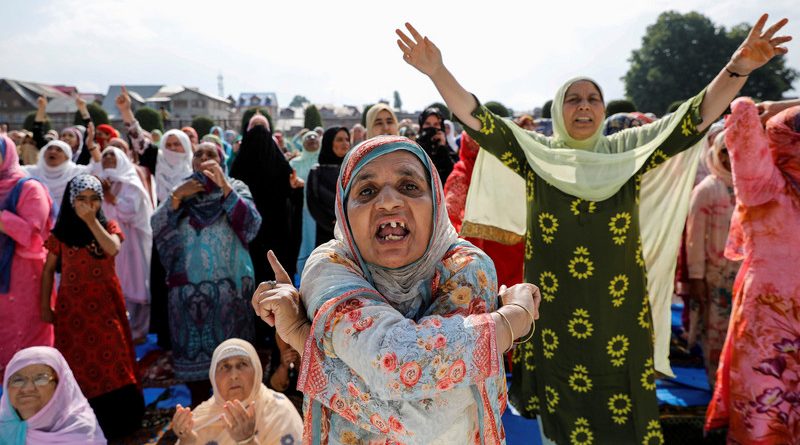 Palestinians are calling for solidarity with Kashmir following the Indian government’s move to revoke the state’s autonomy while imposing an unprecedented lockdown.

“As Palestinians, we deeply feel the suffering of the people in Kashmir under military repression that in so many cases is similar to Israeli forms of subjugation and control,” the Palestinian BDS National Committee (BNC) said on Tuesday.

The BNC is the steering group for the boycott, divestment and sanctions campaign for Palestinian rights.

The BNC notes that for years India has been “borrowing Israel’s methodology and ideology and using Israeli weapons in its control over Kashmir.”

“The Israeli weapons that India uses to oppress Kashmiris have been ‘field-tested’ on Palestinian bodies,” the BNC states.

“Our campaign for a comprehensive military embargo on Israel, therefore, is directly linked to opposing global militarization, including militarization of Kashmir.”

India has in recent years been the largest customer in the world for Israeli weapons.

Modi won re-election in a landslide last May.

According to Indian writer Pankaj Mishra, the revocation of Article 370 is “part of a revanchist fantasy of ‘Akhand Bharat,’ or Undivided India – a vision which includes reclaiming the part of Kashmir ruled by Pakistan.”

“The government prepared for its bombshell … with a massive infusion of security forces into Kashmir, which is already one of the most militarized places on earth,” Mishra states.

“It ordered the house arrests of opposition leaders and evacuation of Indian students and tourists, an indefinite curfew, and the shutdown of all modes of communications, including telephone landlines.”

Indian-ruled Kashmir remains cut off from the world, especially the populous Kashmir Valley.

“You can say that the entire eight million population has been incarcerated like never before,” according to Shah Faesal, a former official in the Indian civil service who now heads a Kashmiri political party.

Indian state media have tried to claim that the situation in Kashmir is “normal and peaceful.”

The government hopes that by isolating Kashmir it can prevent news of its repression of protests from reaching the outside world.

But news has nonetheless come out on how Indian forces are using tear gas and pellet guns against protesters.

“The history of atrocities and human rights violations are not new to Kashmir,” the BNC states.

The status of Kashmir has been in dispute since British-ruled India was partitioned in 1947 and gained independence as modern India and Pakistan.

India controls more than half the territory of Kashmir, including the Kashmir Valley. Pakistan controls about a third of the territory, and China the rest.

In 1947, Pakistani militias entered part of Kashmir. Following this, the princely ruler of Kashmir, a Hindu, chose to join his Muslim-majority state to Hindu-dominated, but constitutionally secular, India.

India’s first prime minister, Jawaharlal Nehru, promised that the people of Kashmir would be given a referendum on whether they wanted to remain part of India.

In 1948, the UN Security Council backed the referendum.

However, the plebiscite has never been held and India has ruled the territory by force rather than consent.

Modi’s move against Kashmir and its people looks a lot like how Israel has unilaterally annexed Syria’s occupied Golan Heights and Palestine’s occupied East Jerusalem.

Israel now appears to be moving towards annexation of the rest of occupied West Bank.

Since the rise to power of Modi’s Hindu nationalist BJP, India has increasingly turned to Israel as a model for its brutal repression of resistance to its rule in Kashmir.

“Today, the Modi government has literally taken inspiration from Israel’s settlement project to enable forced demographic changes on the ground,” according to the BNC.

Indian government efforts to manipulate the demographics of Kashmir by moving Hindus into the state have previously been described even in Israeli media as “an Israel-style policy of creating settlements in occupied territory.”

In addition to the unprecedented repression in Kashmir, Modi’s move is escalating tensions with Pakistan, which like India possesses nuclear weapons.

India and Pakistan have already fought three wars over Kashmir.

“We call for international pressure on the government of India to reverse its latest measures that violate the rights of the people of Kashmir under international law and to recognize and respect those rights,” the BNC states.

It also appeals to “people of conscience in India” to “work towards ending India’s military and security alliance with Israel.”

This would “end India’s shameful complicity in Israel’s suppression of Palestinian freedom, justice and equality,” the BNC says.

Featured image: Kashmiri women in Srinagar shout pro-freedom slogans before offering Eid-al-Adha prayers at a mosque during restrictions following the scrapping of the special constitutional status for Kashmir by the Indian government, 12 August. Danish Siddiqui Reuters